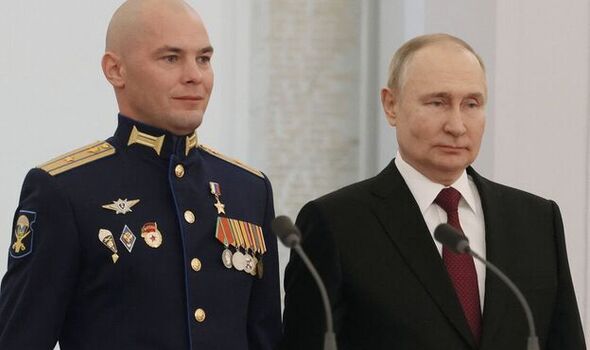 The Russian leader said the Kremlin had not “gone mad” while bragging his weapons were more advanced than the West’s.

And he argued his nuclear sabre-rattling was “not a factor provoking an escalation of conflicts, but a factor of deterrence”.

The tyrant predicted fighting in Ukraine would be “long” but described gains in southern and eastern Ukraine as “a significant result for Russia,” noting the “Sea of Azov has become Russia’s internal sea”. He added that: “Peter the Great fought to get access to the Sea of Azov.”

Asked by a member of Russia’s Human Rights Council to pledge their nation would not be the first to use nukes, Putin disagreed.

He said: “If it doesn’t use it first under any circumstances, it means it won’t be the second to use it either, because the possibility of using it in case of a nuclear strike on our territory will be sharply limited.”

The despot rejected Western criticism that those statements amounted to an escalation. He said: “We haven’t gone mad. We are fully aware of what nuclear weapons are. We have them – and they are more advanced and state-of-theart than what any other nuclear power has.”

Moscow accused Kyiv of carrying out drone attacks on three Russian airfields, two of them hundreds of miles from Ukraine.

But Ukraine’s leader, Volodymyr Zelensky, hit back: “If Russia feels backed into a corner, it has only itself to blame.”

He added that whoever started an unprovoked and criminal war must lose – and bear responsibility.

Mr Zelensky also demanded that Ukraine and the world receive guarantees of peace and security.

He said: “Apart from the Ukrainian victory, any other option will be a mistake.”

Roman Starovoit, governor of the Kursk region of western Russia, has shown off concrete anti-tank structures being installed in fields amid efforts to bolster defences inside the country. But British defence chiefs say Moscow is doing this to promote nationalism.

Pope Francis has compared Russia’s invasion of Ukraine to a Nazi extermination operation that killed some two million people, mostly Jews, in the Second World War.

He told Polish pilgrims: “History is repeating itself. We see now what is happening in Ukraine.”

Nato chief Jens Stoltenberg said yesterday that Moscow wanted to stall fighting over the winter to build for an assault next year.

But he said Nato members were continuing their “unprecedented” supply of arms to Ukraine.

Meanwhile, thousands of new anti-tank weapons will be delivered to Ukraine after British stockpiles were donated to repel Russia.

By Ron Bousso and Bate Felix ABERDEEN, Scotland (Reuters) – France’s Total <TOTF.PA> is considering stopping sales of fuel oil to power markets as the energy giant seeks to reduce its carbon footprint and grow its renewable power business, its chief executive told Reuters. Fuel oil is one of the most carbon intensive refined oil […]

By JIM VERTUNO and JAKE BLEIBERG AUSTIN, Texas (AP) — Police had enough officers and firepower on the scene of the Uvalde school massacre to have stopped the gunman three minutes after he entered the building, and they would have found the door to the classroom where he was holed up unlocked if they had […]

By John Whitesides (Reuters) – Liberal challenger Jill Karofsky won a hotly contested race for the Wisconsin Supreme Court on Monday, beating a conservative incumbent in state elections marred by court challenges and worries about health risks from the coronavirus pandemic. Karofsky upset Dan Kelly, who was endorsed by Republican President Donald Trump, for a […]

Harry and Meghan ‘to appear in second Spotify podcast for Xmas’, expert claims