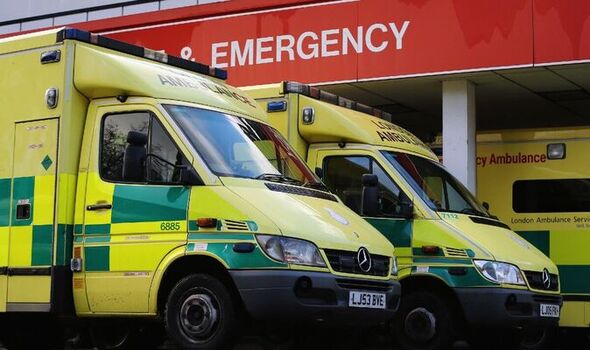 Elderly people who fall at home are unlikely to get an ambulance as a result of upcoming strikes, NHS sources have claimed. The country is set to be rocked by nationwide strike action at ambulance trusts, scheduled to take place on December 21 and 28. The strike action, which is their largest for 30 years, is a coordinated walkout planned by the three main ambulance unions – Unison, GMB and Unite.

While unions have said that “life and limb” cover will be provided during any industrial action, they are yet to clarify exactly what this will entail.

But older people who suffer from falls are thought to be unlikely to make it into this category.

Emergency calls deemed to be category one, which includes people with life-threatening illnesses or injuries, or category two, emergency calls, are expected to be prioritised.

But patients in category three, which is typically how falls are classed, and category four are unlikely to be sent an ambulance during the strikes.

Speaking to the Telegraph, an NHS source said: “Without a clear agreement that they should be exempt, elderly patients who have called an ambulance following a fall could be left waiting longer or not be responded to at all during the strike period as they wouldn’t typically be included under category one and two calls.

“We’ve got the system of category one, category two, which says these are the life threatening illnesses – but if it was my mum who lived 70 miles away from me, who called an ambulance on a strike day and I was 70 miles away, the niceties of a category one call would be completely lost on me.”

Today, Downing Street refused to deny that the Prime Minister is concerned patients would die during the strikes.

Mr Sunak’s official spokesman said it would not be helpful to “speculate”, adding: “I think what our focus is now is on mitigating any potential detrimental impact these strikes could have.”

David Cameron insists Brexit referendum was ‘thought through’ and necessary

David Cameron says Brexit referendum ‘thought through’ When you subscribe we will use the information you provide to send you these newsletters.Sometimes they’ll include recommendations for other related newsletters or services we offer.Our Privacy Notice explains more about how we use your data, and your rights.You can unsubscribe at any time. David Cameron defended his […]

Biden's first month was a 'honeymoon,' but bigger challenges loom ahead

By Trevor Hunnicutt WASHINGTON (Reuters) – One month into the job, President Joe Biden is on the cusp of securing a bigger economic rescue package than during the 2009 financial crisis. He has wiped out his predecessor Donald Trump's policies from climate change to travel bans, while the U.S. daily COVID-19 vaccine distribution rate grew […]

This is another News Portal > World News > Coronavirus could erase $211 billion from Asia-Pacific economies: S&P