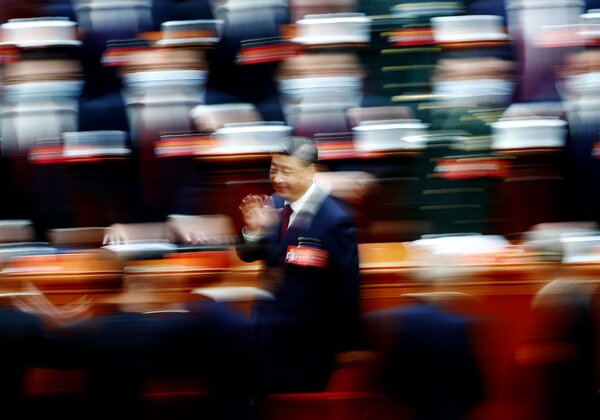 Please accept my country’s gratitude and congratulations as you embark on your third term as general secretary of the Chinese Communist Party. Though it may not be obvious now, we believe your reign will one day be recognized as one of the great unexpected blessings in the history of the United States, as well as that of other free nations.

A few exceptions aside, this was not what was generally expected when you first became paramount leader 10 years ago.

Back then, many in the West had concluded that it was merely a matter of time before China was restored to its ancient place as the world’s dominant civilization and largest economy. China’s astonishing annual growth rates, frequently topping 10 percent, put our own meager economic progress in the shade. In one industry after another — telecommunications, banking, social media, real estate — Chinese companies were becoming industry leaders. Foreign nationals flocked to live, study and work in Shanghai, Hong Kong and Beijing; well-to-do American parents boasted of enrolling their children in Mandarin immersion classes.

At the policymaking level, there was widespread acceptance that a richer China would be vastly more influential abroad — and that the influence would be felt from Western Europe to South America to Central Asia to East Africa. Though we understood that this influence could at times be heavy-handed, there was little political will to curb it. China seemed to offer a unique model of capitalist dynamism and authoritarian efficacy. Decisions were made; things got done: What a contrast with the increasingly sclerotic free world.

Not that we thought that all was well with China. Your rise coincided with the dramatic downfall of your principal rival, Bo Xilai, amid rumors of a possible coup. Longer-term challenges — widespread corruption, an aging population, the role of the state in the economy — required prudent management. So did the international resentments and resistance that swiftly rising global powers invariably engender.

Still, you seemed up to the job. Your family’s bitter experience during the Cultural Revolution suggested that you understood the dangers of totalitarianism. Your determination to crack down on corruption seemed matched by your willingness to further liberalize your economy — demonstrated by your appointment of the competent technocrat Li Keqiang as your premier. And your stay with a family in Iowa in the 1980s raised hopes that you might harbor some fondness for America.

Those hopes haven’t just been disappointed. They’ve been crushed. If there’s now a single point of agreement between Donald Trump and Joe Biden — or Tom Cotton and Nancy Pelosi — it’s that you must be stopped.

How did you do it?

Your war on corruption has turned into a mass purge. Your repression in Xinjiang rivals the Soviet gulags. Your economic “reforms” amount to the return of typically inefficient state-owned enterprises as dominant players.

Your de facto policy of snooping, hacking and intellectual-property theft has made Chinese brands like Huawei radioactive in much of the West. In 2020 F.B.I. Director Christopher Wray noted in a speech, “We’ve now reached the point where the F.B.I. is opening a new China-related counterintelligence case every 10 hours.”

Your zero-Covid policy has, at times, transformed China’s great metropolises into vast and unlivable prison colonies. Your foreign policy bullying has mainly succeeded in encouraging Japan to rearm and Biden to pledge that America will fight for Taiwan.

All of this may make your China fearsome. None of it makes you strong. Dictatorships can usually exact obedience, but they struggle to inspire loyalty. The power to coerce, as the political scientist Joseph Nye famously observed, is not the same as the power to attract. It’s a truism that may soon come to haunt you — much as it now haunts Vladimir Putin as his once-fearsome military is decimated in Ukraine.

You could still change course. But it seems unlikely, and not just because old men rarely change. The more enemies you make, the more repression you need. Surrounding yourself with yes men, as you are now doing, may provide you with a sense of security. But it will cut you off from vital flows of truthful information, particularly when that information is unpleasant.

The Achilles’ heel of regimes like yours is that the lies they tell their people to maintain power ultimately become lies they tell themselves. Kicking foreign journalists out of China makes the problem worse, since you no longer have the benefit of an outside view of your compounding troubles.

None of this solves our problems here in the United States. In many ways, your truculence exacerbates them, not least in the increasing risk that we may someday come to blows. But in the long-run competition between the free and unfree worlds, you are unwittingly helping make the case for the free. To adapt a line from my colleague Tom Friedman, does anyone want to be your China for a day? I doubt it.

Which is why we want to say thanks. We know our Union is faulty; we know our leaders are flawed; we know that our society’s edges are frayed. To take one hard look at you is to prefer all this to your dismal alternative.

Rohingya genocide, Belarus, AstraZeneca trials: Here’s what you need to know. By Natasha Frost Good morning. We’re covering the first testimony from soldiers involved in the mass killings of Rohingya Muslims in Myanmar, the attempted expulsion of a Belarusian opposition leader and the sudden pause of a global coronavirus vaccine trial. ‘Kill all you see, […]

Opinion | The War on Truth Reaches Its Climax

I began writing a column for The Times way back in 2000. My beat was supposed to be economics and business. But I couldn’t help noticing that one of that year’s contenders for the presidency was systematically making false claims about his policy proposals. George W. Bush kept insisting that his one-percent-friendly tax cuts were […]