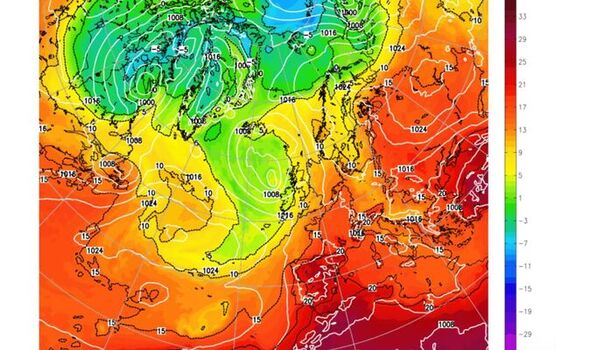 High pressure, which would drive hotter conditions, is currently favourite, although this week will be a waiting game. Some temperature charts show the mercury rocketing towards 35C by Thursday, while others predict the heat to hold off until the weekend.

Jim Dale, meteorologist for British Weather Services, said: “There is the potential for high pressure to come in from the Azores and settle over the UK.

“This would bring higher temperatures in time for the weekend, particularly for southern Britain, with a more unsettled picture further north.

“However, the jet stream looks like it may invigorate and push this high pressure away.

“So, we are expecting a battle between these two features to decide on the outcome for the bank holiday.”

Current outlooks suggest the Azores High, the driver of July’s historic heatwave and hot weather through early August, will win.

However, the jet stream, currently swooping over Britain at speed threatens to shove it out of the picture, allowing the Atlantic to hurl wind and rain at the UK. 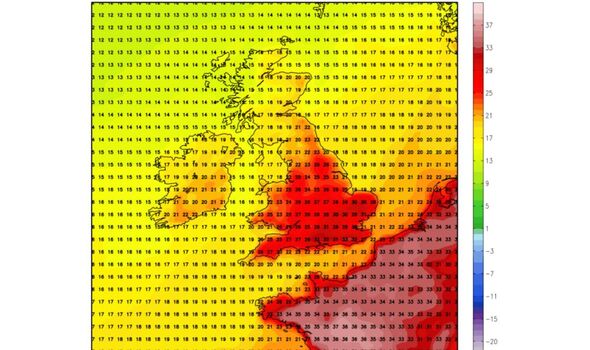 Mr Dale said: “At the moment, I favour high pressure winning, but if it does, it is more likely to become established across southern Britain.

“It is a case of waiting a bit longer to see how far the high pressure can push in, and how much of an influence the jet stream allows low pressure to push it out.

“We will have to wait and see.”

Britain is facing a hectic run up to the bank holiday as forecasters predict a roller-coaster ride of heavy showers and fluctuating temperatures.

Southern and south-eastern Britain will likely to swelter ahead of the weekend while Scotland and the north braces for rain.

Thermometers on Wednesday could surge into the low-30Cs in parts, according to the Met Office, although a full heatwave is unlikely.

Western and central regions will be in the firing line for the rain which will push temperatures into the 20Cs.

However, government forecasters agree varying weather models have made predicting the week’s weather a difficult task.

“If you have plans this week then please do keep up to date as the day-to-day details will vary.”

A ‘waving’ cold weather front drifting across the UK after mid-week threatens torrential rain and thunder across the east, he said.

This could give way to high pressure at the weekend, pushing temperatures up and driving drier weather, he added.

He said: “The uncertainty is due to a long weather front stretching out in the Atlantic and little bumps caused waves.

“On Thursday, it looks like pushing off to the east, but if it is a little further west, it could bring some welcome rain across east Anglia and the southeast.

“There is the potential for some thunderstorms with that humid air in place, and there could be some torrential downpours.

“It looks as though high pressure will be moving in as we go towards the weekend bringing a lot of dry weather for the bank holiday weekend.” 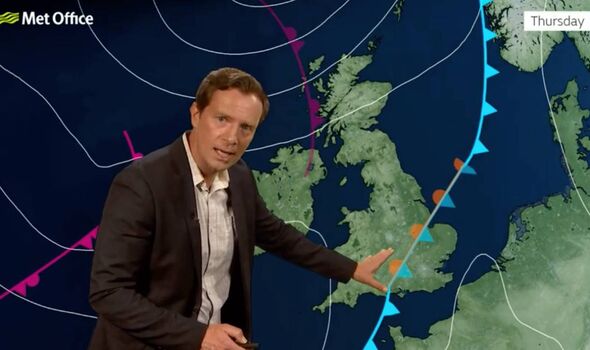 Weathertrending’s John Hammond agreed a cold front moving across the UK could shake the weather around a bit.

A humid blast on Wednesday and Thursday is likely to push temperatures in parts to 30C, he added.

He said: “There is a mixed bag of weather for the week ahead.

“Through Tuesday into Wednesday we introduce some muggy, more humid air from the south, and briefly temperatures could reach into the high-20Cs, possibly hitting 30C across parts of the southeast and east.

“But there is a big question mark over Thursday as a cold front will become slow-moving somewhere across eastern England, and that could give some useful rain.”

The bank holiday outlook is still uncertain, he explained, although early signals are for temperatures to fall.

“Eventually it will turn cooler as we head to next weekend,” he said.

“But there are huge uncertainties over the sort of weather we are going to get over the bank holiday.”

A deadly Mexican drug cartel has warned an enemy in a rival gang that they're 'coming to him' after allegedly tracking down his dog. A group of nine Honduran assassins from the Jalisco New Generation Cartel appeared in a video, armed with machine guns as they addressed a 'small-time trafficker known as Pepe'. The video, […]

BERLIN/HAMBURG (Reuters) – German companies with international experience and supply chains have been commissioned to help the government procure difficult-to-obtain supplies as part of the country’s response to the coronavirus crisis, a government document showed. According to the paper, seen by Reuters on Thursday, representatives of companies including BASF <BASFn.DE>, Lufthansa <LHAG.DE> and Volkswagen <VOWG_p.DE> […]

Spotlight will be on U.S. chief justice in Trump trial and in major cases

What is the G7 and why is the EU not an official member?

This is another News Portal > Business > Cooking the Books podcast: A guide to the free cash that can boost your home deposit