Chris Licht, the new chairman of CNN, has told employees that he is retooling the network’s programming.

This article is part of our Daily Business Briefing 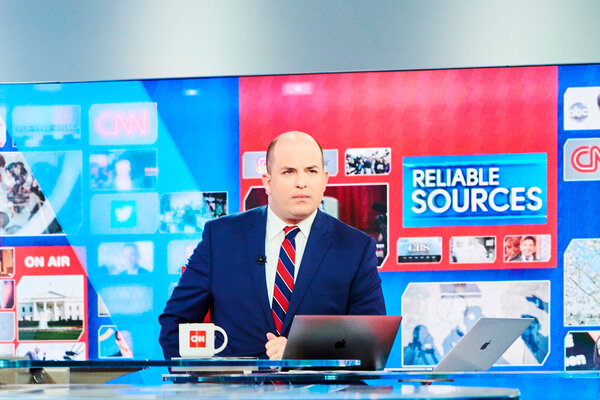 CNN is canceling “Reliable Sources,” its long-running media affairs show, and the reporter who hosted it, Brian Stelter, is leaving the network, the company said on Thursday.

The show’s last edition would be on Aug. 21, according to a spokesman for CNN.

“We appreciate his contributions to the network and wish him well as he embarks on new endeavors,” the spokesman said.

The cancellation of “Reliable Sources” — a show that has aired for about three decades — is one of the first major programming moves made by Chris Licht, the new chairman of CNN, who took over this spring after Discovery closed its merger with AT&T’s WarnerMedia.

Mr. Licht has told employees that he is planning to retool some of the network’s programming, including at 9 p.m., where the departure of Chris Cuomo has left a critical gap in prime time.

The spokesman said that the change was part of CNN’s “refreshed Sunday lineup,” which will feature a number of new programs including “Who’s Talking to Chris Wallace,” an interview program featuring the veteran Sunday show interlocutor.

The network and its website will continue covering the media industry. Oliver Darcy, a senior media reporter at CNN, will lead CNN’s Reliable Sources newsletter.

In a statement, Mr. Stelter said that he was grateful for the last nine years at CNN and thankful to viewers who tuned in.

“It was a rare privilege to lead a weekly show focused on the press at a time when it has never been more consequential,” Mr. Stelter said. “I’ll have more to say on Sunday.”

Amy Entelis, CNN’s executive vice president for talent and content development, said in a statement that Mr. Stelter would depart CNN as “an impeccable broadcaster.”

“We are proud of what Brian and his team accomplished over the years, and we’re confident their impact and influence will long outlive the show,” Ms. Entelis said.

News of the show’s cancellation was earlier reported by NPR.

The cancellation of “Reliable Sources” put Mr. Stelter, 36, an inveterate media reporter with an unflagging presence on Twitter, in the unusual position of being at the center of a story in an industry he covers.

Before he joined CNN, Mr. Stelter spent six years at The New York Times, where he became known for breaking big stories about the TV news industry. He was hired at The Times after he had founded a media news site, TV Newser, from his dorm room at Towson University.

Mr. Stelter’s contract at CNN stretched well into the future. The anchor told friends in the winter that he had signed a deal for another four years, according to three people with knowledge of the discussions.

Mr. Stelter was told of his show’s cancellation at a meeting with Mr. Licht on Wednesday, said two of the people, who spoke on condition of anonymity to relay confidential discussions.

News of Mr. Stelter’s departure from CNN comes less than a week after Jeffrey Toobin, a longtime legal affairs commentator at the network, announced he was leaving.

LONDON — While many European countries are entering second lockdowns, China’s strict tracing and broader control policies have helped the world’s largest luxury and travel retail market recover swiftly, at least within the country for the moment. Some 637 million people traveled within China over the past eight days in celebration of the country’s annual […]

Bernie Madoff, Architect of Largest Ponzi Scheme in History, Is Dead at 82

Bernard L. Madoff, the one-time senior statesman of Wall Street who in 2008 became the human face of an era of financial misdeeds and missteps for running the largest and possibly most devastating Ponzi scheme in financial history, died on Wednesday at the Federal Medical Center in Butner, N.C. He was 82. The Federal Bureau […]

NEW YORK (Reuters) – Asian equities were mostly firmer on Wednesday after a strong Wall Street session in which the S&P 500 hit an all-time high, rebounding from huge losses caused by the coronavirus pandemic. Both the S&P 500 and Nasdaq Composite set records soon after the opening bell following strong sales growth reported by […]

ECB to allot $1.7 billion at its seven-day tender: Reuters poll

Gloves are off! €1trn bloc of four EU states poised to cause MAJOR headache for Brussels