Mr. Herschmann had access to high-level discussions about the plans to overturn the 2020 election and activities in the lead-up to Jan. 6. 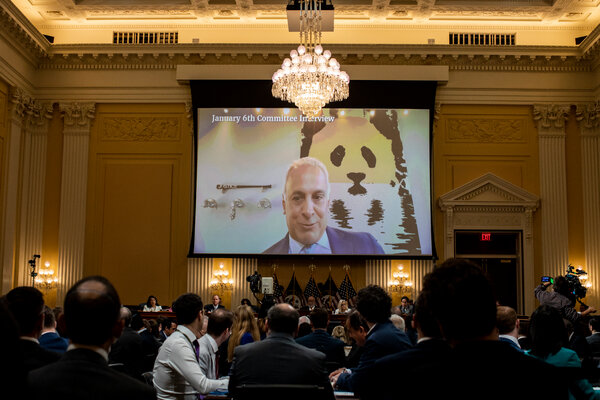 By Luke Broadwater and Maggie Haberman

Eric Herschmann, a lawyer who worked in the White House under former President Donald J. Trump, has received a subpoena from a grand jury looking into activities related to the Jan. 6 attack on the Capitol, the latest indication the Justice Department’s investigation is intensifying, according to two people familiar with the matter.

The subpoena seeks documents and testimony from Mr. Herschmann, who had access to high-level discussions about the plans to overturn the 2020 election, including efforts to interfere with the Justice Department and seize voting machines. It was unclear which of two federal grand juries had subpoenaed him: One is focused on the Jan. 6 attack itself, and the other has been investigating a scheme connected to the Trump campaign to try to overturn the election results using false slates of electors.

Mr. Herschmann is at least the fifth top White House official who has received a subpoena to testify in the federal investigation. Others include Pat A. Cipollone, the White House counsel; his deputy Patrick F. Philbin; and Greg Jacob, the top lawyer for Vice President Mike Pence. Mr. Pence’s chief of staff, Marc Short, also has testified in front of a grand jury.

The subpoena sent to Mr. Herschmann is yet another sign of the inquiry reaching into the inner circle around Mr. Trump, who is facing criminal, civil and congressional investigations on several fronts. They include investigations into the mishandling of highly sensitive documents, overvaluing properties and his efforts to cling to power after his election loss.

Mr. Herschmann has risen in visibility in recent weeks as the House committee investigating the attack has prominently used clips of his closed-door testimony before the panel. Sitting in an office with a black baseball bat with the word “justice” in capital letters on the wall behind him, Mr. Herschmann relayed expletive-laced anecdotes and rebukes of the lawyers Mr. Trump had been using to try to overturn the election.

Making a case against Trump. The House committee investigating the Jan. 6 attack is laying out a comprehensive narrative of President Donald J. Trump’s efforts to overturn the 2020 election. Here are the main themes that have emerged so far from eight public hearings:

An unsettling narrative. During the first hearing, the committee described in vivid detail what it characterized as an attempted coup orchestrated by the former president that culminated in the assault on the Capitol. At the heart of the gripping story were three main players: Mr. Trump, the Proud Boys and a Capitol Police officer.

Creating election lies. In its second hearing, the panel showed how Mr. Trump ignored aides and advisers as he declared victory prematurely and relentlessly pressed claims of fraud he was told were wrong. “He’s become detached from reality if he really believes this stuff,” William P. Barr, the former attorney general, said of Mr. Trump during a videotaped interview.

Pressuring Pence. Mr. Trump continued pressuring Vice President Mike Pence to go along with a plan to overturn his loss even after he was told it was illegal, according to testimony laid out by the panel during the third hearing. The committee showed how Mr. Trump’s actions led his supporters to storm the Capitol, sending Mr. Pence fleeing for his life.

Fake elector plan. The committee used its fourth hearing to detail how Mr. Trump was personally involved in a scheme to put forward fake electors. The panel also presented fresh details on how the former president leaned on state officials to invalidate his defeat, opening them up to violent threats when they refused.

Strong arming the Justice Dept. During the fifth hearing, the panel explored Mr. Trump’s wide-ranging and relentless scheme to misuse the Justice Department to keep himself in power. The panel also presented evidence that at least half a dozen Republican members of Congress sought pre-emptive pardons.

The surprise hearing. Cassidy Hutchinson, ​​a former White House aide, delivered explosive testimony during the panel’s sixth session, saying that the president knew the crowd on Jan. 6 was armed, but wanted to loosen security. She also painted Mark Meadows, the White House chief of staff, as disengaged and unwilling to act as rioters approached the Capitol.

Planning a march. Mr. Trump planned to lead a march to the Capitol on Jan. 6 but wanted it to look spontaneous, the committee revealed during its seventh hearing. Representative Liz Cheney also said that Mr. Trump had reached out to a witness in the panel’s investigation, and that the committee had informed the Justice Department of the approach.

A “complete dereliction” of duty. In the final public hearing of the summer, the panel accused the former president of dereliction of duty for failing to act to stop the Capitol assault. The committee documented how, over 187 minutes, Mr. Trump had ignored pleas to call off the mob and then refused to say the election was over even a day after the attack.

Mr. Herschmann was known for fighting back against the most extreme plans to try to overturn the election, including at an unhinged Dec. 18, 2020, Oval Office meeting in which three outside advisers sought to have the president direct the secretary of defense to seize voting machines to look for fraud and also to appoint a special counsel to potentially charge people with crimes.

“It got to the point where the screaming was completely, completely out there,” Mr. Herschmann told the committee in videotaped testimony. “I mean, you got people walking in — it was late at night, it had been a long day. And what they were proposing, I thought was nuts.”

Mr. Herschmann described a particularly intense moment with one of the outside advisers, Michael T. Flynn, the national security adviser Mr. Trump had fired in his first weeks in office. “Flynn screamed at me that I was a quitter and everything, kept on standing up and standing around and screaming at me,” Mr. Herschmann said “At a certain point, I had it with him, so I yelled back, ‘Either come over or sit your f-ing ass back down.’”

He said he also confronted Jeffrey Clark, a Justice Department employee who plotted to oust the acting attorney general and install himself atop the agency in an attempt to keep Mr. Trump in power.

A day after Jan. 6, Mr. Herschmann said he received an unexpected call from the conservative lawyer John Eastman, who had been working to keep Mr. Trump in office. To Mr. Herschmann’s surprise — even after the deadly riot — Mr. Eastman was still pushing to fight the election results.

Mr. Herschmann cut him off.

“I’m going to give you the best free legal advice you’re ever getting in your life,” he recalled telling Mr. Eastman before recommending he find a criminal defense lawyer, adding, “You’re going to need it.”

LBC: Putin's ex-spokesperson explains how he thinks war will end We use your sign-up to provide content in ways you’ve consented to and to improve our understanding of you. This may include adverts from us and 3rd parties based on our understanding. You can unsubscribe at any time. More info Sergei Markov, a former spokesman […]

Time to play hardball: Truss told to ‘expose EU games’ and cement place as next PM

Liz Truss' allies calling for bid to take over from Prime Minister We use your sign-up to provide content in ways you’ve consented to and to improve our understanding of you. This may include adverts from us and 3rd parties based on our understanding. You can unsubscribe at any time. More info But Jayne Adye […]

COP26: Boris Johnson speaks at Glasgow summit We use your sign-up to provide content in ways you’ve consented to and to improve our understanding of you. This may include adverts from us and 3rd parties based on our understanding. You can unsubscribe at any time. More info On day 2 of the COP26, a picture […]

L Brands CEO in talks to step aside and sell Victoria’s Secret: WSJ