The latest statistics published by the Scottish Qualifications Authority (SQA) show that National 5, Highers and Advanced Highers pass rates have fallen from last year, when grades were based on teacher assessment. But the Scottish Conservatives raged the most startling aspect relates to the differential in results between pupils from the most and least deprived parts of Scotland. The age gap in percentage points between the proportion of pupils passing has risen in Nat 5 (from 9.1 in 2021 to 14.6 this year), Higher (7.8 to 15.0) and Advanced Higher (5.5 to 13.2).

The gulf between pupils in SIMD Quintile 1 (most deprived) and Quintile 5 (least deprived) obtaining A grades at Higher is now a massive 23.2 percent – a gap bigger than in any of the previous four years.

The Scottish Tories said Ms Sturgeon had previously described eliminating the educational attainment gap between the most and least deprived kids as the “defining mission” of her SNP Government, but Shadow Education Secretary Oliver Mundell said the results revealed the First Minister’s “abject failure” there.

He raged: “While pupils and teachers have done their best, we can’t ignore the abject failure of the SNP Government, and their betrayal of kids from the most deprived parts of Scotland.

“The widening attainment gap is a badge of shame for the First Minister and a shocking indictment of the SNP’s dismal record on education. 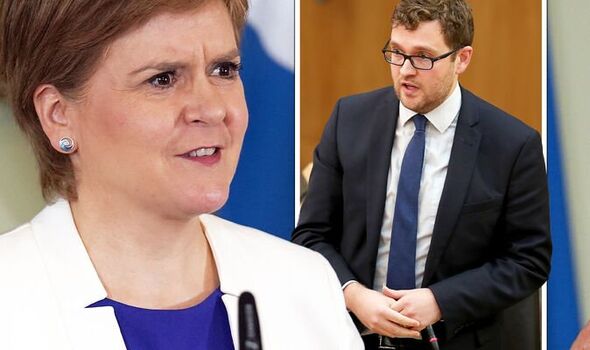 “Nicola Sturgeon described eliminating it as the ‘defining mission’ of her Government and yet this year the gap has widened to a chasm yet again.

“Most telling is the differential in A grade passes at Higher because these are crucial in determining which pupils gain access to the most sought-after university courses.

“It’s unforgivable that year after year, talented pupils from poorer parts of the country are being failed by the SNP. But it seems they are no longer serious about tackling this issue.”

Mr Mundell also praised Scotland’s students, teachers and parents, congratulating all the pupils who had achieved their desired grades.

He added: “I’d like to pay tribute to the hard work of pupils, teachers and parents after another school year impacted by Covid.

“It was welcome to see a return to a full exam diet after years of upheaval caused by the pandemic and I’d like to congratulate all those who have achieved the grades they hoped for and to acknowledge the hard graft that made that possible.”

Dawn Butler says Boris Johnson is a ‘serial liar’ We use your sign-up to provide content in ways you’ve consented to and to improve our understanding of you. This may include adverts from us and 3rd parties based on our understanding. You can unsubscribe at any time. More info The Labour MP was booted out […]

‘Get a grip of the s***show!’ Brexiteer Tory MPs call on Boris to give Lord Frost new role

GB News: Guest discusses Lord Frost and his resignation We use your sign-up to provide content in ways you’ve consented to and to improve our understanding of you. This may include adverts from us and 3rd parties based on our understanding. You can unsubscribe at any time. More info Lord David Frost, 56, has been […]

Boris Johnson tax cut plans: PM hints at future tax cuts but how will it impact YOU?

Boris Johnson: UK 'setting example' for green agenda We use your sign-up to provide content in ways you’ve consented to and to improve our understanding of you. This may include adverts from us and 3rd parties based on our understanding. You can unsubscribe at any time. More info Tax rises are expected in a bid […]