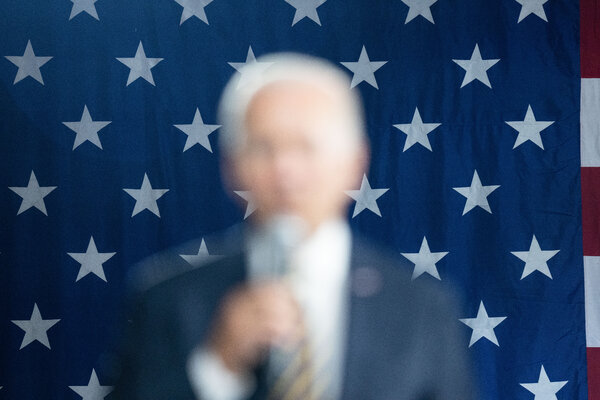 By Gail Collins and Bret Stephens

Ms. Collins and Mr. Stephens are opinion columnists. They converse every week.

Bret Stephens: You came around!

Gail: Joe came around! Or caved, which sounds a little more satisfying. Of course we’ve still got his Senate colleague Kyrsten Sinema and her tax obsessions to worry about. But if it all comes together this week, we’ll get the big Biden program to battle climate change. Will that make you as happy as it would make me, hmm?

Bret: Your happiness sounds like it’s an 8 or a 9 on a 10-point scale, and mine is probably around a 5. The Senate just passed a $280 billion bill to support the semiconductor industry under the guise of standing up to China, which is really just a huge giveaway to Intel and other U.S. chip makers. Now we’re dropping another $369 billion, and a lot of that will be in the form of corporate subsidies for companies like Tesla and General Motors. I know Manchin and Larry Summers are saying this will help bring down inflation. But pumping a lot of money into an economy usually has the opposite effect.

On the other hand, it’s a whole lot less than the trillions the administration wanted to spend last year, so I’ll take that as a victory. It might keep the nuclear industry alive, which is also vital if we are serious about tackling climate change, and it might also reduce some of the permitting bottlenecks that get in the way of energy infrastructure. And the two bills are solid legislative wins for President Biden, who really, really needed them.

Gail: As did all of us who are still Friends of Biden — although I guess we’d prefer not to be called F.O.B.s.

Bret: Shame the news arrives the same week we get the second straight quarter of negative economic growth, which is … not a recession?

Gail: I prefer to think of it as an, um, a very relaxed financial time.

Bret: Not sure how much it would help Biden if he were to say, “Folks, the economy isn’t stalling. It’s relaxing.” Sorry, go on.

Gail: And while of course politics is utterly beside the point — who in the world would worry about the entire makeup of Congress? — this legislation has got to help the Democrats come election time. Lots of good reasons we’re in an economic … slump. But you’ve got to be able to deliver a plan for making things better.

One of my favorite parts of the bill is the way it clamps down on pharmaceutical companies. Like giving the government power to negotiate on the prices of some drugs covered by Medicare.

Bret: Terrible! Price controls inevitably lead to less innovation, fewer incentives to manufacture generics and biosimilars, and crazy distortions as pharmaceutical companies jack up the price of some drugs to make up for lost revenue in others. It’s just as bad an idea as rent control and rent stabilization, which is great for some but distorts the overall market and makes the city more expensive.

Opinion | The Aftershocks From the Capitol Attack

To the Editor: Re “Pelosi Threatens Impeachment if Trump Doesn’t Resign ‘Immediately’” (nytimes.com, Jan. 8): Speaker Nancy Pelosi’s view that President Trump should be impeached if he does not resign immediately is understandable but impractical. Too little time remains until the blessed day when Joe Biden will be inaugurated. In any event, rushing through the […]

Here’s what you need to know about the week’s top stories. By Carole Landry and Judith Levitt (Want to get this briefing by email? Here’s the sign-up.) Here are the week’s top stories, and a look ahead 1. President Trump resumed holding big, public events a little more than a week after testing positive for […]

Sanders presidency could start with U.S. jobs program, then scale up