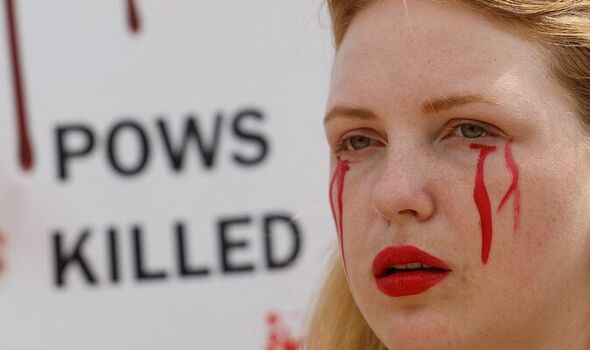 The Red Cross said it was urgently continuing to seek access to the devastated prison hit in a missile attack in order to help with evacuating and treating any surviving wounded. Currently, both Ukraine and Russia have accused each other of attacking the camp at the weekend.

But Ukraine also branded Russia a “terrorist state” after Moscow’s UK embassy went on to tweet after the attack that Ukrainian Azov battalion soldiers held in custody all deserved a “humiliating death” by hanging.

The Red Cross said it was asking for access to the Russian-run detention facility and to surviving prisoners – but no permission was immediately forthcoming.

Its deputy head of delegation in Ukraine, Daniel Bunnskog, said granting access to POWs was an obligation under the Geneva Conventions.

However, Russian defence officials later claimed Moscow would welcome an “objective investigation” into the incident.

What actually happened at the Olenivka prison camp – which now lies in ruins – remains unclear.

Unverified Russian video footage of the aftermath shows a tangle of wrecked bunk beds and badly charred bodies in the prison – controlled by the Russian-backed self-proclaimed Donetsk People’s Republic (DNR).

Russia had published a list of what it said were the 50 POWs killed in the strike.

But Moscow said the attack was carried out by Ukraine using a US-made HIMARS artillery system.

Kyiv in turn denied carrying out the strike and alleged that Russia fired on the facility to cover up evidence of war crimes.

The Red Cross and the UN said they were seeking access as both sides continued to trade blame for the attack.

Twitter acknowledged that the post from the Russian embassy violated the social media company’s “rules about hateful conduct” – but added that it might be in the public interest to keep it accessible.

The tweet sent out shortly after the missile attack said that Azov “militants deserve execution, but death not by firing squad but by hanging, because they’re not real soldiers. They deserve a humiliating death”.

The tweet included a video clip showing a couple in a wrecked building, accusing Azov troops of having shelled their home. The embassy’s call for execution repeated what a man in the accompanying video on social media said.

Azov troops were forced to lay down weapons in May after bravely defending for weeks Azovstal, a giant steelworks in the south-eastern port of Mariupol that was eventually captured by Russia.

The Azov Regiment is a nationalist group with far-right links when it was set up in 2014. It was later incorporated into Ukraine’s National Guard.

Russia has long accused the regiment of being neo-Nazis and war criminals, as part of the Kremlin’s propaganda campaign to justify its invasion of Ukraine.

By Herbert Lash NEW YORK (Reuters) – Shared-office operator WeWork told investors on Thursday the $4.4 billion in cash and cash commitments it had at year-end 2019 is enough to execute its five-year plan and manage the challenges posed by the coronavirus crisis. WeWork, whose losses more than doubled to $1.25 billion as of the […]

By Kane Wu and Julie Zhu HONG KONG (Reuters) – The logistics unit of Chinese e-commerce company JD.com Inc <JD.O> has held early discussions with banks about a potential overseas IPO that could raise $8 billion to $10 billion, two people with direct knowledge of the matter told Reuters. JD Logistics is targeting a valuation […]

Facebook removed a post by U.S. President Donald Trump on Tuesday after he falsely claimed coronavirus can be less deadly than the seasonal flu. According to CNN, a Facebook spokesperson confirmed the company removed the post for breaking its rules on Covid-19 misinformation. His post was also flagged by Twitter for “misleading and potentially harmful […]