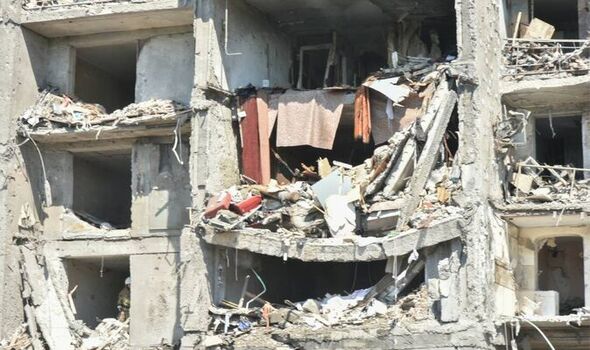 The number of strikes has more than doubled in the past two weeks, a Ukrainian military commander says – with less precise, Soviet-era weapons used for more than half of the attacks.

One section of a nine-storey apartment block was completely destroyed by a missile that struck at 1am.

The walls and windows of a neighbouring 14-storey apartment block were also damaged by the blast wave, before residents joined in rescue workers’ efforts to comb the rubble for survivors.

Oleksandr Abramov, who lives nearby and rushed to the scene, said: “We came here to the site, assessed the situation together with emergency workers and locals, and together helped those who survived.

“And those who unfortunately died, we helped to carry them away.”

At least 16 people were killed at the apartment block in Serhiivka village near Odesa, and another three, including one child, in strikes which hit nearby holiday resorts.

The Kremlin denied targeting civilians, with spokesman Dmitry Peskov telling reporters: “I would like to remind you of the president’s words that the Russian Armed Forces do not work with civilian targets.”

But thousands of civilians have perished since the invasion began on February 24, when Russia claimed it was embarking on a “special operation” to root out nationalists.

On Thursday, Russia pulled its troops off Snake Island, a strategically important outcrop it seized on the war’s first day in order to control the northwestern Black Sea and blockade Odesa, along with other ports.

The Odesa blast, from long-range missiles, comes after Russia was accused of escalating such attacks deep in Ukraine, far from front lines – including one devastating strike that killed at least 19 people in a crowded shopping mall in Kremenchuk.

Until that attack on Monday, the central city had escaped the worst of the fighting.

Samuel Cranny-Evans, a research analyst with the Royal United Services Institute, suggested the targeting of civilians was a deliberate move.

He said: “The Russians have demonstrated the ability to be incredibly accurate with their long-range missiles.

“When something dreadful happens, like a strike on a train station filled with refugees, this suggests it was either a deliberate attempt to undermine the will of Ukrainian citizens to resist, or a terrible accident.

“The former fits within Russian doctrine and military thought, which makes it reasonable to consider these attacks as deliberate.”

Ukrainian Brigadier General Oleksii Hromov warned on Thursday that 68 civilian sites had been attacked with 202 missiles in the second half of June – up by 120 on the first half of the month.

He said civilian hubs are “suffering significant losses due to poorly targeted strikes”.

Canada: Protesters attend Justin Trudeau rally in Bolton We use your sign-up to provide content in ways you’ve consented to and to improve our understanding of you. This may include adverts from us and 3rd parties based on our understanding. You can unsubscribe at any time. More info In April 2017, former UK Prime Minister […]

UK weather: Met Office predict ‘sunny spells’ and ‘showers’ We use your sign-up to provide content in ways you’ve consented to and to improve our understanding of you. This may include adverts from us and 3rd parties based on our understanding. You can unsubscribe at any time. More info On Wednesday April 13, just before […]

By John Revill ZURICH (Reuters) – The Swiss National Bank remains active in the currency markets to check the appreciation of the safe-haven Swiss franc, albeit less than in previous weeks as coronavirus fears give way to broader market optimism, data on Monday indicated. Total sight deposits, which include other deposits on sight in Swiss […]