The Daily Express revealed that one of the court’s own judges believes the veil of secrecy should be lifted over the decision. 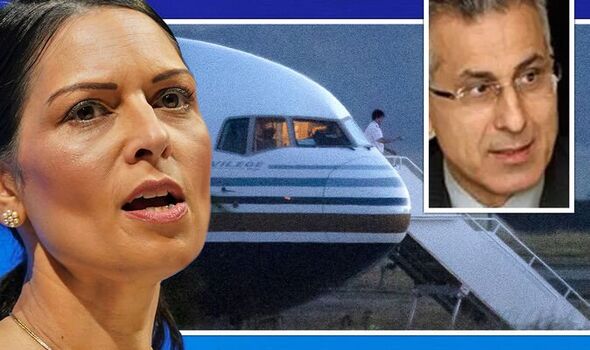 Judge Latif Hüseynov said the name should be published “for transparency”.

When the Daily Express told Mr Hüseynov about how even the UK Government – one of the parties involved in the case – did not know the judge’s identity, he reacted: “Oh wow”.

The Azerbaijani judge said: “They have to, for transparency.”

The ECHR has repeatedly refused to identify the human rights justice whose last-minute ruling prevented last week’s flight taking off from the Wiltshire MoD base of Boscombe Down to the East African country’s capital Kigali.

Only two judges were allowed to make the decision – either Liechtenstein’s Carlo Ranzoni or Hungary’s Peter Paczolay.

A Home Office source told the Daily Express: “When the ECHR’s own judges are condemning the secrecy around who grounded the Rwanda flight, something has gone badly wrong.

“It’s time for these foreign judges to end this cover up, own up and publicly explain the rationale and reasoning for stopping the flight despite the unanimous verdict of the UK courts.”

The Government intends to continue with its plan to deport some migrants who arrive in Britain on small boats, to have their asylum claims processed in Rwanda. Home Secretary Priti Patel claims the strategy will stop human traffickers targeting the UK.

The ECHR decision on appeals by migrants already on board meant the flight did not take off. The UK is part of the European Convention on Human Rights. But many critics warn that it has too much influence over UK court decisions.

Tory MP Alec Shelbrooke told the Daily Express: “The big problem here in Britain is the invidious position Tony Blair put this country in by incorporating it into our laws.

“A lot of countries just take advice from the ECHR.

“That is why I am absolutely behind the British Bill of Rights. The ECHR is a well respected court and the British have some leadership positions there.

“But it should be something that feeds into our courts and we need to disentangle it from our laws. That is the important thing. There can be no place in law or judgments for secrecy.

“What will undermine any institution is the idea that it is shrouded in secrecy. There are no excuses for not revealing who is behind the judgments.”

It comes as the Daily Express can also reveal that the ECHR considers applications concerning “the right to a fair trial” a “more exceptional” use of interim measures.

Lawyers for the applicants told the High Court that the main reason they should not be deported to Rwanda is because they would not be given a fair trial.

Court documents reveal: “The most typical cases are those where, if the expulsion or extradition takes place, the applicants would fear for their lives (thus engaging Article 2 (right to life) of the European Convention on Human Rights) or would face ill-treatment prohibited by Article 3 (prohibition of torture or inhuman or degrading treatment) of the Convention.

The ECHR said in its press release announcing the decision: “The court had regard to the concerns identified in the material before it, in particular by the UN High Commissioner for Refugees (UNHCR) that asylum seekers transferred from the United Kingdom to Rwanda will not have access to fair and efficient procedures for the determination of refugee status.”

‘We can argue about GDP but what about home budgets!’ Trevor Phillips erupts at Zahawi

Nadhim Zahawi grilled on cost of living by Trevor Phillips We use your sign-up to provide content in ways you’ve consented to and to improve our understanding of you. This may include adverts from us and 3rd parties based on our understanding. You can unsubscribe at any time. More info The Sky News anchor attempted […]

‘Started at a disadvantage’ Boris Johnson defended over Brexit stalemate

MP defends Boris Johnson as she slams Theresa May We use your sign-up to provide content in ways you’ve consented to and to improve our understanding of you. This may include adverts from us and 3rd parties based on our understanding. You can unsubscribe at any time. More info Theresa Villiers has rallied around the […]

This is another News Portal > World News > Volkswagen’s Skoda Auto 2019 deliveries dip to 1.24 million cars due to weaker sales in China