The California utility settled civil charges and avoided criminal prosecution over the role of its equipment in igniting the blazes. 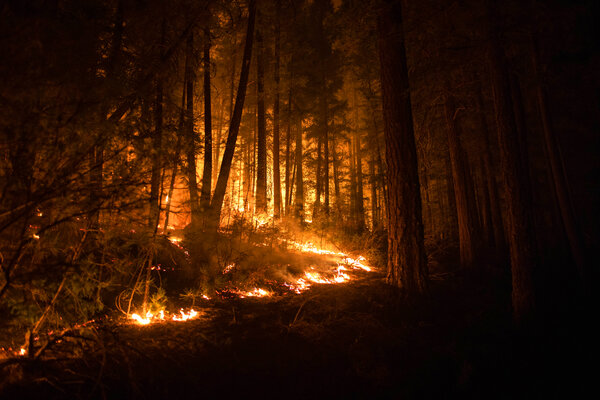 The agreement allows PG&E to avoid criminal prosecution for causing last year’s Dixie fire — the second-largest blaze in California history — and the Kincade fire in 2019. The settlement includes tens of millions of dollars in payments to local organizations, schools and government agencies, and it will fund an independent safety monitor for the life of the five-year civil judgment.

Prosecutors said they had pursued a civil action against PG&E to gain more benefits for victims than criminal prosecution would have allowed. The maximum criminal fines in the Dixie fire — which burned 963,000 acres and destroyed more than 1,300 buildings across Butte, Plumas, Lassen, Shasta and Tehama counties — were $329,417.

“This settlement avoids both a bankruptcy and inordinate delay for the Dixie fire homeowners and renters — particularly those without insurance,” Michael L. Ramsey, the district attorney for Butte County, said in a statement.

Investigators determined that a tree came into contact with PG&E’s power lines near the Cresta Dam, about 100 miles north of Sacramento, sparking the fire.

“Although criminal charges are dismissed, the level of punishment and oversight provided by this judgment is greater than could be achieved against a corporation in criminal court,” said Jill Ravitch, the district attorney for Sonoma County, the site of the Kincade fire.

Ms. Ravitch said the decision to reach a settlement also resulted from a failure by state lawmakers to pass laws to increase penalties for corporations found in violation of the law. She added that the state attorney general, Rob Bonta, declined to bring any legal action against PG&E.

Mr. Bonta did not immediately respond to a request for comment.

PG&E said it was working to increase its accountability and transparency to the public, which the settlement would continue to help improve.

“We are committed to doing our part, and we look forward to a long partnership with these communities to make it right and make it safe,” said Patricia K. Poppe, the chief executive of PG&E Corporation.

The settlement did not include the Zogg fire, which killed four people, burned more than 56,000 acres and destroyed 204 buildings in Shasta County in fall 2020. In that case, PG&E faces felonies and misdemeanor charges, including manslaughter.

Federal and state prosecutors previously won convictions and guilty pleas against PG&E related to gas pipeline explosions and wildfires. PG&E’s felonies include 84 counts of involuntary manslaughter that resulted from the Camp fire, which destroyed the town of Paradise in 2018.

The Camp fire and several other wildfires dating to 2015 led PG&E to seek bankruptcy protection after the company amassed $30 billion in wildfire liability. The utility emerged from bankruptcy in July 2020.

The utility has proposed spending billions of dollars for underground transmission lines to help prevent its equipment from causing fires.

Canada's banks to cement status as solid investments in a crisis

(Reuters) – Canadian banks, whose dividends yields climbed during the financial crisis, are again gaining favor with investors, as their pledges to maintain payouts gives them an edge over global counterparts who have shunned them. Canadian banks are currently offering dividend yields of 5.7% versus U.S. banks’ 4.2% and European lenders’ 1.7%, according to Datastream. […]

More than a year on, China’s suspensions of seafood exports from two New Zealand processing sites remain unresolved, and an exporter in another primary sector has had a halt imposed on them. The Ministry for Primary Industries, responding to Herald inquiries, said exports from two Sanford and Sealord plants remained suspended as discussions continued with […]

Most colleges and universities now use a “merit” aid strategy to solicit teenagers. Your eighth grader probably ought to know how it works. Credit…Robert Neubecker Supported by By Ron Lieber This article is adapted from “The Price You Pay for College: An Entirely New Road Map for the Biggest Financial Decision Your Family Will Ever […]

‘They Thought I Was Dead’: Haitian President’s Widow Recounts Assassination