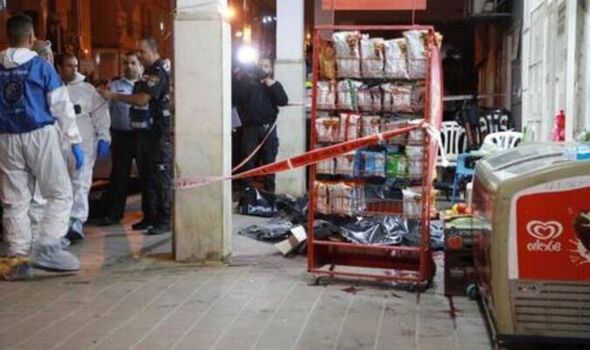 Three members of the Palestinian militant group Islamic Jihad were killed in a shootout with police last night, and more than 30 suspects have been arrested, in connection to three seemingly unrelated terror attacks across the country which left 11 dead.

But the country remains a powder keg, with an unprecedentedly heavy police and army presence on the streets, as it braced for more in April, the holy month of Ramadan.

Government sources in Israel said the attacks were inspired by a sustained social media campaign on TikTok and Telegram that was organised by Iran-funded Hamas. TikTok’s Chinese owners have ignored Israeli requests to remove terror-related content from the social media site.

The first attack was carried out by an Israeli Arab who had planned to join the Islamic State group in Syria and had already served a jail sentence for security crimes. He drove his car into a cyclist, killing him, then stabbed three people to death outside a shopping centre in the southern city of Beersheba.

In the third, on Tuesday evening, five people were shot dead by a Palestinian gunman in Bnei Brak, a suburb of Tel Aviv. Chilling video showed how the terrorist, having already shot two Ukrainian men sitting outside a grocery store, calmly opened fire on a passing motorist, killing him, before  shooting a fourth passer by.

Confronted by two armed police officers, he was able to kill one before being shot and killed.

It was later revealed that he used an agricultural crossing near the Judea and Samaria security barrier to enter Israel.

The attacks were timed to coincide with a landmark regional summit in Israel’s Negev desert, where top diplomats from the United Arab Emirates, Bahrain, Morocco, Egypt, Israel and the United States were meeting to discuss security issues.

Just two weeks earlier, Tehran publicly vowed to avenge the killing of two soldiers serving with its elite Iranian Republican Guard Corps in Syria, for which they blamed Israel.

While the attackers were not linked, government sources in Israel said they had been inspired to act by a sustained social media campaign.

“Two weeks ago it became clear that Hamas wanted to set fire to the West Bank during Ramadan. This is perfect motivation for sleepers who have been radicalised,” said a security source.

“We are now facing a significant security challenge – a perfect storm which stoked tensions through social media and the holiday season. Any attack can lead to the next.

“Unlike during previous times, a large amount of weapons is now already on the ground. This means people have the capability of acting completely alone. All they need is inspiration.

“This is where social media, with extreme images and violent messages, has played and continues to play such an important role.”

And, despite its intentionally-lauded cyber capabilities, Israel does not yet possess a special unit devoted to monitoring social media postings and their likely consequences.

A soon-to-be published report will lay blame for the social media campaign on an Iranian cyber group, controlled directly by the IRGC, which operates across the spectrum of Iranian proxy power in Gaza, Lebanon, Yemen and Iraq.

It has also trained the Syrian Ba’ath Party and Yemen’s Houthis to conduct similar social media campaigns, with in person and via Zoom.

“It is significant that these attacks happened during the Negev summit,“ added the source.

“Iran wants to push the whole region into a cycle of violence. The consequences could be severe for the entire region.”

Last night a spokesman for Israel’s embassy in London said: “The best response to these attacks is the Negev Summit, with six foreign ministers from Israel, US, Egypt, UAE, Bahrain and Morocco promoting peace and condemning violence.

“This is precisely the response needed to all those who wish to eradicate our way of life.”

What is going on, Leo? Chaos in Ireland as lame-duck Varadkar faces legal hell

We will use your email address only for sending you newsletters. Please see our Privacy Notice for details of your data protection rights. Taoiseach Mr Varadkar is currently the country’s leader in a caretaker capacity after his Fine Gael party’s disappointing showing in February’s general election. However, with talks aimed at forming a new coalition […]

BANGKOK (Reuters) – Thailand’s economy is expected to lose 1.3 trillion baht (nearly $40 billion), almost all of it in the tourist sector, due to the initial impact of the coronavirus pandemic, a banking association said on Tuesday. “But if the outbreak cannot be controlled within the current quarter, the impact will be bigger,” Predee Daochai, […]

STOCKHOLM (Reuters) – Sweden’s H&M <HMb.ST> said on Thursday it was in talks with tens of thousands of its staff about shortening working hours with the firm among many retailers hit by the coronavirus pandemic and fewer customers in many markets. “The spread of COVID-19 has caused an exceptional situation and the H&M group is […]

Fed vows to maintain bond-buying until 'substantial progress' in recovery

When will the train strikes end?