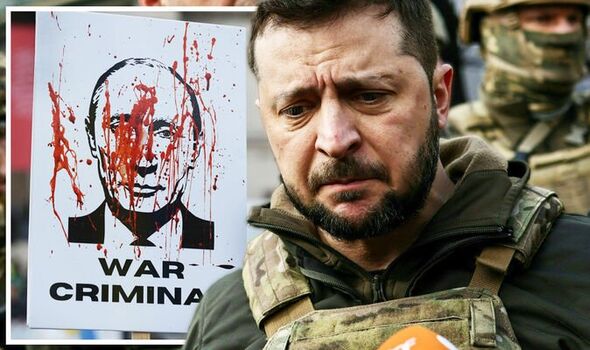 The horrific claim was made by the Ukrainian ambassador to Estonia Mariana Betsa in a heartbreaking tweet with pictures too graphic to show. With Russian troops pulling out of central Ukraine and the surrounding Kyiv area, shocking images have emerged of dead bodies and mass graves, with many calling for Vladimir Putin to be placed on trial for war crimes.

“They burned the bodies.

“A 3-year old Arina (with signs of rape) on top of her 17-years old sister Veronica.

“Russia should be accountable for the genocide of Ukrainians.”

The tweet was backed up with further evidence of shocking war crimes by Ukrainian MP Lesia Vasylenko who wrote: “Russian soldiers loot, rape and kill.

“Russia. Russian Men did this.

“And Russian mothers raised them.

“A nation of immoral criminals.”

The shocking images sparked a volley of replies from those witnessing the truly disturbing scenes.

One Twitter user, Corkmom said: “My heart is broken, I can’t stop crying, what can we do?”

Jonqui added: “Signs of rape of a 3-year-old – heartbreakingly horrendous beyond belief.

“I will never understand how rape is weapon of war.

“What makes soldiers turn into rapists in war conditions or are we to believe they are rapists in normal life?

Former boxing heavyweight champion Wladimir Klitschko wrote: “There are no words for these crimes.

“But there are those responsible for these crimes.”

US President Joe Biden has called for Vladimir Putin to be tried for war crimes as western leaders prepared a fresh round of economic sanctions against Moscow amid mounting global outrage over claims of civilian killings by Russian soldiers in Ukraine.

Mr Biden responded to harrowing images broadcast around the world after the discovery over the weekend of a mass grave and bodies in civilian clothes, some with their hands bound.

Speaking to reporters, the President said: “You may remember I got criticised for calling Putin a war criminal.

“Well, the truth of the matter – we saw it happen in Bucha – he is a war criminal.

“But we have to gather the information.

“This guy is brutal and what’s happening in Bucha is outrageous.”

With the situation in Ukraine getting worse, should the West now intervene? Should Vladimir Putin be put on trial for war crimes? What can be done to stop the horror? Let us know in the comments section below by CLICKING HERE to join the debate – Every Voice Matters!

Speaking of his own sorrow over the gruesome discovery in Bucha, Ukrainian President Volodymyr Zelensky said: “You stand here today and see what happened.

“We know thousands of people have been killed and tortured with extremities cut off; women raped, children killed.”

French president, Emmanuel Macron, called for “very clear measures” against Moscow, including an embargo on Russian oil and coal, while the EU’s foreign policy chief, Josep Borrell, said the bloc was urgently working on a new round of sanctions and stood in solidarity with Ukraine during “sombre hours for the whole world”.

Taliban planning to ‘troll’ US with inauguration of government on 9/11, say Russian media

Taliban spokesman says ‘we were not ready’ for new government We use your sign-up to provide content in ways you’ve consented to and to improve our understanding of you. This may include adverts from us and 3rd parties based on our understanding. You can unsubscribe at any time. More info The move would be seen […]

By Daniel Leussink TOKYO (Reuters) – The number of foreign visitors to Japan fell for the fourth month in January as the impact of a South Korean boycott weighed, with further, sharper falls expected as the coronavirus outbreak keeps away Chinese travellers. The fall in number comes months before Japan is set to host the […]

Pope warned that Russia mission 'doomed to fail' We use your sign-up to provide content in ways you’ve consented to and to improve our understanding of you. This may include adverts from us and 3rd parties based on our understanding. You can unsubscribe at any time. More info The apology addressed the church-run residential schools […]

Covid 19 coronavirus: Australia bans flights to and from India until May 15