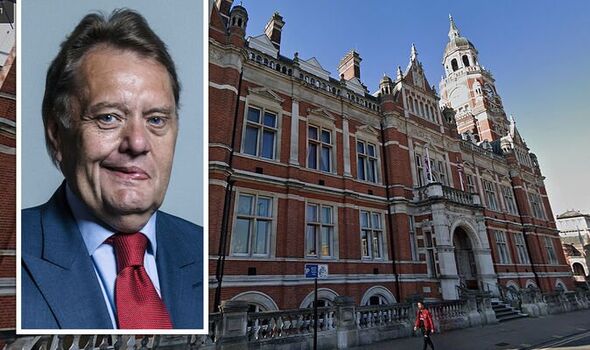 Research showed the number of officials who received more than £100,000 increased during the first year of the pandemic by 119, taking the total to 2,921.

The outgoing boss of a failing London council was given a £613,895 package despite the authority being effectively declared bankrupt soon after.

Almost all council tax bills have risen across the UK this year despite the soaring cost of living pressures families are facing.

John O’Connell, chief executive of the TaxPayers’ Alliance, which draws up the annual town hall rich list, said the research would allow residents to hold local councils to account.

He said: “Taxpayers facing a cost of living crisis want to know they are getting value for money from their local authority leadership.

“With households having suffered through the pandemic and now struggling under colossal tax bills, the country needs councils to prioritise key services without resorting to punishing tax hikes.

“These figures will allow residents to judge town hall bosses for themselves and hold their local councils to account.”

Average band D taxpayers in England face a council tax rise of 3.5 per cent this year – a £68 hike.

Wales will see an average increase of 2.7 per cent and all Scottish local authorities – apart from Shetland – are pushing up bills.

The TPA research looks at the salary, benefits, bonuses, pensions and exit payments to calculate the annual rich list of how much top employees cost the taxpayer.

It found around eight employees per council on average received more than £100,000 in pay and perks with around two raking in upwards of £150,000.

It named Jo Negrini, former chief executive of Croydon council, as having the highest remuneration of any council employee in the country at £613,895.

West Sussex was next at £249,423 for its interim director of human resources, followed by Cheshire East, which paid £237,500 for an undisclosed role.

Conservative MP Sir John Hayes raised concerns about so many local officials being paid more than the Prime Minister when they are unaccountable to taxpayers.

He said: “Many of these senior local bureaucrats are earning far more than the Prime Minister, thousands are earning more than Members of Parliament.

“People whose responsibility is not for the whole country but for a locality and are being paid an awful lot of taxpayers’ money.

“Maybe we should use the Prime Minister’s salary as a measure of what’s appropriate for non-elected people.”

He said: “I have always been slightly flabbergasted at some of the salaries paid out at local authorities.

“I’m also forever surprised at how often these vast sums of money they receive are not always linked to performance, by which I mean delivering for the taxpayers.

“It is something that needs to be looked at.

“There’s a culture of various individuals in local authorities getting pay increases which aren’t necessarily linked to what we would deem good performance and I think that needs to change.

“In areas such as Croydon, I think council ratepayers will really resent hearing this.”

Westminster council had the greatest number of employees who topped £100,000 at 44, nine more than the previous year.

In the East Midlands, Lincolnshire council had the most employees wracking in more than £100,000 for the second year running at 15.

Essex topped the tally In the East of England at 37 while Kent and Hampshire in the South East both recorded 26.

Cornwall had the most in the South West at 27 while Birmingham in the West Midlands had 21.

Leeds had the highest in Yorkshire and the Humber with 26 officials receiving more than £100,000, up eight on the year before.

In the North East, it was Northumberland with 20, up seven in 12 months, while Manchester had the highest number in the North West at 24.

London councils accounted for most of the top ten overall, with only Essex and Edinburgh also included.

In Scotland, Edinburgh had the highest number of staff receiving more than £100,000 at 29 but the biggest remuneration package was received by Glasgow’s executive director of city building at £612,412.

Cardiff had 14 employees who received a six figure sum while in Northern Ireland three local local authorities had six employees each, including Belfast.

Croydon council said it could not comment on the payments made to its former chief executive due to pre-local election restrictions but stressed the pension strain payment – a payment made to employees whose regular pension payments do not account for the whole of their entitlement – was not paid as a lump sum.

The annual rich list is in its 15th year and the analysis is based on the annual accounts produced by councils.

The TPA says it includes total remuneration rather than just salaries as it gives a fuller picture of the total cost to the taxpayer of a council executive.

Its research shows council tax bills have gone up by nearly 250 per cent since the annual bill was introduced in 1993 and says authorities needed executives who can focus on key services and keep bills down at the time of a cost of living crisis.

POLL: After Starmer sent warning, should Labour APOLOGISE to Brexiteers for Brexit stance?

We will use your email address only for sending you newsletters. Please see our Privacy Notice for details of your data protection rights. Three former members of Jeremy Corbyn’s Shadow Cabinet have called on Sir Keir to apologise for the party’s previous position on Brexit in a bid to rebuild trust from so-called “red wall” […]

In a sign of mounting concerns about John Hickenlooper’s standing in the Colorado Democratic Senate primary, a new political group is spending at least $1 million on a scathing attack ad against Hickenlooper’s rival in the race. The ad slams former Colorado House Speaker Andrew Romanoff for spearheading a package of tough bills opposing illegal […]

POLL: Should Starmer and Rayner quit as leaders of Labour party?

Keir Starmer announces he will step down if fined by police We use your sign-up to provide content in ways you’ve consented to and to improve our understanding of you. This may include adverts from us and 3rd parties based on our understanding. You can unsubscribe at any time. More info Sir Keir has promised […]