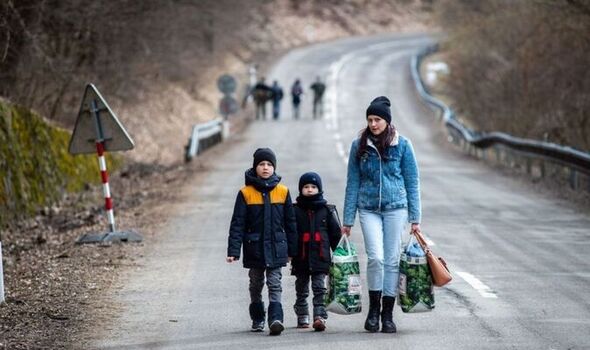 I joined those fleeing Kyiv yesterday to avoid the horrors of the Russian invasion. They went by car, train, bus, bike and even on foot.

For security reasons we had been ordered to leave the city as Russian tanks rolled in perilously close to our hotel.

On one of the country’s busiest motorways we passed a squadron of Ukrainian tanks hiding in the verges. To see them standing ready to repel the enemy’s advance so close to a motorway service station was particularly chilling.

It took us five hours, 38 minutes just to get out of the city.

Minibuses, motorbikes and giant trucks politely competed for space. But everyone knew the enormity of the situation.

Former factory worker Vasiliy, 64, had driven to the capital to pick up his son, daughter-in-law and grandchild.

Carrying a pushchair and single suitcase for the family, he said: “I’m glad we were able to get out and leave.”

As cars edged past us, they were all packed, many with four or five people squeezed into the back seat.

All were sombre. No one was laughing. But despite that there was a real spirit of camaraderie.We passed the same cars on the three-lane carriageway so often that we ended up on nodding terms.

Several people gave us a thumbs-up and reassuring wave when they realised we were journalists. Many cars had children and grannies and several had pet cats and dogs.

The Polish border may be more than 500 miles away from Kyiv but they wanted to make a start.

The blue and yellow Ukraine flag fluttered on a huge advertising screen. Underneath a group of youngsters walked with their cases.

At times the line of people stretched as far as the eye could see. Some stopped in laybys to play with their children.

Ten miles out of the city a group stood at the roadside trying to hitch a lift.Then within a mile there were dozens and dozens more.

I’ve never seen so many hitchhikers on a single stretch of road.

On the other side of the carriageway several convoys of Ukrainian troops were racing back down into Kyiv ready for the fight ahead.As they drove past they received huge cheers.

Before we reached the countryside, there was a massive military presence.

Along the side of the road camouflaged soldiers huddled under netting, surrounded by green sandbags, waiting for any Russian troops.

Outside the Beresteiska metro station a squad of heavily armed soldiers stood on guard.

One smoked a cigarette and yawned as he spoke to an elderly woman.

In the city there were queues at every cashpoint we passed. But they were nothing compared to the lines of cars at the petrol stations.

They were huge and some drivers were forced to resort to pushing their vehicles to the pumps to make use of every last bit of fuel.

And there were chaotic scenes at the main railway station as people clamoured to get on the last trains out.

Mums, dads and children pushed to get on – and most trains were crammed.

Very few people wanted to stay. Those who did wanted to fight.

The rest fled, wondering if they would ever be able to return to their homes.

The journey to Lviv took 14 hours but it was a route for safety for so many.

By James Oliphant WASHINGTON (Reuters) – Six Democratic U.S. presidential candidates sparred over war and trade, gender and health care, in a pressure-packed debate in Des Moines, Iowa, on Tuesday, with the first nominating contest in the state less than three weeks away. Here is how each of them fared: JOE BIDEN The former vice […]

By Khalid Abdelaziz KHARTOUM (Reuters) – Sudan’s transitional government is to postpone lifting fuel subsidies, initially planned as part of the 2020 budget, the information minister said on Saturday. Finance minister Ibrahim Elbadawi had said on Friday the fuel subsidies will be gradually removed. But the government met on Saturday with the former opposition which […]

The Daily Star’s FREE newsletter is spectacular! Sign up today for the best stories straight to your inbox Government scientists are calling for a 14-day national lockdown next month to avoid "breaking the NHS ". The NHS test-and-trace system is said to be "creaking at the seams" as the country's R rate pushes past 1.7. […]

UK praised for unlocking the ‘shortest route to peace’ in Ukraine

This is another News Portal > Politics > Brexit LIVE: ‘Out of their minds’ Bitter Remainer plot to weaponise ‘false story’ exposed