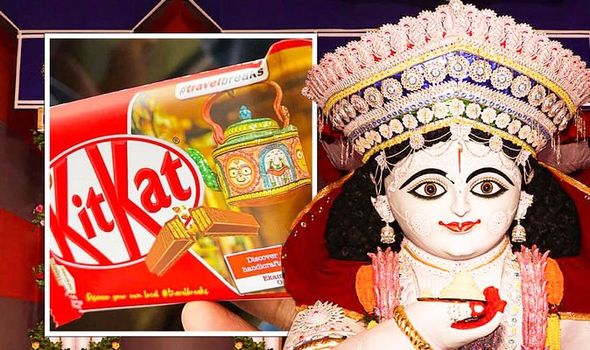 The bars, covered with the images of Hindu gods, Lord Jagannath, Balabhadra, and Mata Subhadra, were launched as part of the global ‘KitKat travel breaks’ range, but quickly stirred up a huge reaction on social media over fears the wrappers would be thrown away and end up on the streets, which would be disrespectful to the gods of the Hindy faith.

One Twitter user said: “It’s a huge humiliation to our Hindu religious cause after eating people will through this cover in the dustbin, road and some will walk and spit on it unknowingly.”

Another said: “Nestle India management gets it wrong again”.

Swiss food and drink company Nestle claimed the bars were created to “celebrate the culture” but has since apologised and withdrawn the packaging.

In a statement, a spokesperson said: “We do understand the sensitivity of the matter and regret if we have inadvertently hurt anyone’s sentiment.

“We had already withdrawn these packs from the market last year. We thank you for your understanding and support.

“We wanted to encourage people to know about the art and its artisans. We do understand the sensitivity of the matter and regret if we have inadvertently hurt people’s sentiments.’

They also issued another statement saying: “KitKat travel break packs are meant to celebrate beautiful local destinations and last year we wanted to celebrate the culture of Odisha with designs on packs representing Pattachitra, an art form uniquely identifiable by its vivid imagery.

“We wanted to encourage people to know about the art and its artisans.

“We do understand the sensitivity of the matter and regret if we have inadvertently hurt people’s sentiments.”

Some agreed with the brand saying, with one Twitter user saying it’s a “good concept” but echoing the concerns of others when the “wrappers end up on roads and drainages” which would “hurt people’s sentiments”.

Another said: “It is an honour to see our Odisha culture and Lord Jagannath, Balabhadra and Subhadra on KitKat but plz think once when someone will eat and will throw the wrapper into dustbins, drains, gutters and many will walk on it Jagannath family will be happy with it.”

Images like the ones used on the KitKat wrappers are part of the Pattachitra tradition, based in the eastern Indian states of Odisha and West Bengal.
It involves cloth-based scroll painting best known for its intricate details and mythological narratives and folktales.

This is not the first time the range has landed Nestle in trouble.

Last year they were forced to apologise for packaging which incorrectly portrayed Lamjao National Park to be in the state of Meghalaya rather than Manipur.

It also featured a picture of a red panda, which cannot be found in the park.

Brits have been urged to get tested for coronavirus if they get a hive-type rash as it could be a 'key sign' of the Omicron variant. According to the latest data from the UK Health Security Agency (UKHSA), one in 20 people in England currently has Omicron, The Mirror reports. So with Covid cases are […]

By Rozanna Latiff KUALA LUMPUR (Reuters) – Malaysia will extend a two-week restriction of movement order and unveil a second economic stimulus package as the number of coronavirus cases continue to climb, Prime Minister Muhyiddin Yassin said on Wednesday. The measures come as Malaysia reported 172 new coronavirus cases, taking the total to 1,796, the […]

Fire breaks out in Boulder just south of NCAR fire, but is quickly contained

A fire sparked in Boulder on Wednesday afternoon just south of the area burned by last month’s NCAR fire burn, but it was quickly contained by firefighters. Less than an hour after alerting the public to the wildfire, Boulder Fire Rescue said that the “active fire has been put out.” Firefighters remain on scene to […]