Novak Djokovic has landed in the Serbian capital of Belgrade following his deportation from Australia over his lack of a COVID-19 vaccination.

The world tennis number one arrived on a flight from Dubai a little after 12pm local time after being forced to leave the country as the Australian Open was getting under way in Melbourne.

A small crowd, some carrying Serbian flags, waited for him outside the terminal at Nikola Tesla Airport, along with journalists. 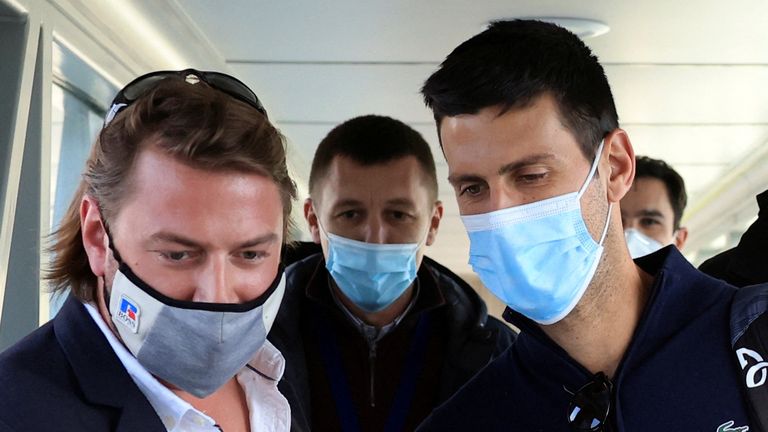 His departure came after three judges in Australia upheld the government’s cancellation of the Serb’s visa and his deportation.

The court ruling capped a two-week drama over his decision not to be vaccinated against coronavirus.

The judges upheld the visa cancellation on public interest grounds – meaning he could not defend his Australian Open title – a tournament he has won nine times.

Djokovic was hoping to set a new record of 21 Grand Slam singles titles, moving ahead of Roger Federer and Rafael Nadal, who also have 20 career slams.

Novak Djokovic visa saga: How it all went wrong for the tennis superstar

In a statement following the court’s decision, Djokovic said he was “extremely disappointed with the ruling” and he would be “taking some time to rest and to recuperate”.

He added: “I am uncomfortable that the focus of the past weeks has been on me and I hope that we can all now focus on the game and tournament I love.” 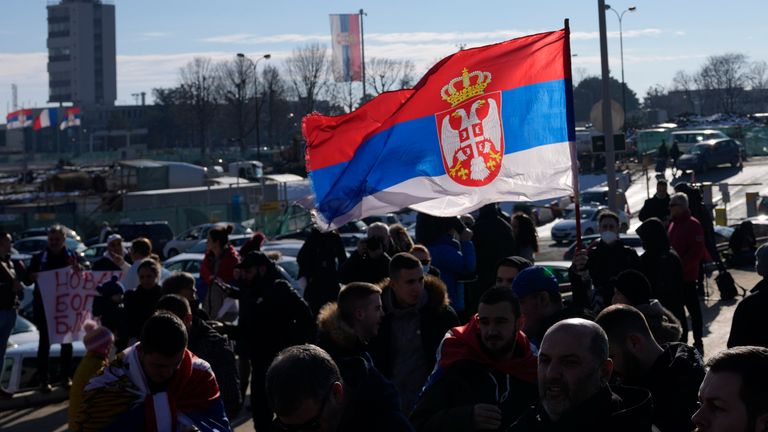 The full reasons behind the unanimous ruling will be published in the “coming days”, with Djokovic also ordered to pay the government’s court costs.

His visa was revoked for a second time on Friday after immigration minister Alex Hawke said the Serbian’s presence in Australia posed a public health risk.

The minister argued that Djokovic risked whipping up anti-vaccination sentiment and causing civil unrest during Australia’s worst outbreak of COVID since the pandemic began.

Following Sunday’s hearing, Mr Hawke said he welcomed the ruling to uphold his decision to cancel Djokovic’s visa “in the public interest”. “Australians have made great sacrifices to get to this point and the Morrison government is firmly committed to protecting this position, as the Australian people expect,” he added.

Djokovic had argued in an Australian court he should be allowed to stay and compete because a recent coronavirus infection meant he was exempt from strict vaccination rules.

But even as he arrived home, doubts were raised over whether Djokovic would be able to play in the next scheduled Grand Slam, the French Open, starting in late May.

A new law banning unvaccinated people from sports venues, restaurants and other public places, will apply to the tournament in Paris, according to Christophe Castaner, a member of the country’s parliament.

France’s sports ministry said on Monday there will be no exceptions to the new restrictions.

More than 95% of all Top 100 men and women tennis players in their tours’ respective rankings are vaccinated.

We will use your email address only for sending you newsletters. Please see our Privacy Notice for details of your data protection rights. All land, internal waters, territorial seas and Exclusive Economic Zones in the Arctic are under the jurisdiction of the eight Arctic coastal states of Canada, Denmark, Norway, Iceland, Sweden, Finland and Russia. […]

BEIJING (Reuters) – Tesla Inc sold 10,160 vehicles in China in March, its highest ever monthly sales in the world’s largest auto market, the China Passenger Car Association (CPCA) said on Thursday. Tesla, which aims to produce 150,000 Model 3 sedans from its $2 billion Shanghai factory, sold around 30% of the battery electric vehicles […]

EU bets on industrial data, new rules to catch up in global tech