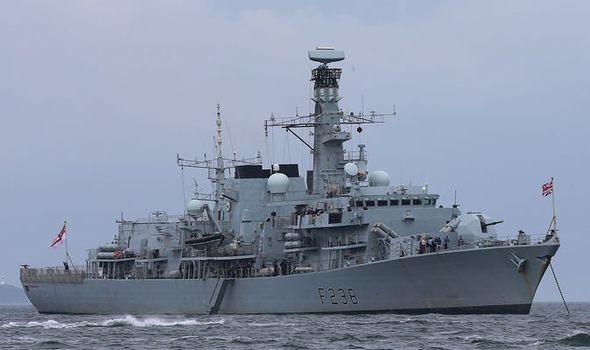 The Russian vessel smashed into a sonar line towed behind by HMS Northumberland. The Type 23 frigate was said to have been scrambled to search for the Russian submarine about 200 miles north of Scotland.

HMS Northumberland let out its towed sonar cable to listen out for underwater sounds and to pick up where the submarine may have been.

However, in a startling collision the cable was reportedly “dragged over the submarine’s hull”.

The Sun said that the crew were then forced to abort the mission and return to port for repairs.

A source told the paper: “It was badly chewed up and unusable.”

Former frigate captain Commander Tom Sharpe said: “The question is was it deliberate or was it an accident.

“Ship and submarine detection is not an exact science. It could have been a close pass gone wrong.”

A Navy source said they believed it was a “million-to-one chance event”.

They added it was highly likely the Russian sub would also have been damaged.

The Russian embassy in London declined to comment when asked by the Sun.

A Ministry of Defence spokesperson said: “In late 2020 a Russian submarine being tracked by HMS Northumberland came into contact with her towed array sonar.

“The Royal Navy regularly tracks foreign ships and submarines in order to ensure the defence of the United Kingdom.”

News of the clash comes amid growing tensions between Russia and the West.

In recent months, there has been a large massing of Russian troops and military equipment on the border with Ukraine.

The build-up of sparked fears of a full-scale invasion of Ukraine, following the Russian annexation of Crimea in 2014.

In a statement to the House of Commons earlier today, Foreign Secretary Liz Truss told MPs what the Government was doing to tackle Russian aggression towards Ukraine.

She said: “Any Russian military incursion into Ukraine would be a massive strategic mistake and would come at a severe cost. We will not accept the campaign Russia is waging to subvert its democratic neighbours.

“It is accompanied by baseless rhetoric and disinformation. They falsely cast Ukraine as a threat to justify their aggressive stance. They falsely accuse NATO of provocation.

“This could not be further from the truth.”

Ms Truss added that Russia’s stance towards Ukraine was “part of a wider pattern of behaviour by the Kremlin, reliant on disinformation and mistrust to seek to gain the upper hand.”

The UK and its allies was working on economic sanctions against Russia if it acts against Ukraine, she said, and was giving a £1.7billion “boost” to Ukraine’s naval capacity.

Ten months ago Deajay Parkinson-Batt died in Palmerston North Hospital when life support was switched off after he was rushed to ICU in critical condition. But after an exhaustive investigation involving a team of highly trained detectives and pathology experts, police say they are stumped by the 2-year-old’s mysterious death and have no idea how […]

GENEVA (REUTERS) – A global licence for serological technology that detects Covid-19 antibodies will be provided royalty-free to poor and middle-income countries under a first of its kind agreement to boost production, the World Health Organisation said on Tuesday (Nov 23). The existing four tests, which check for the presence of Sars-CoV-2 antibodies developed after […]

WASHINGTON (Reuters) – The U.S. Department of Commerce on Monday said it had determined that wooden cabinets and vanities imported from China have been sold at less than fair market value in the United States. The International Trade Commission is scheduled to make its final injury determination on whether U.S. manufacturers have been harmed by […]

‘I will stop London!’ Italian PM vows to move Euro 2020 final to Rome over Covid cases