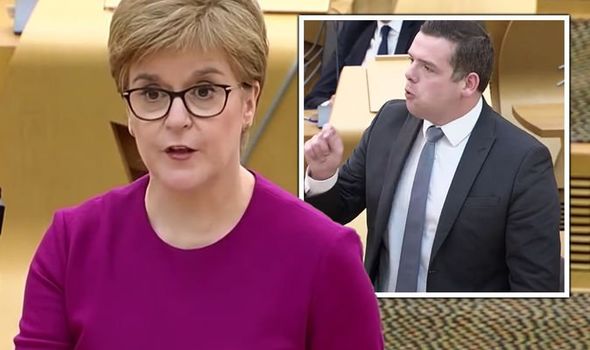 Scottish First Minister Nicola Sturgeon will go head-to-head with Scottish Conservative leader Douglas Ross and Scottish Labour leader Anas Sarwar at FMQs at noon today before the SNP unveils new spending plans. The Scottish Conservatives are calling on Ms Sturgeon’s budget to boost the economy after a post-Covid struggle. The party wants to see Secretary Kate Forbes ignoring colleagues from the Green Cabinet who have “anti-business voices.” Shadow Finance Secretary Liz Smith said: “The SNP have the chance to make a real difference with this budget – they must not squander it.”

Douglas Ross lays out his expectations for the budget

Douglas Ross speaks about his hopes for today’s budget from Nicola Sturgeon.

He says: “It should be a budget that uses the biggest ever block grant from the UK Government invest in public services.

It should be a budget that delivers spending to restore Scotland’s NHS after what will be one of the worst ever winters.

It should be a budget that invests in local roads and rebuilds communities by giving local government, a fair share.

It should be a budget that supports businesses to create Scottish jobs and provide more opportunities for the next generation.

It should be a budget that puts the national interests first, not the narrow interests of this nationalist coalition.”

Mr Ross says there is a “real chance” to kickstart Scotland’s economic recovery from COVID-19 and asks if the First Minister is going to take that opportunity, or is she going to give into the Greens again?

Scottish Conservative leader Douglas Ross asks First Minister Nicola Sturgeon whether it is a “hard-right policy” to support the oil and gas industry.

Ms Sturgeon says she is proud of the progress Scotland has made so far in the journey to net zero but there is still much to do, as they mark the definitive end of coal power in Scotland.

She continued: “What is potentially putting North Sea oil and gas workers jobs at risk right now is the UK government’s failure to invest in the acorn carbon capture project in an Auckland.”

She calls for “less political rhetoric” from Douglas Ross and “a bit more encouraging his colleagues in the UK government.”

Ms Sturgeon says she will continue to ensure that the Scottish government is investing and she supports a “just transition” from fossil fuels to renewable and low carbon energy.

She says she was at the demolition of a chimney at Longannet earlier, which proves that Scotland can move away from coal-fired power without causing mass unemployment.

Nicola Sturgeon laughs when Mr Ross asks her about one of her nationalist minister’s suggestion that supporting Scotland’s oil and gas sector – and the jobs and livelihoods it supports – is “hard right”.

Mr Ross responds back: “I think it is distasteful that the First Minister joked and laughed about a comment from one of her ministers that has been so hurtful to people employed in the North Sea sector.”

Good morning from London. I’m Rachel Hagan, I’ll be bringing you all the latest developments on FMQ’s. Please feel free to get in touch with me as I work if you have a story or tips to share! Your thoughts are always welcome.

Partygate: Conservative MP claims PM "ambushed with a cake" We use your sign-up to provide content in ways you’ve consented to and to improve our understanding of you. This may include adverts from us and 3rd parties based on our understanding. You can unsubscribe at any time. More info In a post for Conservative Home, […]

Stay or Go? Biden, Long a Critic of Afghan Deployments, Faces a Deadline

WASHINGTON — The previous two presidents of the United States declared they wanted to pull all American troops out of Afghanistan, and they both decided in the end that they could not do it. Now President Biden is facing the same issue, with a deadline less than three months away. The Pentagon, uncertain what the […]

Rishi Sunak discusses the Spring Budget When you subscribe we will use the information you provide to send you these newsletters.Sometimes they’ll include recommendations for other related newsletters or services we offer.Our Privacy Notice explains more about how we use your data, and your rights.You can unsubscribe at any time. Chief Secretary to the Treasury […]

Colorado wildfire: Cold front and some rain slows fires on the Western Slope

EU consumers may be able to bring dieselgate claims in home court: adviser