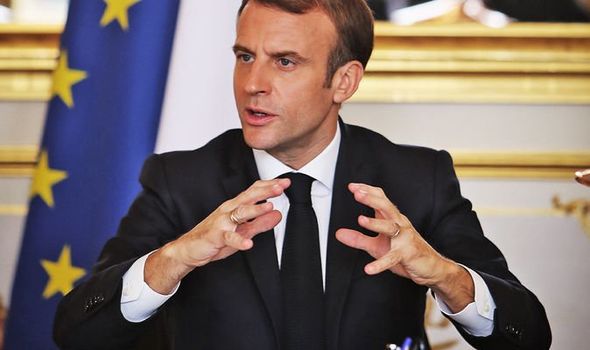 Think tank OECD has said France would also have to cut public sector pay if it is to get its finances in line. The warning about the impending public debt crisis comes in the run-up to next year’s French election – and President Macron has already been accused of spending too freely.

State benefits have been the source of dissent in France in the past, with street protests against leaders threatening cuts.

However, the international economic organisation believes the government must cut back if it is to stabilise the debt.

The OECD said in its recent economic survey of the nation that “significant efforts will be required to stabilise France’s public debt at close to 120 percent of GDP in 2060.”

If France does not take steps now, the OECD forecasts its debt-to-GDP ratio “could rise to 150 percent of GDP in 2060” if the rise in interest rates is greater than projected.

It cautioned: “That would threaten the viability of the public finances.”

France’s debt stands at about 115 percent of its GDP.

For the UK, it currently sits around 97.6 percent, after tipping over the 100 percent mark during the coronavirus pandemic.

The UK has also already pushed back the state pension age to 68 over coming decades as a way of tackling Government spending.

The OECD recommended that France follow suit, suggesting it should be “a priority” for the government.

This should be done in tandem with pushing for longer careers, meaning workers would pay into pension pots for longer.

French workers can currently start drawing a state pension from the age of 62.

They typically contribute to pensions for just 33 years, compared to the average of 38 years in other eurozone nations.

The average French person can expect 26 years of retirement – one year longer than the eurozone average.

France spends 14 percent of GDP on public pensions, compared to 10.2 percent in Germany.

The OECD added that raising the pension age should be just one plank of a larger plan to cut public spending.

It said: “Public spending is high and some expenditures are not effective.”

France has been advised to consider following the British model of multi-year spending reviews to spend more effectively.

Speaking during a televised debate last week, Xavier Bertrand, a potential candidate to face Mr Macron next April, said that, “because of Macron, we will take the responsibility of an over-indebted France”.

He then claimed Mr Macron “campaigns every day with France’s chequebook”, adding on Twitter later that this was something he had been doing for “several months”.

Mr Bertrand’s remarks came during a political debate between himself and four other contenders for the right-wing Les Republicans party nomination, which is due to decide its contender for the presidency next month.

During the debate, Mr Bertrand said Mr Macron had “not undertaken any structural reforms” he had promised, criticising him for his spending habits.

He added: “All this reckless spending is spending that we will have to face. We will need to spend less, but with justice and efficiency.

WELLINGTON (Reuters) – New Zealand’s central bank said on Tuesday that cyber attacks could wipe off about 2% to 3% of the profits of the banking and insurance industries each year, highlighting the need for the industry to counter these threats. Cyber attacks could cost an average of NZ$104 million ($66 million) for the banking […]

By Lucia Mutikani WASHINGTON (Reuters) – The U.S. economy grew moderately in the fourth quarter, the government confirmed, and is facing a bumpy road in early 2020 amid the fast-spreading coronavirus that has left financial markets fearing a recession. Though other data on Thursday suggested some stabilizing in business investment in January and the labor […]

By Ambar Warrick (Reuters) – European shares clocked a record closing high on Friday after EU Trade Commissioner Phil Hogan struck a positive tone on talks with Washington and on optimism over signs of resilience in China’s economy. The pan-European STOXX 600 index <.STOXX> rose as much as 1% to a record high of 424.90, […]

This is another News Portal > World News > Moderate Klobuchar’s ‘stealth campaign’ for U.S. presidency comes to an end