Negotiators still have major disagreements over issues like what sorts of financial aid richer nations should provide poorer ones, as well as how to accelerate emissions cuts. 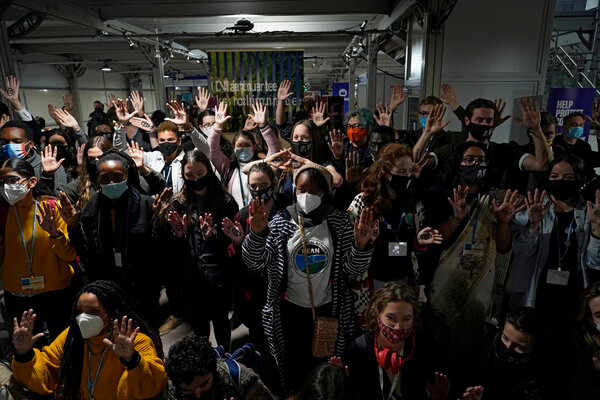 GLASGOW — Organizers of the United Nations climate summit on Wednesday released an initial draft of a new global agreement to fight global warming, calling on countries to “revisit and strengthen” by the end of 2022 plans for cutting greenhouse gas emissions and to “accelerate the phasing-out of coal and subsidies for fossil fuels.”

The language on coal and government fossil fuel subsidies would be a first for a U.N. climate agreement, if it stays in the final version. But many countries and environmentalists said the rest of the document was still too vague on crucial details like what sorts of financial aid richer nations should provide poorer ones struggling with the costs of climate disasters and adaptation.

The draft “is not the decisive language that this moment calls for,” said Aubrey Webson, chairman of the Alliance of Small Island States, a group of countries that are among those most threatened by climate change.

Scientists have said that the world’s nations need to cut global emissions from fossil fuels roughly in half this decade to keep average global temperatures from rising beyond 1.5 degrees Celsius, or 2.7 degrees Fahrenheit, compared with preindustrial levels. That’s the threshold beyond which the risks of deadly heat waves, droughts, wildfires, floods and species extinction grow immensely. The planet has already warmed 1.1 degrees Celsius.

Negotiators here from nearly 200 countries are likely to demand significant changes in the remaining days as the talks enter their last, most difficult stretch. By tradition, a final agreement requires every party to sign on — if any one nation objects, talks can deadlock.

British Prime Minister Boris Johnson returned to Glasgow from London on Wednesday to urge countries to set aside their differences and strike a final agreement. “The world has heard leaders from every country stand here and acknowledge the need for action,” he said. “And the world will find it absolutely incomprehensible if we fail to deliver that.”

But convincing nations around the world — many of which depend on fossil fuels for energy and have their own internal politics and vested interests — to move in a new direction is a Herculean challenge.

China, currently the world’s biggest polluter, issued a joint statement on Wednesday with the United States, its rival and the second biggest polluter, to work together on what it called “an existential crisis.”

The two countries agreed to cooperate on efforts to speed up the transition to cleaner energy and cut emissions faster this decade, though they did not set specific timetables. Previously China has pledged to reach an emissions peak “before” 2030, without setting a firm date, and U.S. officials have been pushing their Chinese counterparts to move more aggressively. China also, for the first time, committed to tackle its methane emissions.

WASHINGTON (Reuters) – U.S. Treasury Secretary Steven Mnuchin told CNBC on Wednesday that President Donald Trump was interested in using road, bridge and other projects to blunt the economic effects of the coronavirus crisis and the administration was having talks about creating an infrastructure plan. “The president has been very clear: he is prepared to […]

BEIJING (Reuters) – Luckin Coffee Inc <LK.O> said on Sunday it will maintain normal operations at its stores and apologised to the public, days after it announced an internal investigation had shown its chief operating officer and other employees fabricated sales deals. Shares of Luckin, which competes in China with Starbucks Corp <SBUX.O>, sank as […]

Factbox: Commodity market impact from the coronavirus in China