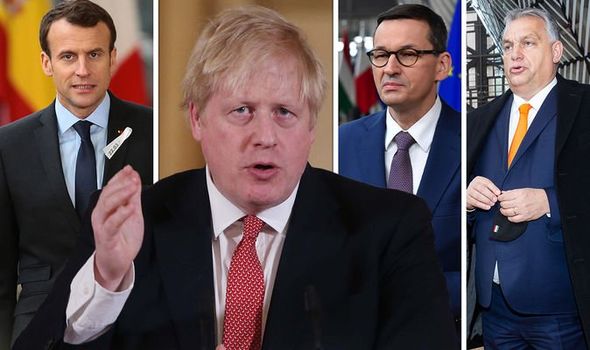 The move comes as sources in the Foreign Office have told the Sunday Express that the UK is building up alliances with more sympathetic countries in the EU amid growing hostility from France. A strong relationship with the Visegrad 4 – Hungary, Poland, the Czech Republic and Slovakia – could see support from the UK for Polexit and the other three countries’ efforts to assert their sovereignty against the EU. A senior source close to Foreign Secretary Liz Truss joked: “Perhaps we should set up an advisory unit on leaving the EU.”

The news has also emerged as talks between Lord Frost and the EU are set to continue next week on changing the controversial Northern Ireland protocol.

Brussels has offered significant concessions in the face of threats from the UK to trigger Article 16 and end the protocol including allowing sausages, food and medicines to travel freely to Northern Ireland from the rest of the UK.

But further changes are needed including on the EU’s demand that its own European Court of Justice is the final arbiter in any disputes.

The tense negotiations are set against a background of growing hostility from France and the EU towards Britain with concerns that they are trying to “punish Britain for Brexit” and that French President Emmanuel Macron’s election campaign next year is fuelling an anti-British stance from his government.

A source close to Ms Truss noted that she had still not spoken to the French foreign minister by the time of the Tory conference earlier month since she was appointed to the role in September.

It is claimed Ms Truss believes that “the EU is basically France” in the way Macron is able to dictate the bloc’s policy as Germany’s influence has reduced following the departure of Angela Merkel.

The EU had complained about her conference speech for “not naming them” or even putting them down as a priority, but Ms Truss is said to be “fairly relaxed about what they think.”.

The source said: “She is talking a lot to the Baltics [Lithuania, Estonia and Latvia] and Visegrad 4. They seem to be far more receptive and friendly. We need to build up our allegiances.”

A diplomatic source from a Visegrad country also emphasised that they are keen to be able to hold talks with Mr Johnson while they hold the EU presidency and see Britain as “a valued ally”.

It is understood that they are pushing for the meeting to be held before the Hungarian elections which are expected in April which could give the Prime Minister Viktor Orban, the first EU leader to demand that the Brexit result was respected, a boost.

Following the row over the Polish constitutional court defying Brussels by ruling domestic law trumps EU law, other countries in the Visegrad 4 and elsewhere in the EU are also preparing to push the boundaries.

The crisis has led to speculation that Poland could end up leaving the EU while others want to end Brussels primacy over their domestic laws.

The diplomatic source noted: “We are waiting for the ruling in Austria which has a similar case and that could be very significant.”

The source also mocked claims by EU leaders that the UK’s problems with supply chains and lorry drivers are because of Brexit.

“I was in Brussels last week and they have empty supermarket shelves there too. This is not Brexit, it is an international problem caused by covid.”

WASHINGTON (Reuters) – U.S. Senate Minority Leader Mitch McConnell called Donald Trump "practically and morally responsible" for his supporters' deadly attack on the Capitol, only moments after voting to acquit the Republican former president on an impeachment charge of inciting the melee. The top Senate Republican explained the unexpected turnabout at the end of a […]

George Galloway slams caller's 'disaster communism' idea We use your sign-up to provide content in ways you’ve consented to and to improve our understanding of you. This may include adverts from us and 3rd parties based on our understanding. You can unsubscribe at any time. More info George Galloway debated with caller Wayne who suggested […]

Boris Johnson joins Ukrainian soldiers training in UK We use your sign-up to provide content in ways you’ve consented to and to improve our understanding of you. This may include adverts from us and 3rd parties based on our understanding. You can unsubscribe at any time. More info Boris Johnson has been a leading voice […]

Covid-19 Delta outbreak: Level 3 boundary in Waikato could be extended if more cases pop up around the region

This is another News Portal > World News > Covid-19 Delta outbreak: Level 3 boundary in Waikato could be extended if more cases pop up around the region