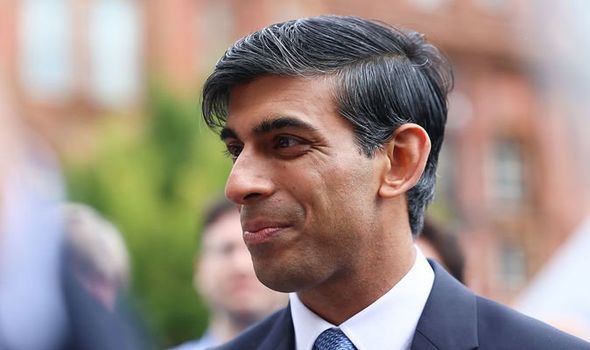 GDP went up by 0.4 percent in August, fuelled by a recreation and entertainment boom, in the first full month after Covid-19 restrictions were lifted.

It means the economy is now only 0.8 percent smaller than it was before the pandemic began.

Forecasts suggest further increases in September as the bounceback continues with the UK economy now the fastest growing in the G7.

But experts have warned that the recovery will have been stifled in recent weeks as global supply chain woes take their toll.

Rishi Sunak welcomed the latest figures, insisting the economy “remains strong”. The Chancellor, on his first official visit to the US, said: “Our economic recovery is continuing with more employees on payrolls than ever before and the UK forecast to have the fastest growth in the G7 this year.

“As we rebuild from the pandemic, we are taking action to ensure our economy remains strong by helping people find great work through our Plan for Jobs.”

Economists say August’s growth, which came after a slight dip in July, slams the door on the prospect of any further tax rises. Julian Jessop, of the Institute of Economic Affairs think tank, said: “The rebound in economic activity will help to repair the public finances without the need for any more tax increases.”

But he indicated interest rates would need to rise, with analysts predicting they could hit 0.25 percent by the end of the year, to cool inflation. He said: “With labour shortages and rising prices now the biggest threat, the focus needs to shift to tackling problems on the supply side.

“The emphasis should be on letting markets work properly, rather than further state intervention and pumping even more money into the economy.”

The Office for National Statistics said growth rebounded strongly in the second quarter of the year, with GDP rising by 5.5 percent.

But the recovery since then has been sluggish, with supply chain problems and the lorry driver crisis holding back the economy.

The ONS data showed that output in the construction sector fell for the second month running, down by 0.2 percent in August following a 1 percent decline in July, as supply holdups led to shortages of key materials and rocketing prices.

Having recovered in April to be 0.9 percent above levels seen before the pandemic, the construction sector is now 1.5 percent below its pre-Covid level.

The ONS added that July’s contraction was also partly due to the difficulties in the car manufacturing industry, which has been affected by a global shortage of microchips.

Samuel Tombs, at Pantheon Macroeconomics, warned it is “implausible” that growth will rise enough in September to remain on track with Bank of England forecasts, particularly given that the full force of the supply crisis is set to be felt from September onwards.

Yesterday Mr Sunak called for “global action” to tackle supply disruption during a meeting of G7 and G20 finance ministers.

It is his first visit to Washington since becoming Chancellor in February 2020, just a month before the first lockdown when the furlough scheme started. He also met the UK’s ambassador, Dame Karen Pierce.

His trip comes as the UK continues to struggle with an HGV driver shortage that is impacting supermarket and fuel deliveries amid warnings this week there could be a shortage of salt gritter drivers this winter.

Mr Sunak used the meeting to encourage further support for vulnerable countries that are also struggling with supply chain issues.

In a statement before the meetings he said: “Global cooperation is key to addressing our shared challenges as we emerge from the pandemic.

“From global tax reform to global supply chains, we must work together to seek international solutions for the benefit of our citizens at home.”

Brexit: Insider discusses UK state aid rules When you subscribe we will use the information you provide to send you these newsletters. Sometimes they’ll include recommendations for other related newsletters or services we offer. Our Privacy Notice explains more about how we use your data, and your rights. You can unsubscribe at any time. Euronext, […]

Jacob Rees-Mogg explains why he endorsed Liz Truss We use your sign-up to provide content in ways you’ve consented to and to improve our understanding of you. This may include adverts from us and 3rd parties based on our understanding. You can unsubscribe at any time. More info The Minister for Brexit Opportunities has revealed […]

Man ‘stabs girlfriend in eyes, bites child’s nose off and throws her out window’