The Faroe Islands has said it will review regulations governing its tradition of hunting dolphins after widespread uproar over the killing of more than 1,400 from a “super pod”.

Campaign group Sea Shepherd released footage showing hundreds of dead animals lying on a beach, while others were herded into shallow waters by boats and jet skis.

The footage showed the water turn red as people killed the dolphins with knives for their meat and blubber. 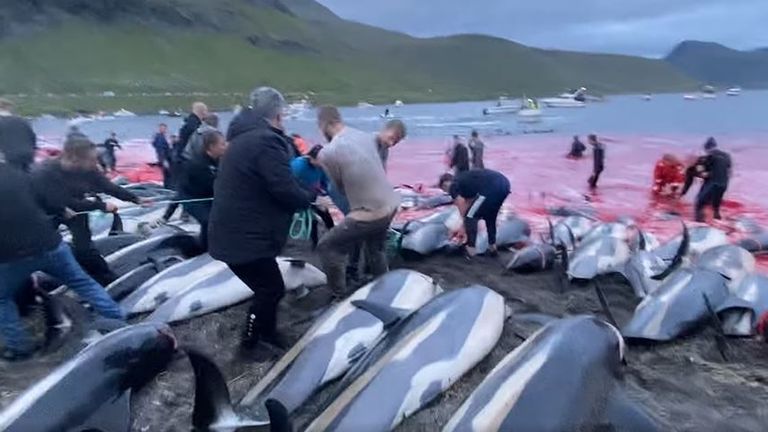 Further out to sea, the fjord boats formed a barrier to stop the Atlantic white-sided dolphins from swimming away.

Sea Shepherd, which is based in the US, described the hunt as “brutal”, with the graphic footage leaving many viewers from around the world shocked and calling for action.

The Sea Shepherd Faroe Islands Campaign Facebook page wrote: “We are sharing with you 10 minutes of unedited footage. We are doing this so you can grasp the reality of what happened yesterday.

“Because while the Faroese newspapers have been busy reporting on the reactions to the hunt all through the day, there has been no proper covering of the actual illegalities and brutality of the hunt.

“What will it take for the locals to demand a shut down of all hunts of this sort?

“We believe it takes a good honest look at the truth.” 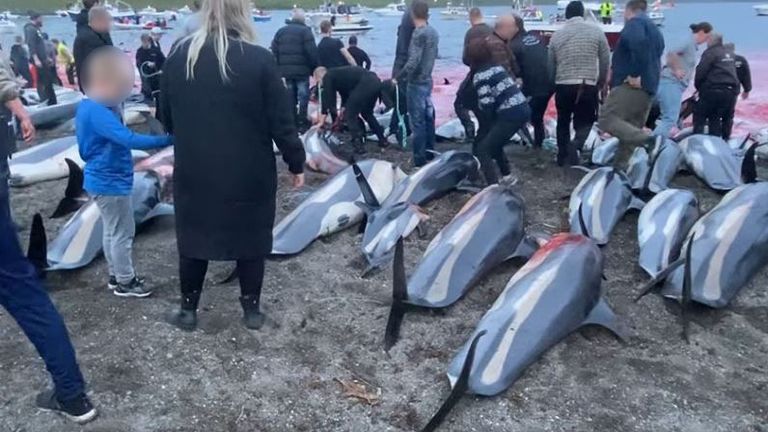 The Faroe Islands has defended its decades-long tradition of chasing dolphins or whales towards the shore and slaughtering them on beaches.

The slaughter has been a part of the archipelago’s tradition since the ninth century, and the meat and blubber are shared within the community.

However, the government said the latest catch had been “extraordinary” due to the size of the pod, and it would look into regulations around the tradition. It said the catch was a record – on average around 250 dolphins and 600 pilot whales are caught each year in Faroese waters, it added.

“We take this matter very seriously. Although these hunts are considered sustainable, we will be looking closely at the dolphin hunts, and what part they should play in Faroese society,” Prime Minister Bardur a Steig Nielsen said.

The Bakkefrost CEO said his firm was not involved in the hunt and none of its assets were used.

U.S., Europe could team up on 5G, but not if trade war under way: German lawmaker

By Andrea Shalal WASHINGTON (Reuters) – The United States and the European Union could team up to counter the dominance of China’s Huawei Technologies in next-generation 5G telecoms technology, but not if Washington continues to threaten tariffs against Brussels, a senior German conservative lawmaker said late on Friday. Norbert Roettgen, a member of German Chancellor […]

By Christoph Steitz and Tom Käckenhoff FRANKFURT/DUESSELDORF, Germany (Reuters) – Swiss elevator maker Schindler <SCHP.S> would embark on an all-out antitrust offensive in the courts to stall any deal to combine Thyssenkrupp’s <TKAG.DE> lift division with rival Kone <KNEBV.HE>, board member Alfred Schindler told Reuters. His comments came a day after the deadline for bids […]

From RNZ A Covid-19 modeller thinks the Government should make it a requirement for those travelling to the South Island to first provide a negative test result. The top of the South Island has had a Labour Weekend scare with an imported Covid-19 case from the North Island shopping at Blenheim on Friday. The unvaccinated […]

Barclays delays incentive payments to CEO, CFO due to coronavirus

What time is Boris Johnson speaking? Press conference with Prof Whitty to be held today

This is another News Portal > Economy > S'pore can seize opportunities in increasingly digital, green and borderless world: Gan Kim Yong