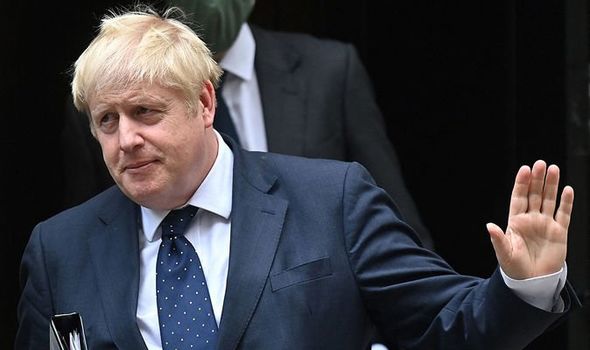 In a defiant message to his Tory critics, the Prime Minister yesterday insisted he will “end the injustice of catastrophic costs” for the long-term care of the frail, elderly and other vulnerable adults. He is determined to press ahead despite concerns his shake-up could cost taxpayers around £10billion a year.

Mr Johnson will set out the details of his long-awaited social care plan today in a statement to MPs.

He will then make a direct appeal to the country at a Downing Street news conference alongside Health Secretary Sajid Javid.

He also confirmed yesterday that the Government will inject an extra £5.5billion into the NHS over the next six months to tackle the huge backlog of treatment and operations left by the Covid pandemic.

The Daily Express understands the cash will expand NHS capacity to 110 percent in the effort to slash hospital waiting lists, with more than 300,000 patients waiting for nonurgent treatment.

Ahead of his statement, the PM said yesterday: “The NHS is the pride of our United Kingdom, but it has been put under enormous strain by the pandemic.We cannot expect it to recover alone.

“We must act now to ensure the health and care system has the long-term funding it needs to continue fighting Covid and start tackling the backlogs, and end the injustice of catastrophic costs for social care.

“My Government will not duck the tough decisions needed to get NHS patients the treatment they need and to fix our broken social care system.”

Mr Johnson has faced a growing outcry from Tory backbenchers concerned at reports he could fund his health and social care package with a hike in National Insurance contributions of around 1.25 percent.

Critics claim the move could dampen the economic recovery from the pandemic by increasing tax for millions of households and businesses, as well as forcing younger workers to pay for care for the elderly.

The PM is expected to fight back today by spelling out the full extent of the crisis that means some have to sell their family homes to fund long-term care.

He will point out that under the current care system anyone with assets over £23,350 has to pay for their care in full.

Some households face spiralling costs and can lose all their family assets. Around one in seven people now pay over £100,000.

Mr Johnson will promise to end the “unfair and often catastrophic discrepancy” that means someone who has dementia pays for their care in full while someone cared for by the NHS receives care for free.

He is understood to have won over sceptical ministers and will sign off the plan at a Cabinet meeting in Downing Street this morning.

Meetings to discuss the social care plan for England have been taking place between the PM and Chancellor Rishi Sunak, it was said.

The £5.5billion for the NHS announced yesterday will immediately go towards supporting the service to manage the immediate pressures left by the pandemic.

The package includes an extra £1billion to help tackle the Covid backlog, £2.8billion to cover related costs such as enhanced infection control measures to keep staff and patients safe from the virus and £478million to continue the hospital discharge programme, freeing up beds.

A further £1.5billion will be spent on improving non-emergency treatment.

Pledging the cash yesterday, the PM said: “The NHS was there for us during the pandemic ‑ but treating Covid patients has created huge backlogs.

“This funding will go straight to the frontline, to provide more patients with the treatments they need but aren’t getting quickly enough.

“We will continue to make sure our NHS has what it needs to bust the Covid backlogs and help the health service build back better from the worst pandemic in a century.”

Mr Javid said: “The NHS has been phenomenal as it has faced one of the biggest challenges in its history.

“Today’s additional £5.4billion funding over the next six months is critical to ensuring the health service has what it needs to manage the ongoing pandemic and helping to tackle waiting lists.

“We know waiting lists will get worse before they get better as people come forward for help, and I want to reassure you the NHS is open, and we are doing what we can to support the NHS to deliver routine operations and treatment to patients across the country.”

Amanda Pritchard, NHS chief executive, said: “This funding provides welcome certainty for the NHS, which has pulled out all the stops to restore services, while caring for thousands of seriously ill Covid patients requiring hospital treatment during the toughest summer on record.

“This additional investment will enable the NHS to deliver more checks, scans and procedures as well as helping to deal with the ongoing costs and pressures of the pandemic as the NHS heads into winter.”

Ministers have been warned that the waiting list for routine operations and treatments could potentially soar to 13 million.

Only two rate rises in the past 20 years

The rate at which employees pay National Insurance contributions has increased twice in the past 20 years.

The most recent rise occurred in April 2011, when the main rate rose from 11 percent to 12 percent.

This increase took place under the Conservative-Liberal Democrat coalition government led by David Cameron, although it had first been announced by Labour under the leadership of Gordon Brown.

In April 2003, Tony Blair’s Labour government increased the rate for employees from 10 percent to 11 percent.

John Major was the last Tory prime minister to raise the rate ‑ from 9 percent to 10 percent in April 1994.

The Biden administration would like you to get a vaccine and wear a mask. Oh, and one more thing: It has just proclaimed that it’s time for government employees and contractors to get off public Wi-Fi, where they can pick up another kind of virus. In a warning to all federal employees, leading defense contractors […]

Coronavirus pandemic ‘will cause long term changes’ says expert When you subscribe we will use the information you provide to send you these newsletters.Sometimes they’ll include recommendations for other related newsletters or services we offer.Our Privacy Notice explains more about how we use your data, and your rights.You can unsubscribe at any time. Former SAGE […]

Nicola Sturgeon grilled over COVID-19 vaccinations in Scotland When you subscribe we will use the information you provide to send you these newsletters. Sometimes they’ll include recommendations for other related newsletters or services we offer. Our Privacy Notice explains more about how we use your data, and your rights. You can unsubscribe at any time. […]

Investors look past UK rating downgrade but flag risks ahead

UK weather: Snow to have ‘major impact on travel’ as yellow warning issued in some areas

This is another News Portal > Business > Business Hub: Serko CEO Darrin Grafton on the changing shape of business travel