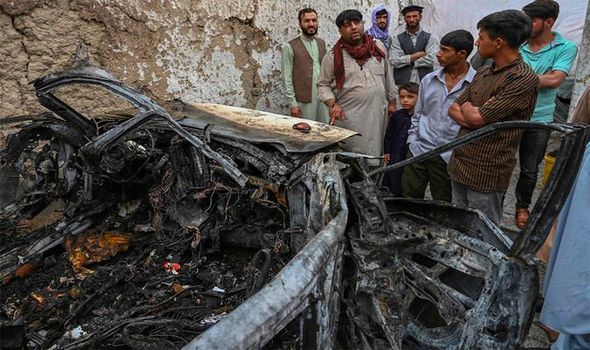 Residents told of hearing several “whooshes” as the rockets crossed the city before being blown out of the sky.

Terrified locals hid as shrapnel from the destroyed missiles crashed down in the neighbourhood of Salim Karwan.

The car which launched them was later pictured on fire in the north of Kabul.

There were no reports of any injuries, and ISIS-K – behind the deadly suicide bombing at the airport last week – later claimed responsibility.

In spite of yesterday’s rocket salvo, the White House stressed there had been no interruption to its evacuations, which last night entered their final phase.

But the American military said it was continuing to hit back after last week’s airport bombing, which killed 13 US service members and more than 150 Afghan civilians.

Yesterday’s foiled rocket attacks followed a deadly US Reaper drone strike on a vehicle which killed an unspecified number of people in a Kabul neighbourhood on Sunday.

The drone strike was launched to stop an attack on the airport.

There were reports yesterday that the dead included 10 Afghan civilians, six of whom were children, and one being a two-year-old girl, according to relatives at the scene.

Last night, the US Central Command said the final death toll from the strike had not yet been confirmed but it was continuing to assess the possibility of there having been civilian casualties.

However, it maintained that the vehicle had been carrying explosives and suicide bombers who were set to target Kabul airport imminently.

Bill Urban, the US Central Command spokesman, said: “We are aware of reports of civilian casualties following our strike on a vehicle in Kabul.

“We know that there were substantial and powerful subsequent explosions resulting from the destruction of the vehicle, indicating a large amount of explosive material inside that may have caused additional casualties.

“It is unclear what may have happened, and we are investigating further.”

Major Gen William “Hank” Taylor also added that the strike had led to secondary explosions from the car destroyed because it contained explosives.

And he stressed that there was an ongoing investigation into the strike which would determine exactly what happened.

Amid the conflict and threat of further ISIS-K attacks, the US was continuing its final flights from the country – with more than 122,000 people now having been evacuated before US President Joe Biden’s original deadline for leaving of today.

Defence department spokesman John Kirby said: “The president has made it very clear that we will maintain robust over-the-horizon counter-terrorism capabilities – the kind of capabilities you have seen us use over the last 24, 36 hours.

“I don’t think it’s helpful for us to talk about what capabilities will look like going forward, and how we’re going to execute it.” But a US official confirmed last night that the last US flight has left Kabul – ending a 20-year campaign in Afghanistan.

Speaking at a Pentagon news briefing, General Kenneth F. McKenzie said: “I’m here to announce the completion of our withdrawal from Afghanistan.”

Mr Biden attended the military ritual, designated for those killed in foreign combat. But he drew criticism after appearing to look at his watch during the ceremony.

By Byron Kaye SYDNEY (Reuters) – An Australian investigator who helped bring criminal cartel charges against Citigroup Inc <C.N> and Deutsche Bank AG <DBKGn.DE> said he first heard concerns about a stock issue they worked on from a rival regulator, but the agencies acted independently. The disclosure on Tuesday in a pre-trial court hearing relates […]

There’s a new water hazard at Harvard Gulch Golf Course. The city-owned course closed in October so that a new irrigation system could be put in, and a nearly 8-acre-foot pond installed north of hole No. 2. Scott Rethlake, Denver’s director of golf, told BusinessDen the plan is to reopen to golfers the middle of […]

JOHANNESBURG (Reuters) – South African President Cyril Ramaphosa has set up a ministerial committee to investigate alleged corruption in state tenders in the fight against COVID-19, his office said on Thursday, including with businesses supplying protective gear. Reports of suspect deals between government officials and businesses providing medical equipment, as well as food aid parcels […]

With rivals stuck in impeachment trial, Biden and Buttigieg to barnstorm Iowa