Across New York the Delta variant has caused a surge of new cases and rising hospitalizations, presenting New York’s incoming governor, Kathy Hochul, with a major public health challenge that is likely to grow between now and the day she officially takes office in two weeks.

Ms. Hochul, who is currently the lieutenant governor, declined to say much that was concrete about the direction she would take on the state’s Covid-19 policies when Gov. Andrew M. Cuomo steps down. Mr. Cuomo announced his resignation on Tuesday after a sexual harassment scandal.

But Ms. Hochul, a moderate Democrat from the Buffalo area who has kept a low profile as lieutenant governor, will soon confront a raft of difficult decisions on everything from guidance on mask rules to vaccine mandates.

In her first news conference on Wednesday as the soon-to-be-governor, Ms. Hochul did not say whether she would declare a new state of emergency to respond to rising transmission, as Mr. Cuomo did last year in March at the height of the pandemic, a restriction that was only lifted in late June of 2021.

She said she would use the next two weeks — while Mr. Cuomo remains governor — to consult with health experts and federal health authorities as she formulated a plan. She added that increasing vaccinations would be her focus.

“I can assure everyone that we’ll be looking at all options, but I believe that the key to get through this has been before our eyes for months,” she said. “It’s as simple as more people getting vaccinated.”

Though the number of new infections and hospitalizations recorded each day are well below the peaks of last winter, the current totals still represent a dramatic rise since late June, when the epidemic seemed to be waning.

On Tuesday, the seven-day average of new infections in New York State reached 3,088, up from a low point of 307 on June 26, according to a New York Times database. Hospitalizations rose to 1,478, from 823 over the same period. 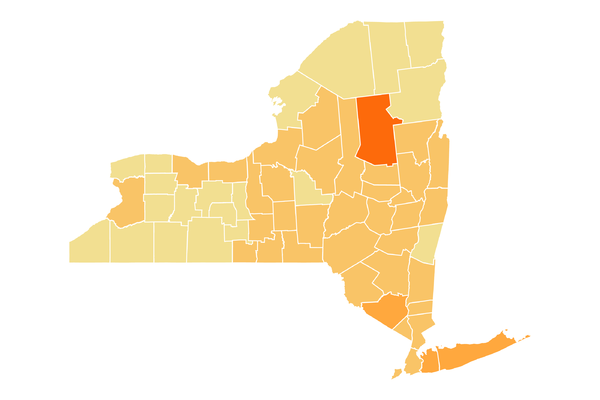 See the latest charts and maps of coronavirus cases, deaths, hospitalizations and vaccinations in New York.

Ms. Hochul said she would work in communities that have high rates of infection and low rates of vaccination to combat resistance to vaccination and increase access to the shots. The current vaccines authorized in the United States protect most fully vaccinated people from developing serious illness from Covid-19, including from the Delta variant.

But getting enough people vaccinated to curb the rise in cases and bring down hospitalizations may require more than just encouragement from officials.

Understand the State of Vaccine and Mask Mandates in the U.S.

By Lucia Mutikani WASHINGTON (Reuters) – U.S. job openings dropped for a second straight month in December to hit their lowest level in two years, while hiring increased marginally, suggesting a recent acceleration in job growth was unlikely to be sustained. The report from the Labor Department on Tuesday also showed a pick-up in layoffs […]

By Ritvik Carvalho LONDON (Reuters) – Financial markets appear to be recovering from the damage done in late January by the coronavirus outbreak in China. Below are six charts showing the effect on financial markets, the projected economic impact and comparisons with the SARS outbreak. 1) STOCKS STABILIZE AS DISEASE CASE GROWTH SLOWS Stocks across […]

IMF projects a recession for sub-Saharan Africa in 2020

JOHANNESBURG (Reuters) – Sub-Saharan Africa’s gross domestic product is expected to contract 1.6% this year, compared 3.1% growth last year, as the coronavirus pandemic wrecks the region’s economies, the International Monetary Fund said on Tuesday . Various African governments have imposed lockdowns and curfews to curb the spread of the coronavirus, but the restrictions are […]