Because nothing beats dimpled bread, soft on the inside and crisp on the outside. 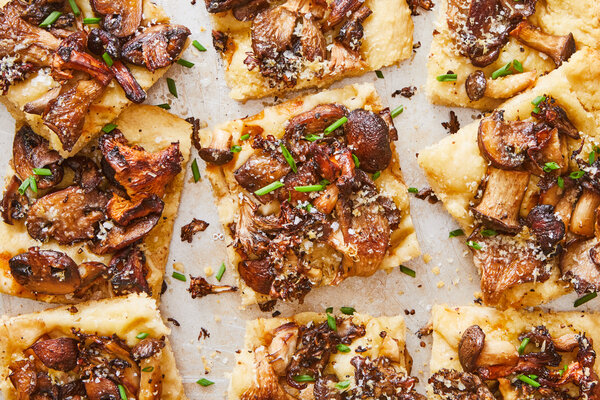 Good morning. Who knows where the desire to cook this dish or that one comes from, what triggers a synapse to fire? I watched a brief video clip of a friend dimpling some focaccia the other day, sun-gold olive oil over a pillowy cloud of dough, and suddenly that was all I wanted to make and eat: eggplant focaccia with ricotta and olives, for instance; focaccia with sweet onions and capers; focaccia with crispy mushrooms (above).

I saw a can of hearts of palm in the back of my pantry and, just like that, I wanted to slice it into slaw with cabbage and avocados; wanted to use it to make palmitos aguachile verde, a mock ceviche with nori, chiles and lime; wanted to dice it as a garnish for the tuna sashimi they used to serve at Nobu Downtown.

I took one look at the photograph of this platter of naan-o paneer-o sabzi, an Iranian dish of lavash, feta and herbs and — wham! That had to be dinner, right away.

It’s cool to experience that inspiration, when it happens. Someone says caramelized zucchini and another responds, wow, and caramelized zucchini pasta is born. You catch a whiff of cilantro in the market, something crackles in your brain and there needs to be cilantro rice for dinner, or spinach-and-cilantro soup.

Or someone just tells you: Melissa Clark has a new recipe. Immediately it’s go time for many: almond cake with peaches and cream. Melissa’s recipes always deliver.

And if for some reason none of those recipes appeal? We’ve collected thousands and thousands more prompts for your cooking attention on New York Times Cooking. (You’ll need a subscription to access them, of course. Subscriptions are what make this whole operation possible. If you haven’t taken one out already, I hope you will subscribe today. Thank you.)

You can find even more on our Instagram page and on our YouTube channel, where Eric Kim recently went to teach us all how to cook salmon with crispy skin.

Nota bene: We are standing by to help if anything goes wrong while you’re cooking or using our site and apps. Just write: cookingcare@nytimes.com and someone will get back you.

Now, it’s nothing to do with pork butts or steak tartare and that’s a good thing: Tejal Rao’s newsletter “The Veggie” launches tomorrow, and you ought to sign up. Her ode to the endless pleasures of vegetarian cooking in The Times this week makes the case for why better than I ever could.

For The Times, Priya Krishna took a look at a complicated question: “Why Do American Grocery Stores Still Have an Ethnic Aisle?”

And Kim Severson visited with some farmers in Atlanta who are part of a new program attempting to bridge the gap between tiny urban farms and huge industrialized ones — what is called the “agriculture of the middle.”

Here’s Dan Kois in Slate, examining his role in the failed promise of the Segway scooter, a terrific read.

Finally, the guitarist Paul Cotton’s death last month at 78 got me playing a lot of Poco, the country-rock band he joined in 1970. Here’s “Magnolia,” live. Listen to that and I’ll be back on Friday.

‘Confident’ Prince George now has ‘what it takes’ to be king, source says

Prince George’s “confidence has grown” and he has “what it takes” to be king, a royal source has said. Speaking to Us Weekly, the insider described the eight-year-old prince as “assertive, self-assured”, adding that he “knows what he wants and doesn’t hold back on speaking his mind”. The source said: “Prince George is already showing […]

A hopeful Miss America candidate has spoken of her heartbreak after her husband was shot in an unprovoked attack in front of their two-year-old son. Christine Kozlowski Hand, 33, is pregnant with the second child of husband Thomas Hand, 37, and had never interacted with the assailant before the fatal attack. Speaking to the Daily […]

(Reuters) – Chinese officials are hoping that the United States will agree to flexibility on some promises in the Phase 1 trade deal as China deals with the outbreak of coronavirus, a Bloomberg reporter said https://twitter.com/SalehaMohsin/status/1224348944043560962?s=20 in a tweet on Monday. The U.S.-China trade deal has a clause that the countries consult in the event […]

British Airways COO and director of people to leave

In TV Ratings, Trump vs. Biden Was No Match for Trump vs. Clinton