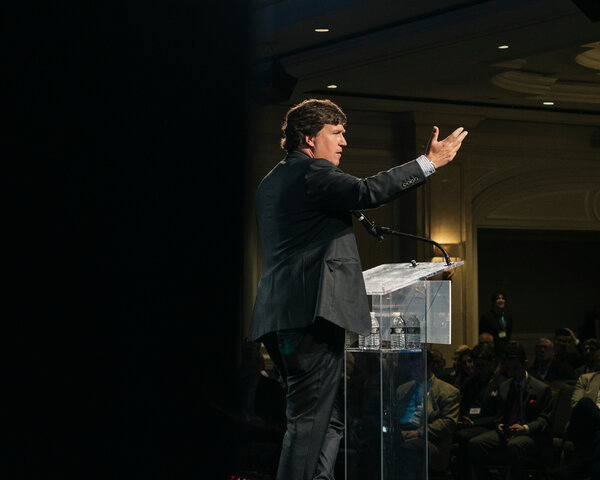 Tucker Carlson is only the latest — and most famous — American conservative to find inspiration in the autocratic government of Hungary under Viktor Orban. The Fox News personality is hosting his show, one of the most popular on cable news, from the capital in Budapest and on Saturday will deliver a speech, advertised as “The World According to Tucker Carlson,” to a conference of far-right activists.

To critics, Orban’s Hungary is corrupt, repressive and authoritarian, a place where democracy is little more than window-dressing and the state exists to plunder the public on behalf of a tiny ruling elite. To Carlson, it’s a model for the United States, a showcase for anti-immigrant policies and reactionary cultural politics.

“If you care about Western civilization and democracy and families and the ferocious assault on all three of those things by the leaders of our global institutions,” he told his audience on Monday, “you should know what is happening here right now.”

Carlson is not alone. “Orban’s fans in the West include notable writers at major conservative and right-leaning publications like National Review, the American Conservative and the New York Post,” Zack Beauchamp wrote in a piece for Vox last year.

Orban’s American admirers include the political philosopher Patrick Deneen, J.D. Vance, the author of “Hillbilly Elegy” who is now running for the Republican Senate nomination in Ohio, and Rod Dreher, a popular conservative blogger and author.

“Which is the only power capable of standing up to Woke Capitalists, as well as these illiberal leftists in academia, media, sports, cultural institutions, and other places? The state,” Dreher wrote on Wednesday. “This is why American conservatives ought to be beating a path to Hungary.”

At this point, students of American political history — and specifically students with a working knowledge of the history of the conservative movement — will recognize something familiar about this story. Here we have prominent conservative writers and intellectuals using their platforms to support or endorse regimes whose politics and policies align with their preoccupations, even as the values of those regimes stand in direct opposition to the ideals of American democracy.

We’ve seen this before. Many times, in fact.

In 1957, William F. Buckley Jr. published a “Letter from Spain” in the pages of his magazine, National Review. An admirer of the Spanish dictator Francisco Franco, Buckley did not hesitate to praise him in the most effusive terms he could muster:

General Franco is an authentic national hero. It is generally conceded that he above others had the combination of talents, the perseverance, and the sense of righteousness of his cause, that were required to wrest Spain from the hands of the visionaries, ideologues, Marxists and nihlistis that were imposing on her, in the thirties, a regime so grotesque as to do violence to the Spanish soul, to deny, even Spain’s historical identity.

Five years later, in 1962, Buckley traveled to Mozambique — then under Portuguese colonial rule — where he wrote favorably of the status quo and condemned the United Nations for its anti-colonialism.

Its influence on the West is disastrous. Its influence is also disastrous on the peoples in whose name it allegedly speaks: the Egyptians dictated to with more finality by Nasser than by Farouk; the Ghanaians, imprisoned by Nkrumah as they never were by the Colonial Secretary; the Congolese, under the chaos of Adoula where once they had order and, slow though it was, progress — more progress than they had made in the thousands of years during which they were governed by tribal despots.

And in 1963, Buckley had these sympathetic words for the apartheid government in South Africa:

They may be wrong, as we may be: but we should try at least to understand what it is they are trying to do, and deny ourselves that unearned smugness that the bigot shows. I cannot say, “I approve of Apartheid” — its ways are alien to my temperament. But I know now it is a sincere people’s effort to fashion the land of peace they want so badly.

Buckley was not the only writer at National Review to defend and express admiration for Western-aligned autocracies. In 1975, Robert Moss wrote an extended defense of Augusto Pinochet and the military coup in Chile for the magazine called “The Tribulation of Chile.” Moss downplayed the brutality of Pinochet’s newly minted military dictatorship and urged Americans to support his so-called reforms:

No one pretends that it will be easy, and with so many people going short, it is hard to be optimistic about the prospects for Chile’s new-style capitalism in the near future. There are men in the armed forces who are far from enthused about it. But all in all, it is a brave attempt that deserves more understanding — and active support — from what remains of the capitalist world.

And in 1977, James Burnham, a staunch anti-communist and one of the most influential conservative political theorists of the postwar years, wrote a brief defense of the apartheid government in the former Rhodesia (now Zimbabwe).

“Although under the present Rhodesian government only 5 percent of the population possesses a considerable degree of democracy, that is of itself enough to put Rhodesia well up on the democratic scale,” he said, dismissing American and international critics of the apartheid state. To the charge that the “Rhodesian government is white racist,” Burnham was blunt:

Mere racism is no crime; is, rather, a common human impulse, almost as integral as hunger, aggression and sexual desire.

Whatever its source, conservative defenses of, and even affectation for, foreign autocracies — of which enthusiasm for Orban’s Hungary is only the latest example — is too consistent to ignore. It is also, at the same time, a phenomenon of conservative elites, too niche to attribute to the entire movement or its rank-and-file.

Rather than treat it as a pathology of conservatism writ large, I am inclined to follow the lead of Jeet Heer, a columnist at The Nation, who sees this enthusiasm as a form of “transferred nationalism,” a term borrowed from George Orwell’s famous 1945 essay “Notes on Nationalism.”

“In societies such as ours,” writes Orwell, “it is unusual for anyone describable as an intellectual to feel a very deep attachment to his own country”:

Public opinion — that is, the section of public opinion of which he as an intellectual is aware — will not allow him to do so. Most of the people surrounding him are sceptical and disaffected, and he may adopt the same attitude from imitativeness or sheer cowardice: in that case he will have abandoned the form of nationalism that lies nearest to hand without getting any closer to a genuinely internationalist outlook. He still feels the need for a Fatherland, and it is natural to look for one somewhere abroad. Having found it, he can wallow unrestrainedly in exactly those emotions from which he believes that he has emancipated himself.

“Transferred nationalism” isn’t an exclusively conservative phenomenon. The Soviet Union, for example, was a source of fascination for many American leftists through the 1930s and into the Second World War.

But at this moment in American life, it’s conservatives who have set their sights abroad. Parts of the movement have even adopted a kind of anti-Americanism; a contempt for the United States as it exists. These conservatives still call themselves “patriots” — and disdain their opponents as “traitors” — but theirs is an abstract loyalty to an idealized country. “When they contemplate the actual United States,” Beauchamp wrote in Vox, “they are filled with scorn.”

It makes sense that as this tendency develops, so too does the yearning for a country that can be hailed as a model and a lodestar — the soaring and gilded counterpoint to our fallen and decadent society.

But that too is projection. And sooner or later, the conservatives who hail Hungary under Orban as an attractive alternative to the United States will see that their vision of that country is as false as their image of this one is.

The Times is committed to publishing a diversity of letters to the editor. We’d like to hear what you think about this or any of our articles. Here are some tips. And here's our email: letters@nytimes.com.

Produced by ‘The Ezra Klein Show’ There has been a bit of panic lately over employers who say not enough people want to apply for open jobs. Are we facing a labor shortage? Have stimulus checks and expanded unemployment insurance payments created an economy full of people who don’t want to work — and who […]

Opinion | In Haiti, Coups Are in the Eye of the Beholder

Catherine Buteau, a 33-year-old marketing and communications specialist in Montreal, woke up on Feb. 7 to a lot of missed calls on her phone. Her relatives in Haiti had been desperately calling her. Her father, mother and aunt had been snatched from their beds in Port-au-Prince in the middle of the night. “No one knew […]

Opinion | What to Do About Student Loan Debt?

To the Editor: Re “Is This Where We Are, America?,” by Roxane Gay (Op-Ed, Nov. 23): I am a retired lawyer who spent hours reading federal student loan regulations in order to understand how and why my daughters’ 10-year-old student loan obligations far exceeded the amounts they had borrowed. The short answer was interest, interest, […]