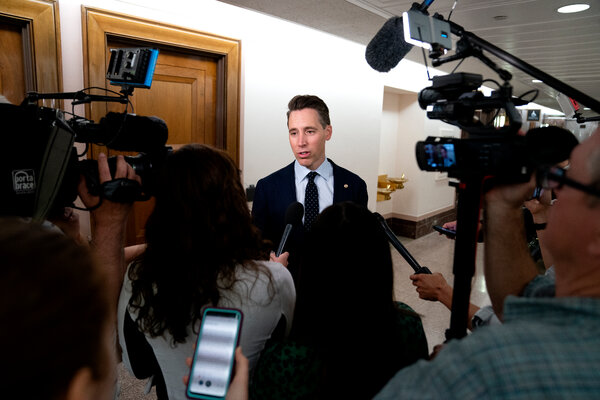 WASHINGTON — When it comes to reining in presidential war powers, Senator Josh Hawley of Missouri, regarded as a leading prospect for the 2024 Republican nomination, agrees with President Biden.

Mr. Hawley supports repealing a decades-old law authorizing the use of military force in Iraq, which has been invoked as part of the legal justification for other military strikes since then and have become the initial focus of a broader effort to re-examine how much leeway Congress should give presidents to wage war.

“It’s time to kill this,” Mr. Hawley said of the law passed in 2002 to authorize the invasion of Iraq under President George W. Bush.

The senator, who has styled himself as former President Donald J. Trump’s populist heir, said it was a matter of listening to his party’s voters, who he said want “to get out” of the nation’s wars.

His stance reflects a tentative but notable shift underway among Republicans as the United States haltingly disengages from what critics call the “forever wars” in Afghanistan and Iraq and continues to debate how to battle terrorist groups in the Middle East and Africa.

After espousing hawkish, interventionist positions for decades and almost uniformly backing the wars in Afghanistan and Iraq, the Republican Party is now grappling with political pressure to align itself more closely with the inward-looking “America First” foreign policy articulated by Mr. Trump and backed by many conservative voters. It parallels similar foreign policy shifts Republicans have made in recent years to hew closer to Mr. Trump’s views, including a move away from their support of free trade and a growing appetite for aggressive federal intervention to bolster American competitiveness against China.

Many Republicans remain opposed to repealing the Iraq-related authorization. And they have shown little enthusiasm for getting rid of the much broader war authorization passed by Congress after the Sept. 11 attacks, which has been used by successive administrations of both parties as the main legal basis for a wide range of military actions.

Still, the shifting politics of the issue have helped to fuel the first significant bipartisan effort in a generation to curb a president’s authority to take military action.

Legislation taking shape in the Senate to repeal both a 1991 authorization for the Persian Gulf War and the 2002 law, an effort blessed by Mr. Biden, is partly symbolic, given that the government says it is not relying on either of them. But it reflects a growing consensus in favor of reasserting Congress’s influence over matters of war and peace, driven at least in part by the changing Republican political calculus.

The House, with support from dozens of Republicans, passed two bills in June repealing the Iraq measures, and on Wednesday, as a Senate committee approved legislation to repeal both, Senator Chuck Schumer, Democrat of New York and the majority leader, confirmed that he would bring it up this year. The debate would be the first time in years for lawmakers to weigh in on an attempt to claw back presidential war-making powers that could actually be signed into law.

PM ‘should call vote of confidence himself’ says Nadler We use your sign-up to provide content in ways you’ve consented to and to improve our understanding of you. This may include adverts from us and 3rd parties based on our understanding. You can unsubscribe at any time. More info Mr Johnson is already facing growing […]

As Pelosi’s Majority Thins, House Democrats Are in a Tight Spot

As Democrats’ election losses continue to pile up, Speaker Nancy Pelosi is preparing to lead what may be the slimmest House majority in nearly two decades, with little room to maneuver between its feuding progressive and moderate wings as she works to deliver President-elect Joseph R. Biden Jr.’s agenda. Ms. Pelosi, who muscled her way […]

Fuming Starmer cut off by speaker as he blasts ‘dishonest’ Boris – ‘Withdraw that!’

Starmer told to withdraw ‘dishonest’ comment We use your sign-up to provide content in ways you’ve consented to and to improve our understanding of you. This may include adverts from us and 3rd parties based on our understanding. You can unsubscribe at any time. More info The Labour leader took aim at the Prime Minister […]

Vodafone to remove Huawei from core of European network