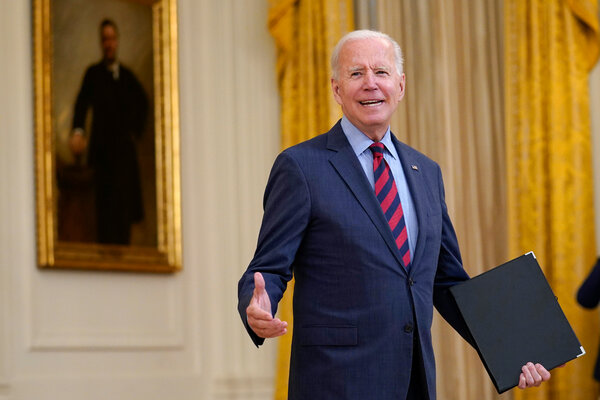 ‘I know this isn’t easy’

The federal government continues to pressure private companies to introduce coronavirus vaccine mandates to help the U.S. raise its inoculation rates. To make it easier, the F.D.A. is accelerating its timetable to fully approve the Pfizer-BioNTech vaccine, aiming to complete the process early next month.

And yesterday, Mayor Bill de Blasio of New York said the city would require proof of vaccination for people to eat indoors, exercise at gyms and go to shows. President Biden said other cities should follow New York’s lead. “You have to give proof that you’ve been vaccinated or you can’t come in,” he said.

These recent moves address the growing class divide in vaccinations that DealBook pointed out on Monday. Some of the latest mandates cover frontline, blue-collar workers who are often more exposed to the virus, but have lower vaccination rates, in addition to office-based, white-collar workers who have been the focus thus far, despite high rates of inoculation.

“The folks who want to come back to the office are all vaccinated,” said Kathryn Wylde, the president of Partnership for New York City, an influential trade group. “What they’re worried about is all the people on the subways and in the streets who aren’t.” She agreed with the mayor’s move, but is worried about its potential effect on the city’s economy.

“Look, I know this isn’t easy, but I will have their backs,” Biden said yesterday, thanking Walmart, Google, Netflix, Disney and Tyson Foods for mandating vaccines for their workforces despite, in some cases, pushback by unions. (Tyson’s mandate on Tuesday was notable for covering all of its 120,000 workers in the United States, including those in slaughterhouses and poultry plants.) Other companies “have declined to step up,” Biden said. “I find it disappointing.”

As for mandates on customers, like the one announced in New York City, some businesses like Danny Meyer’s Union Square Hospitality Group, which runs Blue Smoke and Gramercy Tavern, have already made the move. Others are less sure. “I don’t want the government mandating anything to me,” Tilman Fertitta, the C.E.O. of Landry’s, the parent of Del Frisco’s, Bubba Gump Shrimp and other chains, told CNBC. “I don’t know that I’m quite there yet, telling you you can’t come into my restaurant unless you’re vaccinated.”

It’s not like asking for ID for a drink. Vaccine mandates for restaurants could make an establishment more appealing for some, but also create the potential for strife, as with mask requirements. (The logistics of monitoring New York’s 25,000 restaurants and bars will also be challenging, to say the least.) “Checking vaccination status isn’t like ID-ing a customer before serving them a drink,” a spokesperson for the National Restaurant Association told DealBook. In France, a similar mandate prompted protests.

The country is deeply divided on the issue of mandates, making matters difficult for companies with national footprints to set consistent policies. Ten states have passed legislation to prohibit schools, businesses and state governments from mandating the vaccine, according to the National Conference of State Legislatures. Fourteen have passed legislation to prohibit vaccine passports or proof of vaccination in general. “If you aren’t going to help,” Biden said, addressing the governors of these states, “at least get out of the way of the people who are trying to do the right thing.”

Do you know if your co-workers are vaccinated? Would you take a vaccine mandate into consideration when taking a job? The Times wants to hear your thoughts: Please share your experiences here.

An inquiry finds that Gov. Andrew Cuomo sexually harassed several women. The report by the New York State attorney general said that the governor had violated both federal and state laws, and the Albany County district attorney said that Cuomo was under criminal investigation. Biden and other Democrats called on Cuomo to resign. Cuomo disputed the report, calling it biased.

Gary Gensler questions the “Wild West” nature of the cryptocurrency industry. The S.E.C. chair has been increasingly vocal about protecting investors in the nascent sector, saying in a speech yesterday that “if this innovation has any chance of surviving” into the 2030s, “it can’t stay astride of the public policy.”

A top video game executive departs after 1,500 employees walk out. Employees protested Activision Blizzard’s dismissive response to a lawsuit that accused it of fostering a “frat boy workplace culture.” J. Allen Brack, the president of its Blizzard Entertainment studio, stepped down yesterday after being accused of failing to take “effective remedial measures” in response to harassment and discrimination complaints.

Biden issues a new eviction moratorium. The Biden administration announced a 60-day federal moratorium in areas hit hardest by the coronavirus, a targeted approach intended to sidestep a potential Supreme Court challenge. It followed a sleep-in on the Capitol steps, led by Representative Cori Bush, Democrat of Missouri, pressuring Biden to act after a nationwide eviction ban expired over the weekend.

Passing the CFA exam, at the best of times, is tough. The test, which confers chartered financial analyst status, has three levels, and study times average 300 hours per level.

Last week, the CFA Institute reported that the Level I pass rate dropped to 25 percent for exams taken in May, the lowest since testing began in the 1960s. Yesterday, the institute revealed that the latest Level II success rate fell to 40 percent, the third-lowest rate on record.

It was the first time some tests were administered via computer.

Covid protocols delayed some from starting the test on time.

The CFA Institute denies all of those. Instead, it said pandemic test delays had disrupted study plans.

Here’s another theory: CFA status, a résumé booster that can open doors and fetch a higher salary, may not seem as essential right now, given the complications of Covid restrictions and the desperation of financial firms to hire workers with deal flow so high and morale so low. This week, Goldman Sachs joined its Wall Street rivals in increasing pay for junior bankers across the board. That could have factored into why fewer people recently sat for the CFA exams and, when they did, may not have put in their best performance.

Understand the State of Vaccine Mandates in the U.S.

Fashion blazed the path forward last month for retail — and some of the industry’s top executives were on Wall Street, virtually banging the drum and making the case that it’s them leading the way.  May apparel and accessories specialty stores sales rose 3 percent from April and were up more than 200 percent versus […]

Five reasons the ECB didn't follow the Fed on inflation