The suits are returning to the office. In chinos. And sneakers. And ballet flats.

As Wall Street workers trickle back into their Manhattan offices this summer, they are noticeable for their casual attire. Men are reporting for duty in polo shirts. Women have stepped down from the high heels once considered de rigueur. Ties are nowhere to be found. Even the Lululemon logo has been spotted.

The changes are superficial, but they hint at a bigger cultural shift in an industry where well-cut suits and wingtips once symbolized swagger, memorialized in popular culture by Gordon Gekko in the movie “Wall Street” and Patrick Bateman in the film adaptation of Bret Easton Ellis’s novel “American Psycho.” Even as many corporate workplaces around the country relaxed their dress codes in recent years, Wall Street remained mostly buttoned up. 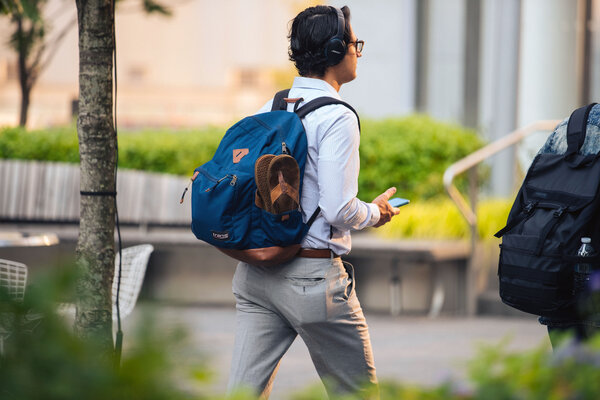 Like so much else, that changed in the pandemic. Big banking firms, including Goldman Sachs, JPMorgan Chase and Citigroup, have realized that their employees are loath to reach for their corporate attire, after more than a year of working from home dressed mainly in loungewear, or Zoom-appropriate shirts on top and sweatpants below. As banks get their workers back to their desks — even as some other companies have paused such plans — senior executives are easing up on dress codes as a concession to their weary staffs.

Although banks haven’t sent out formal memos, their informal message is that returning employees should feel free to dress appropriately for the occasion — and that during a summer with few in-person client meetings, more relaxed attire is permissible. Jeans have even shown up on trading floors, and bankers have a wealth of opportunities to spring a familiar workplace joke: What’s with the tie? Got a job interview?

Formal dress codes began to erode in the 1990s when Casual Fridays were introduced in workplaces, said Daniel Delis Hill, a fashion historian. “I was working at Merrill Lynch in 1999 when the big shock came from the C.E.O. that brokers could now wear business casual on Fridays,” Mr. Hill wrote in an email. “There was a long list of dos and don’ts, though,” he said — jeans were definitely not allowed.

Despite periodic efforts to relax dress codes — including in 2019, when Goldman made suits and ties optional — banking had been one of the last bastions of formal work wear, alongside law firms. And in some quarters of Wall Street, such as hedge funds, the code has typically been more permissive.

But in banking, the strict hierarchies were embedded in unwritten fashion rules. Colleagues would ridicule those wearing outfits considered too flashy or too shabby for the wearer’s place in the corporate food chain. Superiors were style guides, but wearing something swankier than one’s boss was considered a faux pas. An expensive watch could be seen as a mark of success, an obnoxious flex, or both.

These days, some bosses have ditched luxury timepieces in favor of Apple Watches and traded suits for short sleeves and khaki, making it tricky for subordinates to know what to wear in order to look the part. JPMorgan’s chief executive, Jamie Dimon, recently wore a black polo shirt for a TV interview; Goldman’s boss, David Solomon, D.J.s in T-shirts on weekends; and Rich Handler, the head of Jefferies, posted a photo of himself sporting a henley tee on Twitter. At an event welcoming employees back to the office in July, Citigroup’s Jane Fraser — the only female boss of a major Wall Street bank — kept her signature look: a jewel-toned dress.

“The days of people having to wear the uniform of a coat, tie and suit are over,” said John Florsheim, a fifth-generation scion of the namesake brand, known for its leather-soled dress shoes for men and boys. “It’s going to continue to get more comfortable and casual, but people are still going to want to look nice.”

Now, 80 percent of the shoes his company designs are casual styles, Mr. Florsheim said, compared with 50 percent before the pandemic.

Another reason banks are doing away with traditional dress codes is talent retention. As Wall Street firms increasingly compete for recruits with technology companies — which are friendlier both to remote work and casual clothing — they are seeking to present a less stuffy image. Many banks are also trying to hire a more diverse cohort.

John C. Williams, president of the Federal Reserve Bank of New York and an avowed sneakerhead, said the Fed wanted people to bring their “authentic self” to work because personal style was an important part of valuing all forms of individuality and diversity.

He said he was looking forward to wearing new pairs from his sneaker collection in the office. “When people can be themselves, they do their best work,” he said.

“There is this urge to break down this idea of what you need to look like to work in banks,” said Alison Taylor, who teaches courses on professional responsibility at New York University’s Stern School of Business. “It’s such a fraught, unspoken signifier of whether you do or don’t fit in.”

Big lenders vary in their plans to bring staff back to offices. Most of the industry was targeting Labor Day for a full-scale return, although that may be complicated by surging coronavirus cases. Some Wall Street employees have been working out of their offices for months, but many returned only recently for the first time since the outbreak began.

It felt like the first day of school, some bankers said. They wanted to look good in front of colleagues, yet couldn’t bear the thought of wearing dress shoes or heels. Before going in, some checked with friends to see if their choices were in line with the crowd.

One item that has been popular among Wall Street men is Lululemon’s ABC pant, which the athleisure company markets as a wrinkle-resistant, stretchy polyester garment suitable for “all-day comfort.” (The company put its highly recognizable logo on a tab near the pocket to make the pants look less like workout gear.)

Untuckit, the maker of short-hemmed button-downs, saw a jump in sales as vaccination rates across the United States rose in April and May, said Chris Riccobono, the company’s founder. Customers have flocked to its two stores in Manhattan, seeking still-sharp shirts made from breathable fabric.

“What’s amazing is these guys were wearing suits in the middle of summer, walking the streets of New York, coming off the train” before the pandemic, Mr. Riccobono said. “It took corona for the guys who never wore anything but suits to realize, ‘Wait a second.’”

FILE PHOTO: Rubin Ritter, member of the board of Zalando Operations, attends the company’s annual shareholder meeting in Berlin, Germany May 31, 2017. REUTERS/Hannibal HanschkeBERLIN (Reuters) – Rubin Ritter, who has been co-chief executive of German online fashion company Zalando since 2010, will step down next year, leaving Robert Gentz and David Schneider to continue […]

SEOUL (Reuters) – Samsung Electronics (005930.KS) said on Monday its U.S. unit won a 7.9 trillion won ($6.7 billion) order to provide wireless communication solutions to Verizon (VZ.N) in the United States. The order is for network equipment, a Samsung spokesman said, but declined to comment on detailed terms the contract, such as the portion […]

California congressman convicted in corruption case to resign next week

Mobile World Congress in Barcelona called off over coronavirus fears