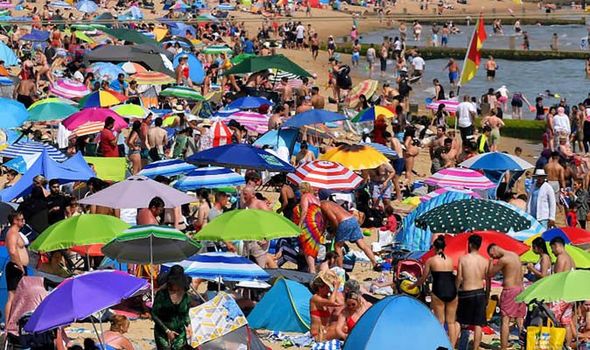 Yesterday water safety experts pleaded with people not to venture into potentially hazardous open water in the heat. In Derbyshire yesterday the body of a 15-year-old boy was recovered from the River Trent near Swarkestone. Specialist police teams were called on Tuesday night after reports of a youngster in difficulty in the water.

In West Yorkshire, police confirmed that Caden Taylor, 15, had been found dead in a canal in Knottingley, at 6pm on Tuesday.

Last night in the Lake District, police found a man in his 30s in Brothers Water. The man, from Newcastle, was with a group when he vanished on Tuesday evening.

Also in the Lakes, divers were still searching Crummock Water, near Buttermere, after a 30-year-old man from London went missing last Friday.

Lee Heard, from the Royal Life Saving Society, said: “The difference between the air temperature and water temperature can literally take your breath away…it is silent, invisible and deadly.

“Water can also hide debris, strong currents and sudden changes in depth that can catch out even the strongest swimmers.”

On Saturday in Blackpool, Lancashire, a 29-year-old man from Bolton drowned in the sea and on the same day, the body of Mohammad Abdul Hamid, 16, was found in the River Eden, in Carlisle, Cumbria.

On the same day at the River Ouse in York, North Yorkshire, police recovered the body of a man in his 50s and Thames Valley Police pulled the body of a teenage girl from Ducklington Lake in Witney, Oxfordshire.

In Buxton, Derby­shire, a man’s body was recovered from disused Victory Quarry on Sunday evening.

In West Yorkshire, a man’s body was recovered inWakefield on Monday at Pugneys Country Park and, on the same day, a 16-year-old boy drowned after falling into the River Weaver, at Frodsham, Cheshire.

In Sheffield, South Yorkshire, a man’s body was pulled from a lake at Crookes Valley Park.

Police confirmed a second man is in a critical but stable condition.

In Hertfordshire, a man died on Tuesday evening after getting into difficulty at Stanborough Lakes in Welwyn Garden City.

The heat also claimed the lives of sportsmen.

On Saturday, cricketer Maqsood Anwar, 45, died from a suspected heart attack while bowling in Barry, SouthWales.

And on Monday at Tower Hamlets, in London, a man collapsed while playing football.

Lionel Messi was in tears as he bade farewell to FC Barcelona – but said he has not yet decided on his future. “I’m so grateful for the love people have shown me these years,” he told a news conference. The striker, who broke down as he received a standing ovation, said he tried to […]

By James Oliphant WASHINGTON (Reuters) – Bernie Sanders’ convincing win in the Nevada caucuses signaled his campaign is gathering strength and reaching voters who had previously eluded him, putting him on a path – for now – toward the Democratic presidential nomination. The self-described democratic socialist’s triumph on Saturday left all of his rivals contending […]

PARIS (Reuters) – The European Union is heading this year towards a 5-10% economic contraction due to the new coronavirus outbreak, EU Industry Commissioner Thierry Breton said on Friday, adding that figure could get worse if “things don’t get better”. In an interview with France 2 television channel he also said he was optimistic about […]

An Iranian hacking group sanctioned by U.S. was itself the victim of a cyber attack

This is another News Portal > World News > As Teck oil sands mine hopes for okay from Canada’s Trudeau, 20 other projects on hold