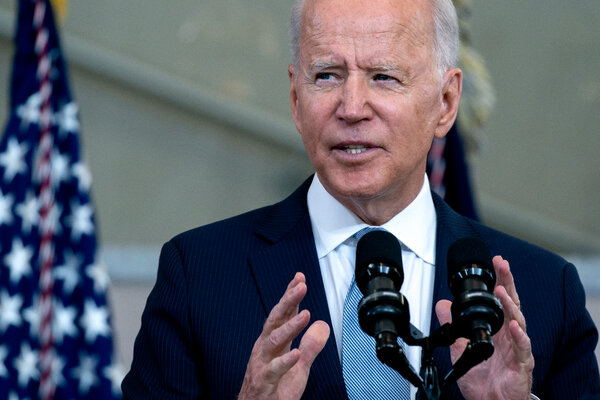 ‘Have you no shame?’

In an impassioned speech in Philadelphia, President Biden described the fight against restrictive voting laws as the “most significant test of our democracy since the Civil War,” and called Donald J. Trump’s efforts to overturn the 2020 election “a big lie.”

“Help prevent this concerted effort to undermine our election and the sacred right to vote,” the president said. “Have you no shame?”

The partisan fight over voting rights is playing out nationwide. About a dozen Republican-controlled states passed laws this spring that restrict voting or significantly change election rules. A group of Texas Democrats has fled to Washington in an effort to legally delay Republican state lawmakers’ effort to take up restrictive voting measures.

Analysis: Democratic leaders have no evident way to stop the Republican-backed laws — but the effect of those laws remains somewhat uncertain, David Leonhardt writes in The Morning newsletter.

In Washington: Two Democrat-led bills aimed at expanding voting rights nationwide are languishing in Congress. Biden has bucked increasing pressure from Democrats to endorse pushing the legislation through the Senate by eliminating the filibuster.

Republican response: In a statement, the communications director for the Republican National Committee said that the president’s speech had amounted to “lies and theatrics.”

Dozens of people have died in a blaze so intense that at least 22 bodies could not be immediately identified, after an electrical short caused oxygen canisters to explode at the Imam Hussein Teaching Hospital in the southern city of Nasiriya.

Witnesses described how fire trucks had run out of water and volunteers had desperately tried to pry open a padlocked door. People on ventilators could not move or leave, but staff members were able to escape. Most of the victims were patients.

The lack of precautions and the hospital’s feeble ability to fight the fire reflected a country in deep crisis. Years of corruption and government mismanagement have gutted basic government services across Iraq.

Government response: Iraq is battling a third wave of coronavirus infections, with more than 17,000 deaths since the pandemic began. After the fire, Prime Minister Mustafa al-Kadhimi ordered the detention of the provincial health director, the civil defense chief and the hospital director.

Background: In late April, more than 80 people died in a similar fire at a coronavirus hospital in Baghdad. Iraq’s health minister at the time resigned in response.

Indian officials are warning that the combination of an uneven virus response and a struggling vaccination campaign may bring about a third wave of infections.

More than 1.3 million people in France booked Covid vaccine appointments after President Emmanuel Macron mandated inoculation for health care workers and for those who want to enter restaurants and cultural venues.

As England prepares to fully reopen next week, Scotland’s first minister, Nicola Sturgeon, outlined more cautious plans for relaxing coronavirus rules and said masks would still be required for “some time to come.”

At around 1 a.m. on Tuesday, the Russian group REvil, which is short for “Ransomware Evil,” suddenly vanished from the dark web, just days after President Biden demanded that President Vladimir V. Putin of Russia shut down ransomware groups that have attacked American targets.

REvil is believed to be responsible for the attack that brought down one of America’s largest beef producers, JBS. The group also took credit for a hack that affected thousands of businesses around the world over the Fourth of July holiday.

While the disappearance of the hackers’ online presence was celebrated by many who see ransomware as a critical threat to national security, it left some of the group’s victims in the lurch, unable to pay the ransom to get their data back and get their businesses running again.

Three theories: The U.S. Cyber Command, working with domestic law enforcement agencies, could have brought down the group; Russia could have done so as well. Alternatively, REvil might have decided that the heat was too intense and taken itself down. Experts say the group could reappear under a different name.

European officials are planning aggressive new laws to phase out fossil fuels, which may include taxing imports deemed to be polluting and curbing the use of coal. Above, coal and wind power, in Mehrum, Germany, in August.

More than 77 percent of New Mexico is in severe drought, threatening a centuries-old irrigation network that is a cornerstone of regional agriculture. At least 67 U.S. weather stations have recorded their hottest temperatures in at least 75 years this summer, as heat waves and wildfires rage.

Heat and drought in the Western United States and Canada have killed hundreds of millions of marine animals and continue to threaten untold numbers of species in fresh water.

News From the Americas

Despite dozens of arrests at protests in Cuba on Sunday, dissidents expressed hope that the demonstrations would lead to change. A chant taken from a rap song has become the soundtrack to the protests.

The estimated death toll from a building collapse in Surfside, Fla. is now believed to be between 95 and 99.

Amid ongoing investigations, Haiti is planning a state funeral for President Jovenel Moïse. Our correspondent described the strange scene in Port-au-Prince, even as civic leaders hope for a better future beyond the turmoil.

A key measure of inflation in the U.S. jumped sharply in June: Prices rose by 5.4 percent, the biggest increase since 2008.

What Else Is Happening

South Africa deployed its military to quash violent protests over the imprisonment of Jacob Zuma, a former president.

Japan has warned that the military posturing by Beijing and Washington over Taiwan poses a threat to its security.

A fierce downpour dumped a month’s worth of rain on some parts of London, disrupting transportation and forcing some evacuations.

A mural of the English athlete Marcus Rashford was marred by racist slurs after England lost the European soccer championship to Italy.

But as news of the vandalism spread, one act of racism was met with hundreds of messages of pride and love. Within hours, a collage of hearts, England flags and letters addressed to Rashford covered the paper that had been used to hide the graffiti.

Snubs and surprises at the Emmys

In a year in which audiences stayed home and watched a lot of TV, the Television Academy rewarded streaming services in a big way in nominations for the 73rd Emmy Awards. Here’s the full list of nominees and a few shockers among the nominees.

A new playing field: The competition was more open than usual, because the pandemic pushed back new seasons of some of last year’s most nominated shows, like “Insecure,” “The Marvelous Mrs. Maisel” and “Succession.”

Decline of broadcast: Only one nominee for best comedy — ABC’s “Black-ish” — was from a cable or broadcast network, while the most nominated shows were all from streaming platforms: Netflix’s “The Crown,” which dominated the acting categories, and the Disney+ shows “The Mandalorian” and “WandaVision.”

A first: Mj Rodriguez of “Pose” became the first trans person to land a nomination in a lead acting category.

Critics weigh in: My colleagues James Poniewozik and Margaret Lyon discussed the oddly persistent acclaim for “Emily in Paris,” whether “Hamilton” really needs any more awards and a bit of justice for Michaela Coel’s powerful series “I May Destroy You.”

Something fresh, something flavorful and something in need of using up: Yotam Ottolenghi’s formula for bright, easy meals creates dishes like these turmeric fried eggs.

That’s it for today’s briefing. See you next time. — Natasha

The latest episode of “The Daily” is on Allen Weisselberg, the Trump Organization’s former chief financial officer, who has been charged with tax fraud.

You can reach Natasha and the team at briefing@nytimes.com.

Why is it so hard to end child marriage in America? In 1762, North Carolina’s colonial governor, Arthur Dobbs, married his second wife, 15-year-old Justina Davis. He was 73. It’s easy to feel some combination of revulsion for Mr. Dobbs, pity for Ms. Davis or, likely, a sense of relief that times have changed. Except […]

More from our inbox: To the Editor: Re “Threat of More Violence Weighs on Inauguration” (front page, Jan. 11): I am very concerned about the scheduled inauguration events in light of the recent attempted insurrection. President Trump’s recent tweet that he would not be at the inauguration may be interpreted as a message to his […]