Under billowing, cloudlike fabric stretching the length of a football field, fake lemon trees with purple-and-blue trunks sprout from AstroTurf. Lemon slices the size of cafe tabletops are scattered about like oversize stone pavers, and knee-high plants bear halves of the citrus fruit cast in fiberglass resin.

This Seussian wonder has a name: Citrovia. It has its own custom scent and special lighting effects. And, not surprisingly, it has its own hashtag.

The extravaganza could be a theme-park attraction. Instead, it’s part of an active construction site on a gritty stretch in Midtown Manhattan. 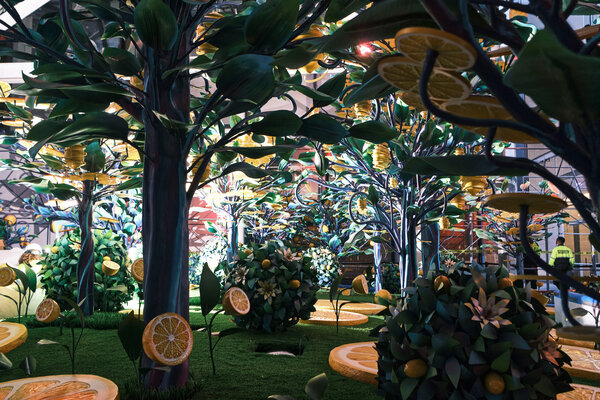 This garden of whimsy has sprung up under a construction shed at the base of an office tower being erected as part of a mixed-use development by Brookfield Properties known as Manhattan West. It is the latest, and likely most fantastical, attempt to transform the necessary evil of construction scaffolding, the system of pipes and planks that is supposed to protect passers-by from falling debris but almost always blights the area in the process.

“Construction sheds are a deterrent to pedestrian activity,” said Sara Fay, Brookfield’s senior vice president of marketing. “This was an opportunity to turn that on its head.”

The $13.7 billion scaffolding industry includes companies that produce, lease, install and remove the structures. Advances in recent years have made construction sites safer for workers, said DeAnna Martin, executive director of the Scaffold & Access Industry Association, a trade group. But for years, there have also been efforts to dress up construction scaffolding.

The metal poles have sometimes been painted custom colors, and artists have been hired to cover expanses of hunter-green wood with murals. In New York, where there are more than 8,900 sidewalk sheds, as they’re often called, stretching some 330 miles, a nonprofit organization has even emerged to connect artists and developers.

Building wraps, another safety measure, have been printed with artwork or even trompe l’oeil reproductions of the facades the netting conceals. Last year, a developer hung an enlargement of a New York Times guest essay by the comedian Jerry Seinfeld on a luxury condominium under construction on the Upper East Side of Manhattan.

But recent attempts to camouflage construction sites have gone 3-D, and redesigns of the scaffolding itself have gained traction. And it is perhaps not surprising that a utilitarian structure should be reimagined as an “experiential” installation, created for selfies and social media posts.

“It’s meant to be Instagrammed,” Ms. Fay said of Citrovia.

The skeletal structures are ubiquitous in New York, where, in addition to being required for new construction, they are installed for facade inspections that must be performed every five years under a city program. The program is intended to avert tragedies like the one in 1979 when a piece of falling masonry killed a Barnard College student or the 2019 death of an architect after debris from an unsafe facade tumbled down.

But many of the city’s sidewalk sheds are left up for years. Some building owners erect them and then leave them up as they put off repairs, all to the consternation of city residents who would prefer not to have to scurry through the dim, sometimes creepy spaces, and retailers whose storefronts are obscured by cross bracing.

The filmmaker John Wilson devoted a recent episode of his HBO comedy series to scaffolding, which grows “like a fungus,” he said.

And even the city acknowledges that sidewalk sheds, while necessary, are “not nice to look at,” said Andrew Rudansky, a spokesman for the Buildings Department.

Given the strong feelings on the subject, it’s no wonder that alternative designs have sprung up in New York. The firm Urban Umbrella has made a name for itself with its tall, elegant, vaguely Gothic scaffolding.

Despite being three or four times more expensive than standard scaffolding, which typically rents for $80 to $150 per linear foot, Urban Umbrella’s designs have been popular with customers concerned about keeping up appearances, like boutique shops and museums. The scaffolds can be outfitted with LED lights to brighten sidewalks, and fans to keep things cool in summer. Music can be piped in through Bluetooth speakers.

CookFox Architects took a different approach on a recent project, proposing permanent structures that would do away with the endless cycle of putting up and taking down sidewalk sheds. When DBI Projects, a consultant, organized a design competition for a master plan for Seward Park Cooperative, a residential complex on the Lower East Side, CookFox’s entry included curving canopies, topped by plants, providing shade and greenery while they performed their protective function.

In other cities, sidewalk sheds have taken different forms.

Shipping containers were recently pressed into service in Charlotte, N.C., by Portman Holdings, which is erecting a 16-story office building in the South End district, adjacent to a popular rail trail. To ensure that the public could continue to use the path, 11 of the steel containers, their ends removed, were placed in a row, creating a 440-foot tunnel.

Gensler, which designed the Portman building, specified the colorful patterns painted on the tunnel.

“Why do the wood fencing kind of thing?” asked John W. Gaulden, an architect and a co-managing director of Gensler’s Charlotte office.

That appears to be the same question Brookfield executives asked themselves when they were puzzling over how to address an inconvenient timing issue at Manhattan West.

The eight-acre development comprises office buildings, an apartment tower and a hotel, with a two-acre public plaza furnished with undulating benches that also serve as planters. The plaza is surrounded by retail and restaurant spaces on the lower floors, including an upcoming establishment from Danny Meyer’s Union Square Hospitality Group.

Manhattan West is set to officially open in the fall, but 2 Manhattan West, the 58-story tower under construction, is not expected to be completed until 2023. The solution was to paint the construction shed white and raise the roof to 40 feet, rather than the standard 12 to 15 feet, creating a 30,000-square-foot area that is airy enough to serve as a gathering space.

Initially, the developer planned to add just the cloudlike swaths of fabric to hide the shed’s corrugated ceiling. That gave rise to the idea of an entire landscape. The Cuttlefish, a firm with expertise in high-tech immersion experiences, was brought on for what its founder, Evan Schechtman, described on a recent tour of the site as a “shed décor project.”

Because no real plants could grow in the sun-starved planters, artificial ones had to be made. Brookfield and the Cuttlefish turned to Adirondack Studios, a fabrication firm that helped create “Star Wars” and “Frozen” attractions at Disney properties in Orlando, Fla.

Adirondack put sculptors, metalworkers, scenic artists and painters to work at its plant in Argyle, N.Y. The lemon trees, which stand up to 16½ feet tall, have a steel core covered in foam and are slathered with an epoxy. Leaves made out of a plastic composite were baked in an oven until pliable and then molded. All the lemons were painted by hand.

A perfumer whose clients include Cadillac and the Ritz-Carlton conjured up the citrus scent, which will waft about the area, thanks to five diffusers on timers. This will mean passers-by might smell Citrovia before they see it.

Lights will mimic sunrise and sunset in the artificial landscape. “Imagine on a rainy day, it’s a beautiful blue sky,” Mr. Schechtman said.

Brookfield had never tried such an over-the-top construction installation, said a company spokeswoman, who would not reveal the project’s cost.

The developer is hoping visitors will snap selfies in front of a six-foot lemon sliced in half overlooking Ninth Avenue. Children are welcome, too. QR codes sprinkled throughout the setting will provide access to a virtual world populated by cartoon characters named Easy, Peasy and, yes, Lemon Squeezy.

“Citrovia is not meant to be taken too seriously,” Ms. Fay said. “It’s meant to be fun and lighthearted.”

(Reuters) – U.S.-based Ares Management plans to buy 60% of the private markets business of AMP Ltd’s asset management arm for A$1.35 billion ($1.06 billion), the pair said on Friday, weeks after scrapping a bid for all of the Australian company.FILE PHOTO: The logo of AMP Ltd, Australia’s biggest retail wealth manager, adorns their head […]

As the cost of building houses increases, some say it’s time to change our construction methods. Property editor Anne Gibson examines the arguments for and against prefabricated and tiny homes. Prefabricated, modular, kitset, transportable, container, tiny – whatever the name, some people hope a new style of building could revolutionise the sector, help ease our […]

This is another News Portal > World News > Exclusive: SoftBank leads latest Alto Pharmacy funding round at over $1 billion valuation