STARR SCHOOL, Mont. — One week before the 2020 election, Laura Roundine had emergency open-heart surgery. She returned to her home on the Blackfeet Indian Reservation with blunt instructions: Don’t go anywhere while you recover, because if you get Covid-19, you’ll probably die.

That meant Ms. Roundine, 59, couldn’t vote in person as planned. Neither could her husband, lest he risk bringing the virus home. It wasn’t safe to go to the post office to vote by mail, and there is no home delivery here in Starr School — or on much of the reservation in northwestern Montana.

The couple’s saving grace was Renee LaPlant, a Blackfeet community organizer for the Native American advocacy group Western Native Voice, who ensured that their votes would count by shuttling applications and ballots back and forth between their home and a satellite election office in Browning, one of two on the roughly 2,300-square-mile reservation.

But under H.B. 530, a law passed this spring by the Republican-controlled State Legislature, that would not have been allowed. Western Native Voice pays its organizers, and paid ballot collection is now banned.

“It’s taking their rights from them, and they still have the right to vote,” Ms. Roundine said of fellow Blackfeet voters who can’t leave their homes. “I wouldn’t have wanted that to be taken from me.”

The ballot collection law is part of a nationwide push by Republican state legislators to rewrite election rules, and is similar to an Arizona law that the Supreme Court upheld on Thursday. In Montana — where Gov. Greg Gianforte, a Republican, was elected in November to replace Steve Bullock, a Democrat who had held veto power for eight years — the effects of that and a separate law eliminating same-day voter registration are likely to fall heavily on Native Americans, who make up about 7 percent of the state’s population. 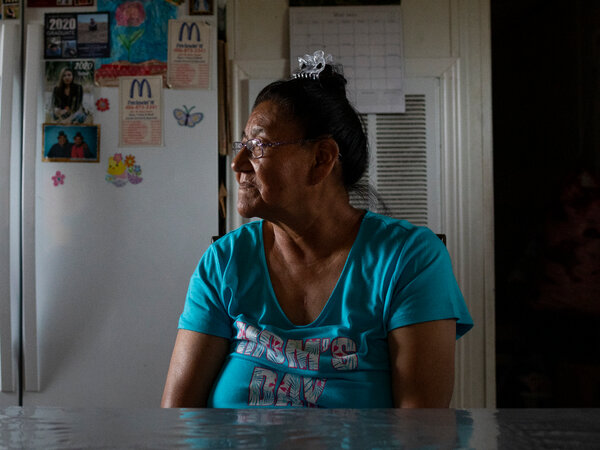 It has been less than a century since Native Americans in the United States gained the right to vote by law, and they never attained the ability to do so easily in practice. New restrictions — ballot collection bans, earlier registration deadlines, stricter voter ID laws and more — are likely to make it harder, and the starkest consequences may be seen in places like Montana: sprawling, sparsely populated Western and Great Plains states where Native Americans have a history of playing decisive roles in close elections.

In 2018, Senator Jon Tester, a Democrat, won seven of eight Montana counties containing the headquarters of a federally recognized tribe and received 50.3 percent of the vote statewide, a result without which his party would not currently control the Senate. (One of the eight tribes wasn’t federally recognized at the time but is now.) In 2016, Mr. Bullock carried the same counties and won with 50.2 percent. Both times, Glacier County, which contains the bulk of the Blackfeet reservation, was the most Democratic in the state.

In recent years, Republicans in several states have passed laws imposing requirements that Native Americans are disproportionately unlikely to meet or targeting voting methods they are disproportionately likely to use, such as ballot collection, which is common in communities where transportation and other infrastructure are limited. They say ballot collection can enable election fraud or allow advocacy groups to influence votes, though there is no evidence of widespread fraud.

On the floor of the Montana House in April, in response to criticism of H.B. 530’s effects on Native Americans who rely on paid ballot collection, the bill’s primary sponsor, State Representative Wendy McKamey, said, “There are going to be habits that are going to have to change because we need to keep our security at the utmost.” She argued that the bill would keep voting as “uninfluenced by monies as possible.”

Ms. McKamey did not respond to requests for comment for this article.

Geography, poverty and politics all create obstacles for Native Americans. The Blackfeet reservation is roughly the size of Delaware but had only two election offices and four ballot drop-off locations last year, one of which was listed as open for just 14 hours over two days. Many other reservations in Montana have no polling places, meaning residents must go to the county seat to vote, and many don’t have cars or can’t afford to take time off.

Advocacy groups like Western Native Voice have become central to get-out-the-vote efforts, to the point that the Blackfeet government’s website directs voters who need help not to a tribal office but to W.N.V.

Ms. LaPlant, who was one of about a dozen Western Native Voice organizers on the Blackfeet reservation last year, said she couldn’t begin to estimate how far they had collectively driven. One organizer alone logged 700 miles.

One of the voters the team helped was Heidi Bull Calf, whose 19-year-old son has a congenital heart defect. Knowing the danger he would be in if he got Covid-19, she and her family barely left their home in Browning for a year.

Asked whether there was any way she could have returned her ballot on her own without putting her son’s health at risk, Ms. Bull Calf, the director of after-school programs at an elementary school, said no.

The ballot collection law says that “for the purposes of enhancing election security, a person may not provide or offer to provide, and a person may not accept, a pecuniary benefit in exchange for distributing, ordering, requesting, collecting or delivering ballots.” Government entities, election administrators, mail carriers and a few others are exempt, but advocacy groups aren’t. Violators will be fined $100 per ballot.

In May, the American Civil Liberties Union and the Native American Rights Fund sued the Montana secretary of state, Christi Jacobsen, a Republican, over the new laws. The lawsuit alleges that the ballot collection limits and the elimination of same-day voter registration violate the Montana Constitution and are “part of a broader scheme” to disenfranchise Native voters. It was filed in a state district court that struck down a farther-reaching ballot collection ban as discriminatory last year.

A spokesman for Ms. Jacobsen did not respond to requests for comment. In a statement shortly after the lawsuit was filed, Ms. Jacobsen said, “The voters of Montana spoke when they elected a secretary of state that promised improved election integrity with voter ID and voter registration deadlines, and we will work hard to defend those measures.”

The state-level legal process may be Native Americans’ only realistic recourse now, because on Thursday, the Supreme Court upheld a ballot collection law in Arizona, signaling that federal challenges to voting restrictions based on disparate impact on voters of color were unlikely to succeed.

On the Crow and Northern Cheyenne Reservations, many residents have no internet. Often, the only way to register to vote is in person at election offices in Hardin and Forsyth, 60 miles or more one way from parts of the reservations.

The Battle Over Voting Rights

After former President Donald J. Trump returned in recent months to making false claims that the 2020 election was stolen from him, Republican lawmakers in many states have marched ahead to pass laws making it harder to vote and change how elections are run, frustrating Democrats and even some election officials in their own party.

Number 10 has apologised to the Queen over two parties held in Downing Street on the eve of Prince Philip’s funeral. The prime minister’s spokesperson said it was “deeply regrettable that this took place at a time of national mourning”. The events on 16 April 2021 – which according to the original report in The […]

Eugenio Martinez, Last of the Watergate Burglars, Dies at 98

Eugenio Martinez, the last surviving Watergate burglar and the only figure in the scandal besides Richard M. Nixon to be granted a presidential pardon, died on Saturday in Minneola, Fla. He was 98. His death, at his daughter’s home near Orlando, was announced by Brigade 2506, a veterans group of Mr. Martinez’s fellow anti-Communist Cuban […]

Rishi Sunak's campaign video criticised by Andrew Neil We use your sign-up to provide content in ways you’ve consented to and to improve our understanding of you. This may include adverts from us and 3rd parties based on our understanding. You can unsubscribe at any time. More info The politician locked horns with the host […]

Kate pregnancy rumours shut down as ‘absence’ is explained by expert

Harry would have been ‘sad’ at seeing Kate’s engagement on birthday, expert says