Hurricane Elsa is the first hurricane of the 2021 Atlantic hurricane season. It is the earliest fifth-named storm on record and is forecast to unleash up to 15 inches of rainfall across parts of southern Hispaniola and Jamaica in the coming days. But what does the latest NOAA report reveal about the storm?

Hurricane Elsa is headed to Haiti amid fears of floods and landslides.

The Category 1 storm has already torn the roofs off buildings, destroyed crops and downed trees and power lines across areas of eastern Caribbean.

Parts of Barbados, Saint Lucia and St Vincent and the Grenadines are struggling to recover in the wake of the storm – in addition to massive volcanic eruptions which caused damage in April.

Elsa is now racing towards Haiti and the Dominican Republic, with storm forecasts predicting it to move on towards Florida in the coming days. 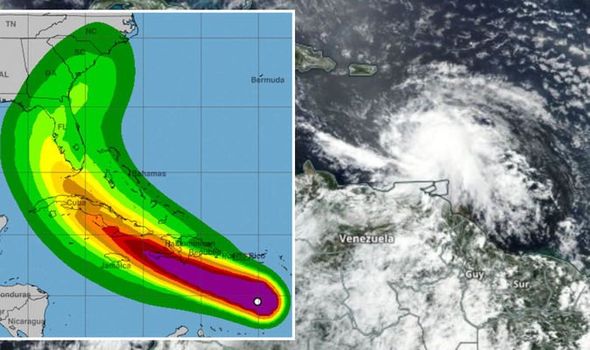 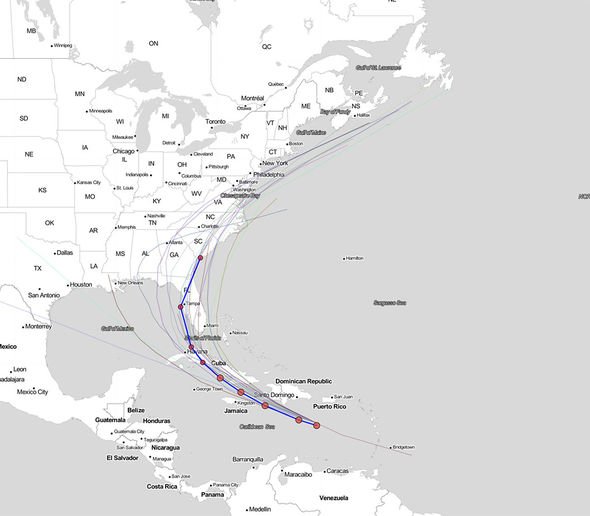 The US National Hurricane Center (NHC) is currently tracking Hurricane Elsa as it moves across the Eastern Caribbean Sea.

Hurricane conditions are expected to begin later on Saturday, July 3, in portions of Hispaniola.

The Category 1 storm was packing maximum sustained winds of 75mph and moving at 31mph in a west-northwest direction. 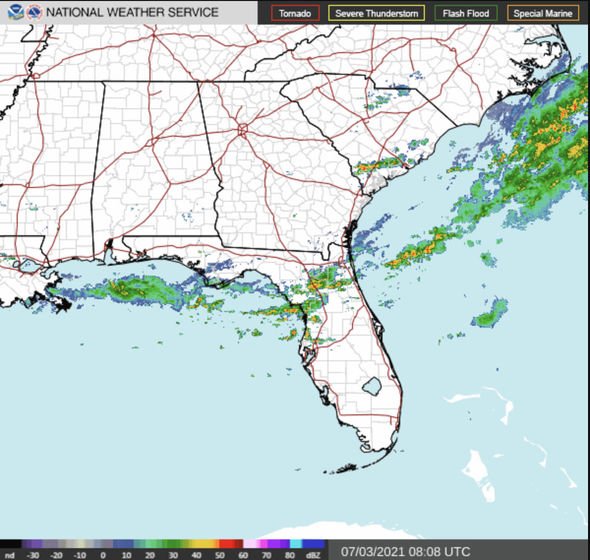 The latest report from the National Oceanic and Atmospheric Administration (NOAA) reads: “Elsa is moving very quickly toward the west-northwest near 31 mph (50 km/h).

“A decrease in forward speed is expected later today and Sunday, followed by a turn toward the northwest Sunday night or Monday.

“On the forecast track, Elsa will move near the southern coast of Hispaniola later today and tonight, and move near Jamaica and portions of eastern Cuba on Sunday.

“By Monday, Elsa is expected to move across central and western Cuba and head toward the Florida Straits.”

The report adds: “Little change in strength is expected today, but slow weakening is forecast on Sunday and Monday when Elsa is expected to be near or over Cuba.” 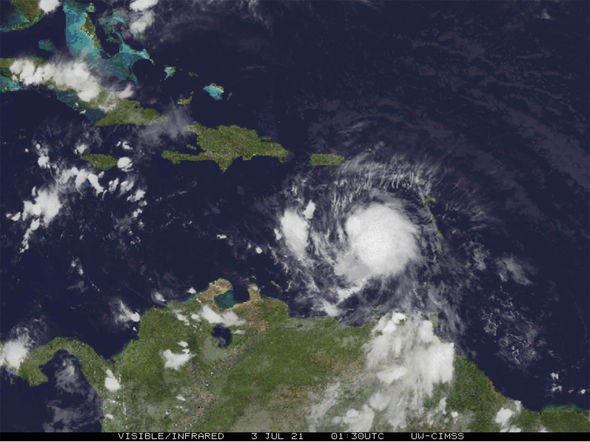 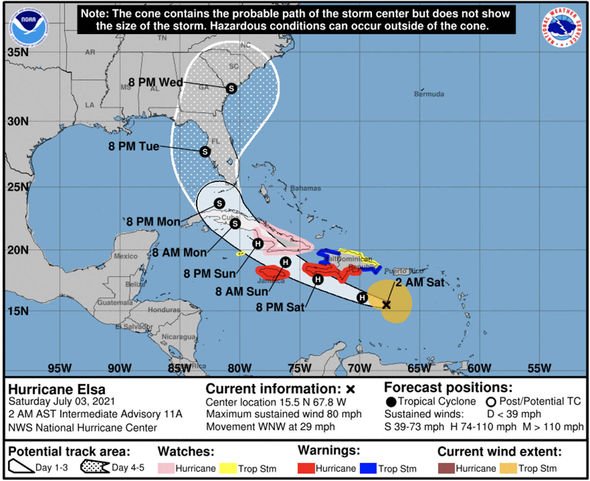 Hurricane conditions and dangerous storm surge are expected in regions of Haiti and the Dominican Republic on Saturday and in Jamaica from Sunday.

Outer rain bands from Elsa will impact Puerto Rico from Saturday night, with widespread heavy rain moving into southern Hispaniola and Jamaica on Saturday through to Sunday.

Isolated to scattered flash flooding and mudslides are possible in the region.

Torrential downpours are forecast to impact the Cayman Islands and Cuba through early next week, which could result in significant flooding and mudslides across Cuba. 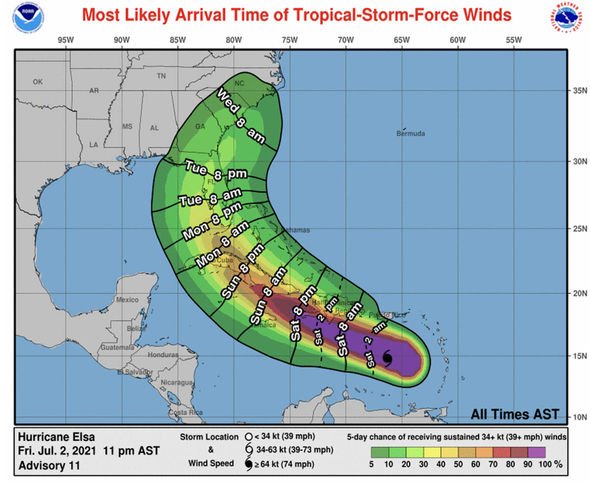 There is an increasing risk of storm surge, wind and rainfall impacts beginning on Monday in the Florida Keys region.

These severe weather events are likely to spread northwards along the Florida Peninsula on Tuesday.

The latest update from the Meteorological Service Division in Jamaica said the storm will continue its slow strengthening while approaching the central Caribbean.

The warning advised dangerous hurricane effects are expected to affect Jamaica for the next 26 hours or less.

A tropical storm warning is in effect for the coast of Haiti north of Port Au Prince and the south coast of the Dominican Republic east of Punta Palenque to Cabo Engano.

A hurricane watch is in effect for the Cuban provinces of Camaguey, Granma, Guantanamo, Holguin, Las Tunas and Santiago de Cuba.

A tropical storm watch is in effect for the north coast of the Dominican Republic from Cabo Engano to Bahia de Manzanillo, Cayman Brac and Little Cayman.

If Apple is hurting due to the coronavirus, its suppliers and rivals likely are too

By Stephen Nellis and Josh Horwitz SAN FRANCISCO/SHANGHAI (Reuters) – Apple Inc’s <AAPL.O> surprise warning that it will likely fall short of this quarter’s sales target due to the coronavirus epidemic points to much pain for its chip and other suppliers as well as for rivals who also rely on China to build their products. […]

LONDON (Reuters) – British insurer and asset manager M&G <MNG.L> will continue the suspension of its 2.5 billion pound ($3.30 billion) property funds, it said on Thursday, after selling 70.4 million pounds of real estate assets to raise cash. M&G said on Dec. 4 that it was freezing the M&G Property Portfolio and its feeder […]

(Reuters) – 1/OIL BACK ON THE BOIL Geopolitics is back in the driving seat. The U.S. killing of a top Iranian commander has doused the nascent New Year rally and delivered a $3 boost for oil prices on fears that any violent retaliation from Tehran would disrupt energy supplies. Brent crude futures <LCOc1> have actually […]

ECB’s Lagarde: let’s not get fixated on coronabonds

Brexit: British expats on Costa del Sol ‘selling up’ as they ‘don’t want this restriction’

This is another News Portal > World News > Brexit: British expats on Costa del Sol ‘selling up’ as they ‘don’t want this restriction’