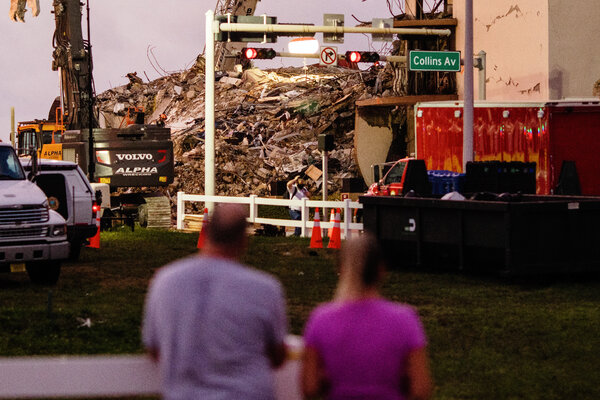 On Sunday, four days after a residential building north of Miami Beach collapsed, the death toll rose to nine as rescuers found additional bodies and remains. More than 150 people are still missing. Here are live updates and what we know so far.

The search has been painstakingly slow: Fire beneath the rubble has hampered efforts and some families are beginning to lose hope. The missing people had roots across the world.

The collapsed building, which was in Surfside, Fla., was about to undergo repairs to fix “major structural problems” that an engineer had identified in 2018.

Next door: Residents of a sister tower are stuck in limbo. No one has ordered them to evacuate yet, but each new crack brings fear and confusion. Some are confident; others hastily packed bags and found other places to sleep.

Safety check: The collapse has raised questions about the safety of similar buildings along South Florida’s beaches, where salt air tends to eat away at steel and concrete structures. On Saturday, the mayor of Miami-Dade County announced a 30-day audit of all buildings that are 40 years and older.

A global problem: Around the world, sloppy construction, poor maintenance or shoddy materials often cause buildings to collapse. But the bigger problem is weak, uneven or nonexistent oversight.

As the Delta variant spreads through Australia’s biggest city, officials put into effect a strict two-week lockdown that began on Saturday for all of greater Sydney and its surrounding regions. It is the first such lockdown since early 2020 and reflects the rise in concern about the rapidly-growing outbreak.

A cluster that began with an airport limousine driver has jumped to nearly 100 cases, with dozens more expected over the coming days. Officials also worry about a hair salon that had 900 clients while at least a few employees were infectious, and a seafood wholesaler where a delivery driver tested positive after several days of transporting fish across the city.

Officials, who initially resisted such strong measures, said they were now necessary after several new chains of transmission were found. Until at least July 9, people across Sydney can leave their homes only to exercise, seek medical attention, care for loved ones, buy food or carry out other essential activities.

Vaccines: Australia is one of many countries throughout the Asia-Pacific region that continue to struggle with the ups and downs of the coronavirus, mainly because of new variants and a slow rollout of vaccines. Most people in Sydney are unvaccinated. Fewer than a quarter of Australians have received at least one dose, according to New York Times data.

Dozens of climbers on Mount Everest have given firsthand accounts of being infected with the coronavirus, but Nepal refuses to acknowledge any cases.

Indonesian doctors, who got the Chinese-made Sinovac shots, are still getting sick.

Indian doctors worry about a new version of the virus: Delta Plus.

The pope and L.G.B.T.Q. rights

Pope Francis sent a deeply encouraging handwritten letter to a leader in the Roman Catholic Church’s effort to reach out to L.G.B.T.Q. people. But a growing dissonance has developed between his inclusive language and the church’s actions.

This past week, the Vatican confirmed that it had grave concerns about legislation currently in the Italian Parliament that increases protections for L.G.B.T.Q. people. Days later, the second in command insisted the church had nothing against gay rights, but was protecting itself from possible discrimination charges stemming from the new bill.

Francis’s note adds to the political confusion over whether he is a liberal trying to reform the church or just a social conservative trying to please everyone, our Rome bureau chief writes.

Background: Francis has appeared open to homosexuality: In 2016, he famously responded, “Who am I to judge?” on the issue of gay Catholics and recently, he has expressed support for same-sex civil unions. But in March, the church’s top doctrinal office — with Francis’s support — denied Catholic clergy the authority to bless gay unions.

A Frenchwoman who killed her abusive husband will go free after serving one year in prison, a decision that could set a precedent for domestic violence cases.

The trial of two prominent figures in Jordan accused of plotting to destabilize the kingdom has become a showcase of regional rivalries in the Middle East.

Three aid workers for Doctors Without Borders were found dead in the Tigray region of Ethiopia.

What Else Is Happening

Serena Williams, a four-time gold medalist, indicated that she would not play in the Tokyo Olympics next month. If you’re looking for some names to root for (or against) in Tokyo, here are a few to start with.

A UNESCO plan to restore Mosul after years of battling the Islamic State has drawn criticism from prominent Iraqi architects.

Native Americans, who were forced onto marginal land, now bear an undue burden from climate change.

Chinese tourists are flocking to attractions to take in the official version of the history of the Communist Party ahead of its July 1 centennial. This wave of “red tourism” — in which old tour sites have been jazzed up for the era of Instagram and TikTok — presents a sanitized, sometimes misleading, narrative.

Could this meeting have been an email?

People have been holding meetings for thousands of years. Ancient Egyptians had hieroglyphs to convey the concept of “council.” George Washington, sick of writing letters, convened the founders in his study to help set up the U.S. government, Caity Weaver writes in The Times.

Over the course of the pandemic, in-person meetings have shifted to online ones. But they were almost never without technical difficulties, and many people found them wanting.

So, Caity asks, what do we miss when we don’t meet in person?

With their emphasis on collaboration, meetings can “play a psychological role in motivating the work force,” Caitlin Rosenthal, an economic historian, said.

Avoiding a bad meeting requires a purpose, a mixture of introverts and extroverts and — ideally — designated decision makers. As Caity writes, “A meeting can be good, in short — but only if it needs to be a meeting.”

For more: Do chance encounters at the office actually increase innovation?

This tuna salad sandwich has both the tang of pickles and the crunch of chips. Serve it with vegetable tabbouleh.

Vin Diesel returns to lead his fast and furious family on another dangerous mission in “F9: The Fast Saga.” Ticket sales are up, as crowds return to theaters.

Get to know the 2,190 miles of the Appalachian Trail in Philip D’Anieri’s new biography of the famed footpath.

Here is today’s Mini Crossword, and a clue: Go to the beach without sunscreen, say (three letters). The Book Review also has its own special crossword, a celebration of 125 years of criticism and reviews.

You can find all of our puzzles here.

That’s it for today’s briefing. See you next time. — Amelia

P.S. Ryan Mac, formerly of BuzzFeed and Forbes, is joining The Times to report on tech accountability.

There’s no new episode of “The Daily” today. Instead, listen to “Day X” on the far-right in Germany.

Claire Moses wrote the Arts and Ideas section. You can reach Amelia and the team at briefing@nytimes.com.

Opinion | Where Is the Smithsonian Museum for American Latinos?

Our stories still don’t have a permanent home in our nation’s capital. By Ileana Ros-Lehtinen and Ken Salazar Ms. Ros-Lehtinen and Mr. Salazar are advocates for the National Museum of the American Latino Act in the House of Representatives. The National Mall in Washington is where we inaugurate presidents, march for change and learn about […]

Opinion | American Academia: The Traditional and the Upstarts

Send any friend a story As a subscriber, you have 10 gift articles to give each month. Anyone can read what you share. More from our inbox: To the Editor: In “Why We Need New Colleges” (column, Nov. 11), Ross Douthat indulges in some of the usual caricatures of “elite academia,” with loose talk of […]

Opinion | Taking the Fight for Safe, Legal Abortion to the States

Send any friend a story As a subscriber, you have 10 gift articles to give each month. Anyone can read what you share. By Gretchen Whitmer Ms. Whitmer is the governor of Michigan. As I read the U.S. Supreme Court’s draft opinion overturning Roe v. Wade, I was devastated. It was shocking to see, laid […]

Brexit: Major new change for millions of EE customers from TODAY – how to avoid

U.S. economic shutdown may be too tight for ‘optimal’ outcome: Minneapolis Fed research