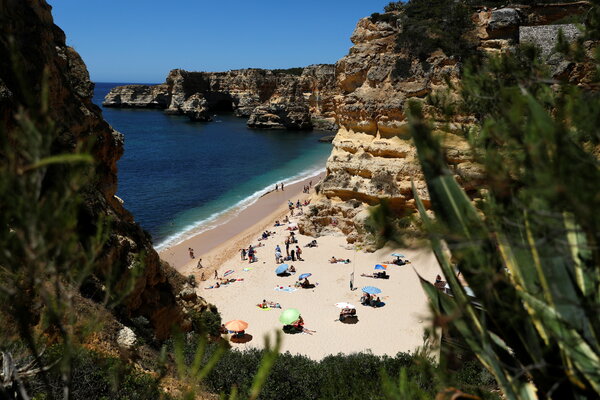 The European Center for Disease Prevention and Control has called for all E.U. residents to be fully vaccinated against the coronavirus as quickly as possible this summer, as concerns grow that the contagious Delta variant will sweep across the bloc.

Though preliminary data show that the variant can infect partly vaccinated people, it is unlikely to pose much risk to those who have been fully vaccinated, particularly those who have received two doses of the Pfizer-BioNTech vaccine, experts said.

After a sluggish start, the E.U. has ramped up vaccine distribution, though about 30 percent of people over 80 and around 40 percent of those over 60 have yet to be fully vaccinated. Most E.U. countries have not yet fully vaccinated even one-third of their total populations: The average is about 27 percent.

Rooting through Google Cloud files, a virologist in Seattle recovered 13 original coronavirus sequences that disappeared from a database last year. The sequences offer new information for understanding the virus’s origins and raise questions about why the sequences were deleted.

The Pfizer and Moderna vaccines may cause cardiac inflammation in very rare instances, the C.D.C. said, but most cases are mild.

Asking people if they’ve had a Covid shot can be tricky. Here’s how to navigate the new norms of health disclosure.

Tong Ying-kit yesterday became the first person to stand trial in Hong Kong under the new national security law, after he flew a protest flag while driving a motorcycle and crashed into several riot police officers as they tried to stop him. Mr. Tong, 23, faces life in prison if convicted.

More than 100 people in Hong Kong have been arrested under the sweeping new rules. Mr. Tong’s case is a test of how the city’s judicial system, based on British common-law principles of fairness and independence, will interpret and enforce Beijing’s far-reaching security law.

A deadly airstrike in Ethiopia

Dozens of people were killed on Tuesday when a government airstrike slammed into a busy market in northern Ethiopia, medics and witnesses said, as fighting intensified in the restive Tigray region.

In what appeared to be one of the deadliest single episodes of the eight-month civil war, 80 people were killed and 43 others wounded in the attack on the town of Togoga, according to a private report that was shared by a U.N. official in Ethiopia.

Yesterday, Tigrayan rebels struck back when fighters shot down an Ethiopian Air Forces C-130 transport plane, causing it to smash into a field about 15 miles south of the city of Mekelle, according to the rebels and witnesses.

Context: The attack pointed to an intensifying fight in Tigray, where fighters led by Ethiopia’s one-time ruling party, the Tigray People’s Liberation Front, captured areas that until recently were controlled by soldiers from Eritrea. The rebels say they have captured several thousand Ethiopian soldiers and were holding them as prisoners of war.

News From the U.S.

“I truly believe this conservatorship is abusive. I don’t feel like I can live a full life”: In a bombshell 23-minute speech, Britney Spears urged a Los Angeles judge to end the legal conservatorship arrangement that controls her life. Read highlights here.

Warren Buffett resigned as a trustee of the Bill and Melinda Gates Foundation, weeks after the couple’s divorce. He did not give a reason.

The Supreme Court ruled in favor of a Pennsylvania cheerleader who was punished by her high school district over a vulgar Snapchat message. The court found that the district violated the First Amendment by disciplining Brandi Levy for off-campus speech.

The Russian Defense Ministry said that one of its ships fired warning shots at a British destroyer and that a Russian jet dropped bombs in the destroyer’s path after it entered Russian waters near Crimea. Britain denied the claims.

John McAfee, the antivirus software pioneer, died in a Spanish prison yesterday in what the Spanish authorities called a probable suicide. He was set to be extradited to the U.S. to face tax-evasion charges.

Twin pandas were born at a zoo in Tokyo. Nearly four years had passed since Ri Ri, a 15-year-old male, last mated with his partner, Shin Shin, also 15.

“The Night Watch,” by Rembrandt, has been painstakingly reassembled using scanning technologies and a relatively new class of artificial-intelligence algorithms, after sections were cut off in the 18th century and lost.

The Hôtel de la Marine, the eagerly awaited new Paris museum, is open to the public for the first time in almost 250 years after a $157 million, four-year renovation.

Disneyland Paris has reopened, raising hopes that Europe's most popular theme park will kick-start a tourism recovery in France.

China is using thousands of seemingly unfiltered videos, in which Chinese citizens deny abuses in Xinjiang, to spread its propaganda version of life in the region, where the Communist Party has carried out repressive policies against Uyghurs. Above, a screen shot from one video.

In a monthslong analysis of more than 3,000 videos, The Times and ProPublica found evidence of one of China’s most elaborate efforts to shape global opinion — and how Western internet platforms serve as high-speed propaganda pipelines for Beijing.

For years, Nigeria’s artists, historians, activists and royals have been clamoring to get back the stolen Benin Bronzes — more than 3,000 works, many of them religious objects, looted by British soldiers in 1897 and now held in the collections of some of the most important museums in the U.S. and Europe.

As conversations about racism and the legacy of colonialism have proliferated globally in recent years, some institutions are beginning to respond to these calls, write our reporters Ruth Maclean and Alex Marshall.

In April, Germany said it would return a “substantial” number of Benin Bronzes next year. The National Museum of Ireland plans to return 21 objects, as well. But they are outliers. The British Museum previously floated the idea of loans, but never full restitution, and the Metropolitan Museum of Art in New York is not considering sending its treasured Queen Idia mask back, said a spokesman.

To many Nigerians, the stolen works are not just physical objects of art, but also narratives. They form part of the bedrock of the identity, culture and history of Benin — the city in Nigeria that was once part of the Kingdom of Benin, not the modern nation Benin.

“They were made to tell stories, to keep memories,” said Enotie Ogbebor, an artist from Benin City. Western institutions had turned these pieces into “objects of admiration, when these were objects holding information,” he added.

These Danish raspberry slices — known locally as hindbaersnitter — are as pretty as a picture and a joy to make and eat.

Three sci-fi indies and a clever rom-com are among this month’s hidden streaming gems.

If you’re splitting your work hours between home and the office, you should be using the right tools for each situation. Here’s a guide to tech in the hybrid workplace.

Here’s today’s Mini Crossword, and a clue: What dogs, frogs and hogs all do? (five letters).

That’s it for today’s briefing. See you tomorrow. — Natasha

P.S. The word “pseudonormalcy” — from an Opinion essay about pandemic reopenings — appeared for the first time in The Times this week.

The latest episode of “The Daily” is about the failure of a voting rights bill in the U.S.

You can reach Natasha and the team at briefing@nytimes.com.

Opinion | How Identity Politics Took Over the Republican Party

Produced by ‘The Ezra Klein Show’ One problem with the conversation around political polarization is that it can imply that polarization is a static, singular thing. That our divisions are fixed and unchanging. But that’s not how it is at all. The dimensions of conflict change, and they change quickly. In the Obama era, Republicans […]

Readers say it has always been a matter of human rights, not politics, and highlight the continuing problem of Turkish intimidation. To the Editor: Re “Biden Recognizes Ottoman-Era Massacre of Armenians as Genocide” (news article, April 25): I am a first-generation Armenian-American and grandson of survivors of the Armenian genocide. President Biden’s recognition of mass […]