WhatsApp is the third Facebook app to welcome the shopping service after Instagram and the main parent platform. The latter will also expand the commerce initiative to its own Facebook Marketplace.

The messaging app has primarily been a communications or customer-service platform for retailers. But Facebook has been steadily developing its commerce features, thanks to catalogues and shopping carts. Now the latest news turns the app into a legitimate shopping channel. Facebook plans to launch WhatsApp Shops across several countries “soon.”

As for Marketplace, Shops inventory is currently available in the U.S. for Shops with on-site checkout, according to the company.

The company is also working on an artificial intelligence-driven visual search tool. Pinterest, Google and other platforms have been honing visual search for years, and now Facebook intends to bring it to Instagram. 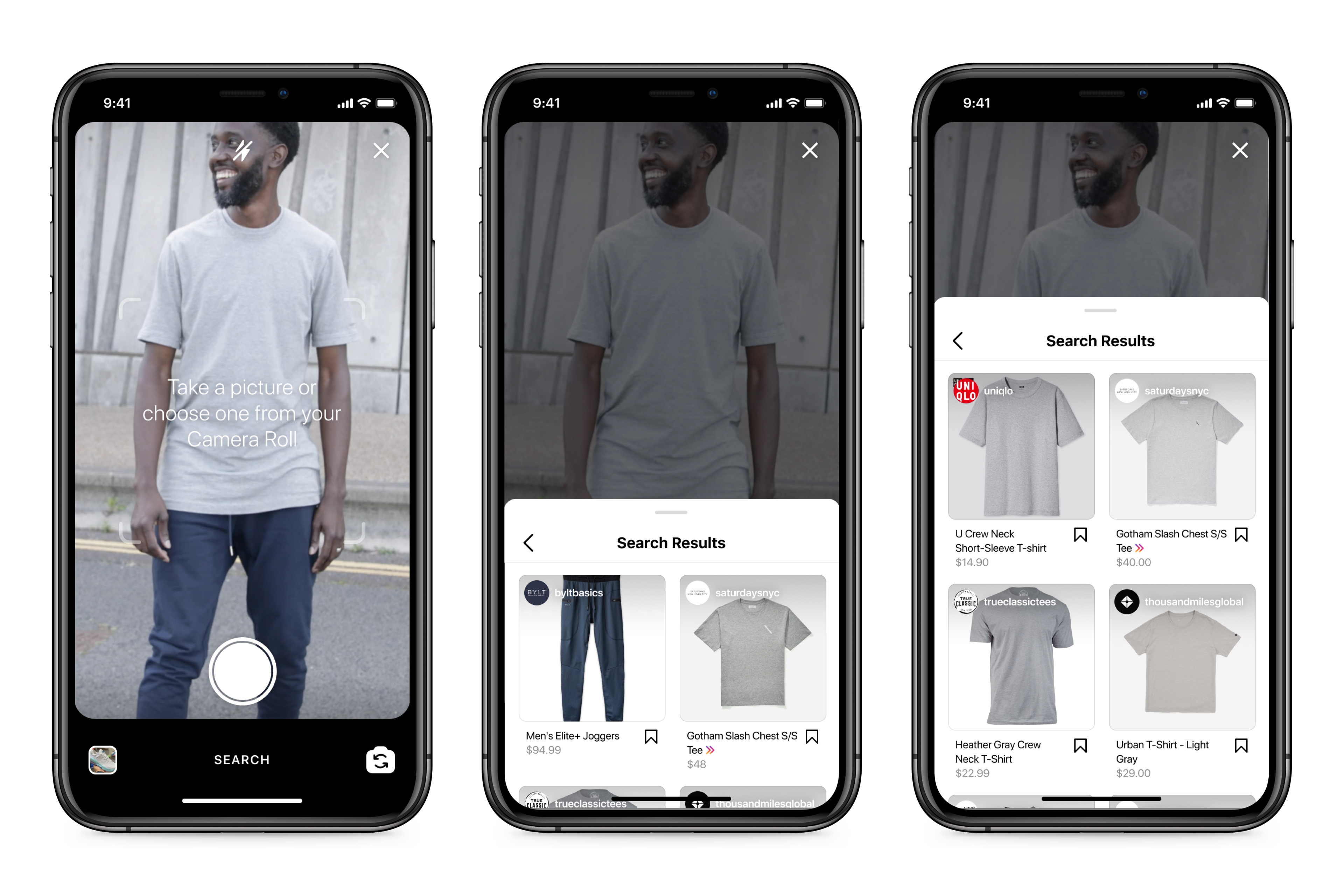 Visual search will head into testing soon, with the ultimate destination planned for Instagram. Courtesy image

“A lot of shopping discovery begins with visual discovery, right, so you see something that you think is awesome. And then, you know, maybe you want to see other products that are like that, or you want to figure out how to get that product. And this is the type of problem that AI can really help out with,” Zuckerberg explained, adding that visual search will begin testing in the coming months in the U.S.

Another priority is augmented reality product try-ons, an effort that got underway in earnest at the company when its Spark AR camera effects platform opened up in 2019 and has been available to advertisers in the U.S. for products like shoes and makeup.

Now the company wants to double down on its AR Dynamic Ads to bring more partners into the fold. The expansion starts with Instagram, followed by the main Facebook platform.

Even before the pandemic ramped up, in early 2020, the company told WWD that nearly a quarter of Instagram users proceeded to virtually try on products whenever that was an option. Since then, as COVID-19 drove the mass suspension of physical retail, online shopping has vaulted into the stratosphere and triggered something of an innovation race to boost shopping features, like AR.

The tech works well for “hard” goods, such as furniture, footwear and bags, as well as cosmetics and hair color. But fashion has had a notoriously difficult time adopting it. Although there have been impressive gains in virtual fabrics development — which involves gravity, texture and understanding how different textiles move or drape — pulling off a believable AR filter for a garment can venture into the challenging and data-driven area of remote fitting.

Last month, Snapchat, an early entrant in shopping AR, unveiled its first major foray into virtual fashion try-ons, thanks to its work with cloth simulation and 3D body mesh technology, which can map the body and its movements. With launch partner Farfetch on board, the rival platform said that Virgil Abloh fans would be able to try on a selection of jackets and windbreakers.

But it acknowledged that this was just the beginning, and there’s much more work to do.

Whether or not Facebook will venture into the complicated matrix of virtual fashion try-ons remains to be seen, but that could be an important slice of a very broad pie.

Today, across Facebook platforms, there are 1.2 million monthly active Shops and shoppers number more than 300 million a month.

AMSTERDAM (Reuters) – Dutch bank ABN Amro (ABNd.AS) on Friday said it had commissioned a study into its past in light of the current global debate about systemic racism and the inequality faced by Black people. “As a bank with a history going back 300 years, ABN Amro too is aware that there may be […]

How a Buzzy Cryptocurrency Fizzled

A crypto superstar crashes hard The “Internet Computer” is an ambitious crypto project by the Dfinity Foundation, a Swiss nonprofit organization with big Silicon Valley backers like Andreessen Horowitz. Last month, it was the darling of the crypto world when it held a bonanza of an initial coin offering, valuing its token, known as ICP, […]

S&P dips on worries about earnings, data, stimulus and election

(Reuters) – The S&P 500 and Dow closed lower on Thursday after data painted a worrying economic picture on a crucial day for corporate earnings reports, while President Donald Trump exacerbated investor nervousness by floating the possibility of delaying the U.S. presidential election. The main earnings focus on Thursday was on reports from high-flyers including […]