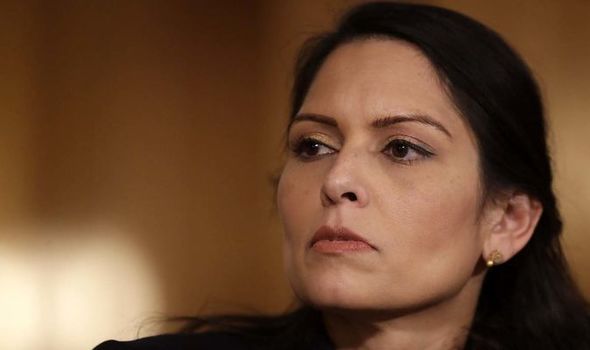 The Home Secretary, in a stinging letter sent to every chief constable, said forces must reverse historically low prosecution rates in rape cases. She warned the quality of investigations into sex attacks has been declining amid “strained relationships” between police and prosecutors, an increase in digital evidence which the service has not kept up with and communication difficulties.

The Government has apologised to tens of thousands of rape victim who have “gone without justice” and are being failed.

Police and prosecutors will be told to end the “obsessive focus on the credibility of the victim” amid fears tens of thousands of women are withdrawing support because they feel like they are not believed and that they are the ones on trial.

In a damning indictment for the criminal justice system, a report by the Government published tonight, stated: “Victims feel let down at every stage”.

Just 1,439 suspects were convicted of rape in England and Wales last year – the lowest level since records began, and down from 1,925 the previous year, despite reports of adult rape to police almost doubling since 2015-16.

Over the same time period, police recorded 59,747 rapes, according to Home Office figures – with the Crime Survey for England and Wales estimating there were 128,000 victims of rape or attempted rape.

The Home Secretary, in a letter to police chief constables seen by the Daily Express, said: “The inherent challenges in investigating rape cases have been exacerbated in recent years by societal changes such as the increased prevalence of digital technologies.

“However, policing has not kept pace with these changes, leading to negative outcomes in terms of the quality and timeliness of referrals to the CPS, as well as the engagement with and treatment of victims.

“I am clear that things need to drastically and quickly improve.

“The victims of these heinous crimes deserve nothing less.”

The review found cuts to police and prosecutor budgets, too few detectives, huge staff turnover, higher workloads as the number of rapes reported to police increased, and increased use of less experienced staff both in the CPS and police all contributed to fewer cases being solved.

But ministers insist they are trying to strengthen the criminal justice system to ensure more criminals are locked up.

Justice Secretary Robert Buckland said: “The first thing I think I need to say is, sorry. It’s not good enough. We’ve got to do a lot better.

“Whilst there have been a number of important successful prosecutions, the overall numbers are just not enough.

“What we’re talking about here is a failure of operations.”

In a joint statement, Ms Patel, Mr Buckland and Attorney General Michael Ellis admitted: “The vast majority of victims do not see the crime against them charged and reach a court: one in two victims withdraw from rape investigations.

“These are trends of which we are deeply ashamed. Victims of rape are being failed.

“Thousands of victims have gone without justice. But this isn’t just about numbers – every instance involves a real person who has suffered a truly terrible crime.

“We owe it to every person whose life has been changed forever by rape to make these changes happen.

“Now is the time for us to step up, to do better, and to deliver lasting improvements to the way we investigate and prosecute rape so that victims are properly supported and they, and the public, can have confidence that perpetrators of this sickening act will feel the full force of the law.”

Police will probe every suspect’s background to ensure they are not a serial sex offender who has escaped the net.

Research has revealed one in four people accused of a sex offence had been named in another assault probe.

Rape victims have repeatedly told how they feel like their lives are being put on trial by officers during interviews and a “digital strip search”, where police and prosecutors trawl through their phones.

Compounding a sense of isolation, victims were left “without phones for months, leaving them without vital support at a time of immense trauma.”

Mr Buckland added: “If you are a victim of a burglary and you report the fact that your house has been unlawfully entered, and items have been taken, apart from giving a description of the home and a few details about what time you went to bed and whether you locked the door, you don’t expect a huge focus upon every aspect of your private life.

“The focus is on who got in your house.

“In rape cases, what is in play has to be whether or not the perpetrator committed the act and the focus should primarily be on the perpetrator, about them, about their circumstances, about where they were, what they did, about their behaviour which led to the allegation being made.”

The Government wants to restore prosecution levels to 2016 levels – even though only one in ten investigations resulted in a charge then.

Ministers have vowed no-one will be left without a phone for more than 24 hours – with spare devices available if investigations are dragging on.

The Justice Secretary added: “It can’t be a fishing expedition. We need everybody to apply the rules and only look at what’s relevant and proportionate – your whole life is not on display.”

Ministers also want to move away from “the obsessive focus on the credibility of the victim”, and police will instead be told to focus on the suspect’s offending history, to “help ensure decision-making is based on evidence, rather than subjective judgments of victim credibility”.

The report added: “We also know that there are patterns of behaviour that are a significant feature of rape and other sexual offending – and that failing to place proper value and emphasis upon understanding a suspect’s offending behaviour and history, including previous reports of offences, can result in an undue focus on victim credibility.”

The Government will also invest more money in independent sexual violence advisers to help victims through the criminal justice system.

And in an alarming reflection of the fragmented system, the review concluded: “Increasingly strained relationships and difficulties in communication between the two organisations impacting negatively on case progression and final outcomes.”

Measures being introduce to boost the number of convictions include a pilot scheme aimed at reducing cross-examination of victims in court by conducting pre-recorded interviews, a nationwide recognition that only evidence about the complainant that is pertinent to the case should be used, and a new approach to investigations which ensures that there is an “early and robust assessment of suspect behaviour and offending patterns”.

Brexit: Boris Johnson given 'misinformation' says Mummery When you subscribe we will use the information you provide to send you these newsletters. Sometimes they’ll include recommendations for other related newsletters or services we offer. Our Privacy Notice explains more about how we use your data, and your rights. You can unsubscribe at any time. The […]

Vice President Kamala Harris will travel to the U.S.-Mexico border on Friday amid pressure from Republicans who have seized on a surge of border crossings to criticize the Biden administration, her office announced on Wednesday. She will travel to El Paso with Alejandro N. Mayorkas, the homeland security secretary. President Biden tapped Ms. Harris to […]