Democratic gripes are increasing, as some critics worry that the department is rubber-stamping Trump-era policies. 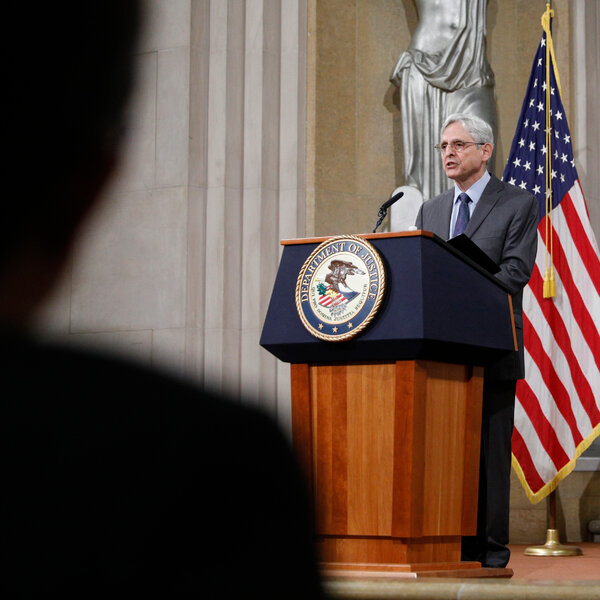 The political news cycle hit home in rare fashion on Monday as the attorney general, Merrick B. Garland, met with newsroom leaders from The Times, CNN and The Washington Post to discuss how the administration was responding to revelations that Donald J. Trump’s Department of Justice had secretly sought information on reporters and their sources.

When a Justice Department gets into the business of seizing reporters’ phone records and trying to track down leakers, while putting gag orders on the news organizations whose records it’s seizing, it’s hard not to wonder about the health of the First Amendment.

So with the revelations now public, Mr. Garland vowed to act. Speaking to members of the Senate Appropriations Committee at a budget hearing last week, he pledged that he would institute new policies that were “the most protective of journalists’ ability to do their jobs in history.”

In Monday’s meeting, the leaders of the news organizations pushed Mr. Garland to pursue accountability for the administration officials who had worked to target journalists and whistle-blowers; Mr. Garland’s responses were kept off the record.

But legal watchdogs and advocates of criminal justice reform say this is far from the only area of concern. They are pointing to a few major areas in which Mr. Garland’s Justice Department has elected to defend Trump-era policies, particularly those orchestrated by former Attorney General William P. Barr.

Mr. Garland has stepped up enforcement of civil rights laws, and he is leading investigations into some major municipal police departments suspected of systematic misconduct. He announced last week that he would take aggressive steps to protect voting rights.

But on a range of other issues, there are gripes coming from within the president’s own party. Some critics have expressed worry that his Department of Justice was rubber-stamping policies that sought to expand the president’s legal immunities, turn back progressive action on racial justice and restrict immigrants’ ability to enter the country legally.

After she publicly made the allegation, in 2019, Mr. Trump said in an interview from the Oval Office that Ms. Carroll was “not my type,” and that he’d never assaulted her. She then filed suit, accusing him of slandering her.

Mr. Barr argued in court that Mr. Trump had been acting as an employee of the federal government when he made the comments, and was therefore shielded from charges of slander and libel.

GB News: UK economy is 'bouncing back' says Boris We use your sign-up to provide content in ways you’ve consented to and to improve our understanding of you. This may include adverts from us and 3rd parties based on our understanding. You can unsubscribe at any time. More info Boris Johnson was grilled by Gary […]

WASHINGTON (Reuters) – The U.S. Senate backed Republican House of Representatives member John Ratcliffe on Thursday as the next director of national intelligence, a victory for President Donald Trump the second time he tapped the conservative lawmaker for the top spot. The Senate backed Ratcliffe’s nomination by 49 to 44, amid stiff opposition from Democrats. […]

Chancellor Rishi Sunak has set out an extra £65bn in COVID support for employees and businesses – but announced a freeze on income tax thresholds and a rise in corporation tax to help pay back the UK’s rising debts. In his budget speech, Mr Sunak set out a three-part plan to “protect jobs and livelihoods […]

U.S. pushes back on call by OPEC+ to join big oil output cuts