Arlene Foster has formally resigned as Northern Ireland’s first minister, with the process of replacing her in danger of derailing the power sharing institutions.

Speaking at Stormont, Mrs Foster paid tribute to her family and said they will see more of her “whether they like it or not” – but added she has “unfinished business” to ensure Northern Ireland succeeds in the future.

During her speech, she continued: “Mr Speaker, colleagues both inside and outside this House know very well that all periods of leadership must come to an end. 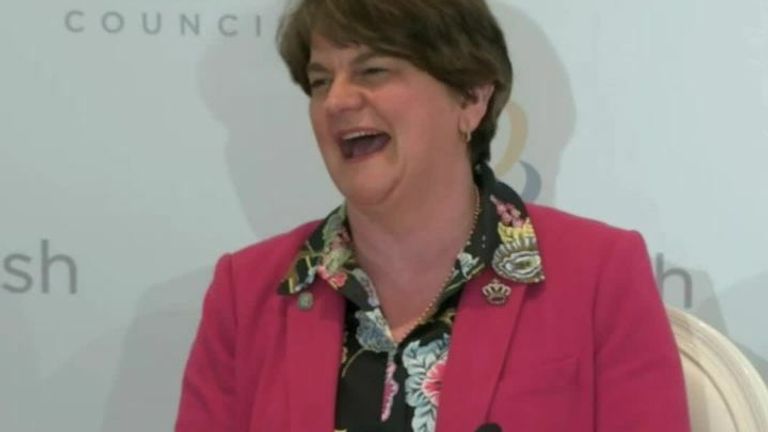 “That is why, when we are privileged and honoured with holding such a position, we must not waste a moment in frivolous brinkmanship but rather forge ahead on behalf of those we represent.

“Whilst I will miss the exchanges from this seat, I am looking forward to fresh challenges.”

Mrs Foster also used her farewell speech to criticise the Northern Ireland Protocol, a key part of the Brexit agreement between the UK and EU designed to avoid a hard border on the island of Ireland.

She said the arrangement had created an “imbalance”.

“It is not a real partnership. An imbalance and an instability is built in that will fester and deteriorate,” she said.

“If Brussels continues to think the protocol is enough, they are in denial.

“Imbalance and instability in the context of Northern Ireland is a truly dangerous cocktail.

“Northern Ireland is part of the United Kingdom and needs to be treated as such.” 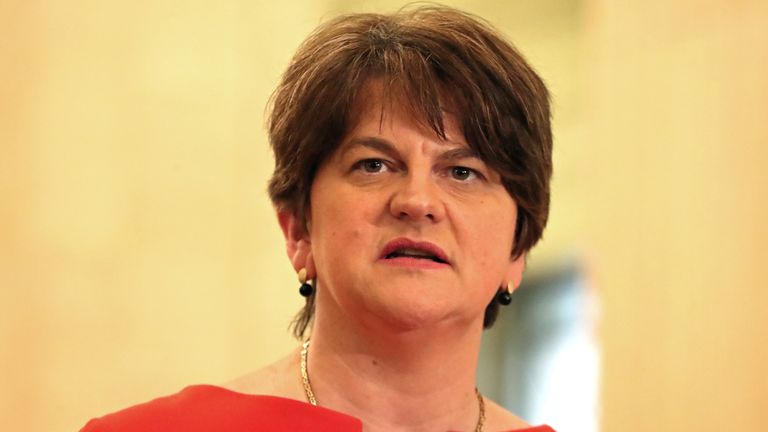 Edwin Poots, who succeeded Mrs Foster as Democratic Unionist Party leader, said history will be “kind” to his predecessor, who enjoyed a “hugely successful” career.

“I believe history will be very kind to Arlene, it should be very kind to her because she has done a considerable course of work in ensuring that we move forward,” he said.

“Even after the difficult times of 2017 with the collapse of devolution, the commitment was there, and always there to ensure that we could get back together again, that we could take people forward again.

“And they could ensure that the public had this place to make decisions for them on their behalf.”

Mrs Foster’s move, which came into effect at 1pm, begins the countdown on a seven-day timeframe in which the DUP must renominate its chosen successor, Paul Givan.

But a dispute between the two parties on the issue of Irish language legislation is in danger of scuppering the process.

If one of the parties fails to renominate their candidate within the given time, a properly functioning executive cannot be formed.

In this scenario, the UK government assumes a legal responsibility to call a snap Assembly election.

Analysis: Clock is ticking – and an accidental election might be round the corner
By David Blevins, senior Ireland correspondent

When the DUP ousted Arlene Foster as leader in April, they may not have fully appreciated where it could lead.

But Sinn Fein won’t nominate a deputy first minister to ratify the DUP’s Paul Givan to succeed Mrs Foster without commitments on issues like the Irish language.

If they can’t resolve their differences within seven days, the power-sharing government will collapse again, almost certainly triggering a snap election in the autumn.

If Boris Johnson thought he had a problem with the Northern Ireland Protocol at G7, he might have a bigger one with no Stormont government by next Monday.

Tensions over the Brexit border in the Irish Sea and the potential collapse of power-sharing at Stormont would cause very real security concerns during the summer marching season.

The clock is ticking.

Labour: Left has to 'regroup' says Len McCluskey We use your sign-up to provide content in ways you’ve consented to and to improve our understanding of you. This may include adverts from us and 3rd parties based on our understanding. You can unsubscribe at any time. More info In his memoirs due to be published […]

Singapore could go to the polls in early July

As Singapore’s economy faces a rocky road ahead, political observers expect the general election to be called soon, with voters going to the polls in early July. Doing so, they said, would allow the People’s Action Party (PAP) to get a mandate for a fresh five-year term and turn its attention to other pressing issues, […]

The chief medical officer at a Mumbai hospital, honored for her work to fight Covid, died with the disease.

Australia to suffer a ‘once in a century’ economic contraction: central bank governor