May has been a total washout, with near-record setting levels of rainfall across the UK. More rain has already fallen in England, Scotland, Wales and Northern Ireland during May than would normally be expected in the whole month – after 2020’s dry and sunny May, 2021 has left little to be desired. But meteorologists are finally forecasting a change.

The low pressure which has been stubbornly stuck over the UK is finally shifting, and with it, we will see clearer skies.

BBC Meteorologist Tomasz Schafernaker tweeted: “You won’t believe this…but we’re increasingly confident that the weather will FINALLY be settling down end of this week and into the weekend!

“Too early to make a call for the #BankHoliday, but we might be fine too… #warmingup” 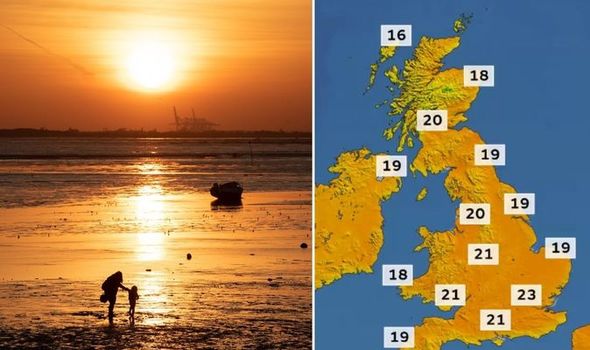 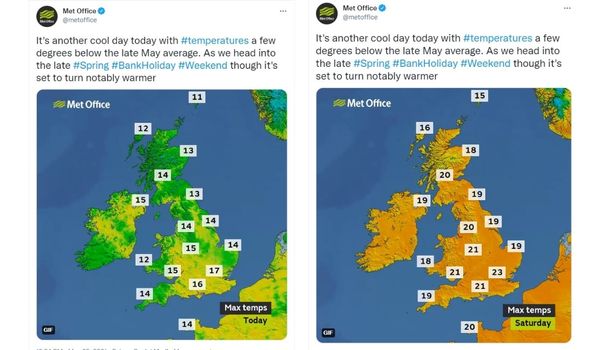 She went on: “From the middle of this week pressure will become higher, leading to drier and brighter conditions for many.

“It’ll feel warmer than recently, too, with temperatures returning to around average for the time of year.

“There will still be some scattered showers, but they will be fewer and far between than recently and lighter.

“Some rain is also likely for northern and western areas at times – but overall, most places will be largely dry for the rest of the week.” 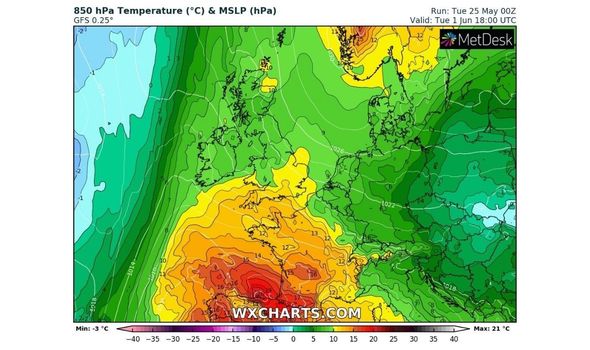 The Met Office’s forecast said it expects “mainly fine and settled conditions” across the UK from Friday, with temperatures “feeling locally warm in southern and central areas”.

The agency said temperatures will be “warmer than recently and feeling pleasant in sunshine”.

For the bank holiday weekend, the Met Office said: “High pressure will be the largely dominant feature across the UK during this period.

“This will bring mainly fine and settled conditions across the UK, with temperatures recovering and feeling locally warm in southern and central areas.”

This news will be more than welcomed by many after the non-stop rain in May saw pub gardens washed out amid lockdown easing.

The Met Office explained to Express.co.uk that the spell of bad weather was down to “the position of the jet stream”.

The jet stream is a core of strong winds around five to seven miles above the Earth’s surface, blowing from west to east.

The jet stream causes changes in the wind and pressure, affecting conditions at the Earth’s surface and shaping our weather.

The Met Office spokesman said: “As we go into May we usually start to see the Jetstream move to the north of the UK, either for long periods like we saw last year when we had the sunniest month on record.

“But this year, we’ve had the jet stream fairly well over us or even just to the south, which has enabled the influence of low pressure to come across the Atlantic and influence our weather. 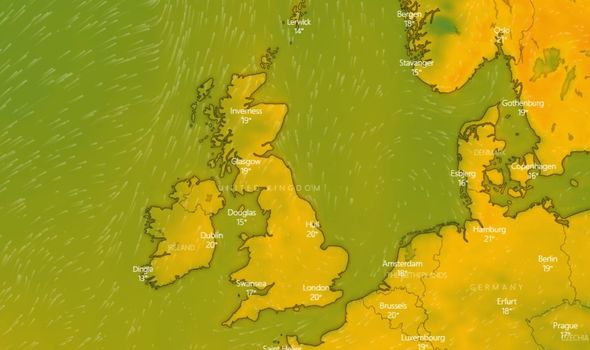 Wales has endured its wettest May on record, with double the average rainfall for the month already recorded by the close of Saturday.

The Welsh have seen 184mm of rain, which represents 214 percent of the monthly average.

The first weekend of significantly relaxed coronavirus restrictions in England was also wet and windy for many, with gusts north of 60mph.

There’s even been snow in the Lake District this month.

But it’s all set to change soon, so get your suncream out and pack your jumpers away – for now, at least.

An unprecedented flood of NSW police officers, including heavily armed riot squad officers, and several hundred extra Australian Defence Force (ADF) personnel will inundate Sydney in a major lockdown compliance operation. The extraordinary show of force, beginning this weekend, is in response to the worsening Covid-19 crisis in NSW, which on Saturday recorded its worst […]

Meghan and Harry ‘must think about future’ after ‘bad PR’, expert claims

A royal commentator has claimed that Meghan Markle and Prince Harry may have to adopt a new media strategy after “bad PR” has resulted in them needing to “seriously think” about their brand in the future. The Duke and Duchess of Sussex have embarked on several initiatives since stepping back as senior royals in March […]

By Tushar Goenka BENGALURU (Reuters) – The battered Indian rupee will weaken further against the dollar over the coming year as a significant pickup in economic growth is unlikely, according to a Reuters poll of strategists who said the coronavirus outbreak was a downside risk. While Reserve Bank of India Governor Shaktikanta Das has said […]

Santander Brazil boss Rial given more say with board role

Equinor head of exploration Dodson to step down