WASHINGTON — As dissension boiled in their ranks, House Republicans quickly turned on the chairman of their conference, the member of the leadership team responsible for party messaging. After a swift vote, the occupant of that office was unceremoniously dumped.

The year was 1998 and the ousted leader was Representative John A. Boehner, Republican of Ohio, who became a casualty of election losses that November and internal unrest over the tumultuous reign of Speaker Newt Gingrich.

It was an episode that could be instructive for Representative Liz Cheney of Wyoming, who was bounced from that same leadership post on Wednesday for speaking out about Donald J. Trump’s election lies and Republican denialism surrounding the Jan. 6 assault on the Capitol. Mr. Boehner famously proved that being out does not necessarily mean being down — at least not forever — when he resurrected himself eight years later to become the leader of the party and ultimately speaker in 2011.

“Now before me, most people in my position just left,” Mr. Boehner said in an interview recounting his fall and rise. “You know, I wasn’t that smart.”

Whether Ms. Cheney could duplicate that accomplishment and find her way back to power in the House or elsewhere at the pinnacle of Republican politics will be determined later. Mr. Boehner, a co-host of a recent fund-raising event for her, said he was not inclined to dispense advice. But he said he believed she had opportunities.

“She is a smart lady and she has a big platform,” he said. “The question is, how do you play those cards?”

From her comments and actions this week, Ms. Cheney seems to want to play them aggressively and publicly. She vowed on Wednesday to lead the effort to steer her party away from Mr. Trump and return it to the more traditional conservative roots she and Mr. Boehner represent.

“The nation needs a party that is based upon fundamental principles of conservatives,” she told reporters. “And I am committed and dedicated to ensuring that’s how this party goes forward. And I plan to lead the fight to do that.”

Mr. Boehner took a different approach to his exile from the leadership ranks after the 1998 election. The ostensible cause was the unexpected loss of Republican House seats after the party impeached President Bill Clinton — a move that Mr. Boehner now acknowledges was a mistake. In his new, aptly-titled book “On the House,” Mr. Boehner says he regrets the attempt to remove Mr. Clinton, which he said he should have opposed. Mr. Boehner also recounts how he was the one responsible for informing Mr. Gingrich that he had to go after the disappointing election showing.

Before long, Mr. Boehner discovered that he was going to go as well. 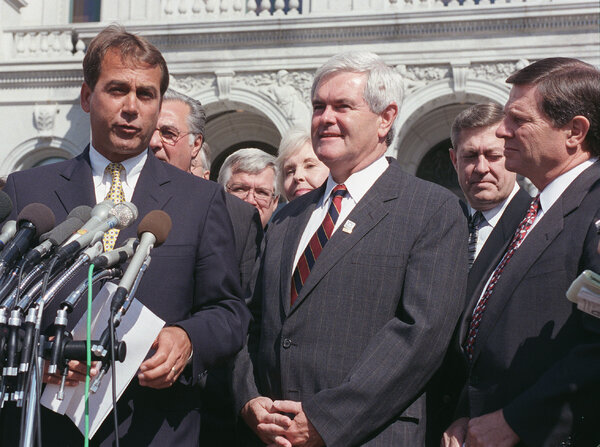 Discontented Republicans were looking for scalps and Mr. Boehner, then the fourth-ranking leader, was a big target once restless lawmakers failed to unseat Representative Dick Armey of Texas, the majority leader. No one was willing to challenge Tom DeLay, the hard-edge Texan and highly combative whip in the No. 3 position. That left Mr. Boehner, who found himself facing Representative J.C. Watts, the sole Black Republican in the House and a popular college football star from Oklahoma.

Mr. Boehner initially believed he could prevail. He then discovered that Mr. Watts was backed by some influential old-school Republicans who had not appreciated Mr. Boehner’s rabble-rousing. He had blasted lawmakers’ abuses of a sketchy House bank — a scandal involving both Democrats and Republicans — and attacked spending earmarks — the political bread and butter of lawmakers of both parties — as corrupt and wasteful.

“They didn’t care much for me as the anti-earmarks guy,” Mr. Boehner recalled. “I wasn’t their cup of tea. They saw a chance with me and they took it.”

As he entered the decisive meeting, Mr. Boehner said he told a staff adviser that he refused to exhibit an “ounce of disappointment.” He quickly decided he would try to mount a comeback, telling himself, “I am just going to put my head down and work my way back.”

Mr. Boehner maneuvered himself into the chairmanship of the Education and Workforce Committee with the beginning of the George W. Bush administration in 2001 and helped write the No Child Left Behind Act with Senator Edward M. Kennedy, Democrat of Massachusetts. The bipartisan initiative riled some Republicans, but it won him the respect and gratitude of Mr. Bush.

Biding his time, he regularly sat smoking in the speaker’s lobby off the House floor, engaging reporters both on and off the record and occasionally sniping at the performance of the often-struggling Republican House leadership — “feeding the alligators,” as he describes dealing with the news media in his book. He provided a handy foil and insight as a former leader himself.

“It just took patience,” said Michael Steel, a former adviser to Mr. Boehner who is now a partner at Hamilton Place Strategies. “He spent a number of years on the outside looking in before events came together to make his brand of reform-minded conservatism appeal to the conference again.”

Those events centered on Mr. DeLay, who inevitably found himself in a quagmire of legal and ethics troubles that led him to resign as majority leader in January 2006, opening the door to a Boehner revival. With Republicans eager for a new face without the baggage of the DeLay era, Mr. Boehner jumped into the race and won a surprise victory in a three-way race. He became the top Republican in 2007 after the party lost its majority in the 2006 midterm elections, and then became speaker in 2011 after the backlash to the Affordable Care Act ignited the Tea Party movement that swept Republicans back to power.

“I always thought I had a shot to get back,” he said. “I felt I had no choice but to play it out. It worked out fine.”

One big difference between Mr. Boehner’s situation and Ms. Cheney’s is that the House Republicans who restored him in 2006 were more closely aligned with the traditional strain of Republicanism he represented — fiscally conservative lawmakers who favor small government but nonetheless recognized the value of government programs and wanted to get things done.

But the Tea Party movement delivered a large contingent of a new kind of hard-right Republicans — “knuckleheads” in Mr. Boehner’s vernacular — who were more interested in upending government, spreading conspiracy theories and waging culture wars. Mr. Boehner regularly wrestled with them until they eventually drove him from the speakership in 2015. They played leading roles in the undoing of Ms. Cheney this week.

For Ms. Cheney to regain a leadership slot would seem to require a wholesale makeover of her party — an unlikely event in the current Trump era of Republican politics. Though she insists she is running for re-election to the House, Ms. Cheney might have her eye on higher office, including a presidential run. On Friday, she is scheduled to call in to a New Hampshire news radio show, getting a jump on the primary race there.

While the White House might seem a stretch at the moment, Mr. Boehner’s experience showed that being expelled from the top of the House hierarchy was not necessarily the end. Now it is up to Ms. Cheney to decide how best to begin again.

“She’s got options and she’s got her own future,” Mr. Boehner said. “She is going to have to figure out what she wants to do with it.”

Nicola Sturgeon sends message to EU citizens in Scotland When you subscribe we will use the information you provide to send you these newsletters. Sometimes they’ll include recommendations for other related newsletters or services we offer. Our Privacy Notice explains more about how we use your data, and your rights. You can unsubscribe at any […]

We will use your email address only for sending you newsletters. Please see our Privacy Notice for details of your data protection rights. Coronavirus press conferences have become part of Britain’s daily routine – with scientists, MPs and the Prime Minister updating the public on the fight against coronavirus. Figures on cases and deaths, new […]

‘Learn to live with it!’ IDS defends Boris’ decision to scrap Covid measures

Iain Duncan Smith 'completely in favour' of ending Covid rules We use your sign-up to provide content in ways you’ve consented to and to improve our understanding of you. This may include adverts from us and 3rd parties based on our understanding. You can unsubscribe at any time. More info Tory MP Sir Iain Duncan […]

Trump: It’s my decision when to reopen U.S. economy