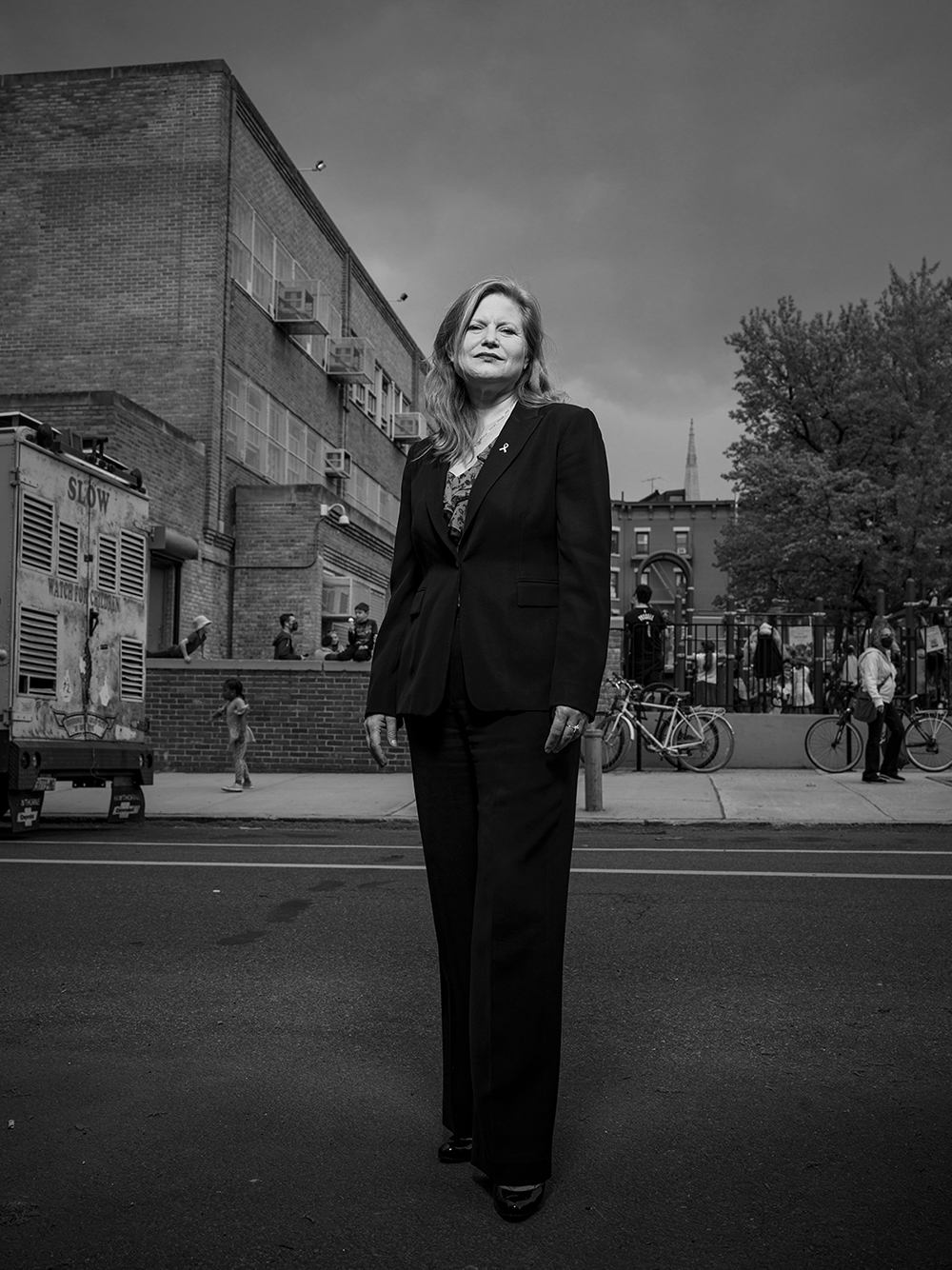 Her ideas and experience
stand out in a crowded field of
Democratic hopefuls.

Her ideas and experience
stand out in a crowded field of
Democratic hopefuls.

By The Editorial Board

The editorial board is a group of opinion journalists whose views are informed by expertise, research, debate and certain longstanding values. It is separate from the newsroom.

The mix of optimism and anxiety that New Yorkers feel as the coronavirus is beaten back in the five boroughs highlights the extraordinary challenges facing the city and its next mayor in the coming months and years.

New York isn’t dead. But to make it flourish again, those who stuck with the city through the Covid-19 pandemic face significant headwinds to resuscitate businesses and revive economic life, bring teachers and students back to the classroom, restore stricken lives and shuttered communities and quell an alarming spike in violent crime.

Even as the immediate crisis needs to be vanquished, this great city also needs a mayor who will make progress on persistent problems like transportation, housing, education and poverty. The city requires someone who can take charge right away, with fervor and confidence.

All of the candidates in the June 22 Democratic primary are concerned with the welfare of their city and have thoughtful ideas about how to better it. It is Kathryn Garcia who best understands how to get New York back on its feet and has the temperament and the experience to do so. Ms. Garcia has our endorsement in perhaps the most consequential mayoral contest in a generation.

Voters could be forgiven for knowing little about Ms. Garcia. The pandemic has, to an alarming degree, hustled the hustings out of the neighborhoods and onto Zoom. The early polls in the race show that simple name recognition can have a big impact — on the early polls. Many primary voters say they haven’t made up their minds. So we’d like to help them.

A go-to problem solver for the past decade, Ms. Garcia was hard to miss at City Hall — a confident, gravelly-voiced woman who ran an overwhelmingly male Sanitation Department. She has a zeal for making government work better and was often known to show up ahead of a 6 a.m. shift for roll call not to micromanage but to find out how her people were doing.

At the Department of Environmental Protection under Mayor Michael Bloomberg, when swaths of New York City lost power during Superstorm Sandy, knocking out the city’s wastewater treatment systems, it was Ms. Garcia who got them back up and running.

When she arrived at the Sanitation Department as commissioner in 2014, snowplow routes were still maintained on paper. Ms. Garcia modernized the system, finally allowing the agency to track snowplows in real time through the city’s 19,000 lane miles. She cut traffic from commercial garbage trucks in half, making streets quieter, safer and less polluted.

In 2019, in the wake of a lead paint scandal that sickened hundreds of children living in public housing, Mayor Bill de Blasio tapped Ms. Garcia to lead an overhaul of the New York City Housing Authority. That summer, childhood lead poisoning fell by 21 percent from the same period the year before.

When the coronavirus struck, she shifted trash pickup to late night and early morning hours, an effort to protect thousands of city workers and the public they normally interact with. She also managed an operation that has delivered more than 200 million meals to hungry New Yorkers during the pandemic.

Public service runs in Ms. Garcia’s family. Her father was the chief labor negotiator for former Mayor Ed Koch and, for several years, the head of the Long Island Rail Road. Her mother was an English professor at Medgar Evers College.

Ms. Garcia was adopted and grew up in a multiracial family in Brooklyn. (Two of her siblings are Black; Ms. Garcia is white.) She still lives in Park Slope, where she grew up and later raised her two children.

Ms. Garcia’s many years of experience — she first joined the Sanitation Department as a 22-year-old intern — have helped her develop laudable plans for the city that are also achievable: Provide free child care up to age 3 for families earning less than $70,000 a year. Implement bilingual programs in every elementary school. Transform Rikers Island into a hub for renewable energy, with charging stations for the city’s electric vehicle fleet. Expand rapid bus lanes. Create more green space in low-income neighborhoods. Address the city’s centuries-old trash problem by getting refuse off the sidewalks and tucked away into nicer-looking, rat-resistant containers.

She is also committed to reforming the New York Police Department. That begins with speeding up and strengthening the disciplinary process, reforming the promotion process, raising the age for recruits to 25 from 21 and requiring them to live in the five boroughs. In picking a commissioner, she said, too many mayors have looked for “a cop’s cop.” She said she would look for one who is “prepared for culture change, which means that you’re going to have to take some tough stances.” As an example, she said, officers who did not wear masks during last year’s protests should have been docked pay.

Eric Adams, Brooklyn’s borough president, is doing well in early polls. Mr. Adams, who was born in Brownsville, is a former N.Y.P.D. captain who became known as an outspoken crusader against police brutality when crime was rampant and law-and-order policing largely went unquestioned in the city. Mr. Adams has strong working-class support, but we have some concerns about his record as a politician over the years.

Scott Stringer, the city’s comptroller, has years of government experience and good ideas for improving New York City. But his candidacy has been clouded by the recent accusation by Jean Kim, a lobbyist who once worked for him, that he groped her and tried to pressure her to have sex with him in 2001. Mr. Stringer strongly denies her allegations. Voters will have to come to their own conclusions.

We have concerns about how Maya Wiley, a civil rights lawyer who served as a counsel to Mr. de Blasio, would do as a manager of the vast city bureaucracy. The former Citi executive Ray McGuire, though he has an impressive biography and is trusted by New York’s business community, seems detached from the pulse of the city. Shaun Donovan appears more like a Washington insider than a big city mayor. We worry that the former nonprofit executive Dianne Morales lacks the experience needed and has politics too far out of the mainstream to be a successful mayor.

The tech entrepreneur and former presidential candidate Andrew Yang has led in many early polls, promising to make the city fun again, with an attractive optimism. But nothing so far suggests that he has the experience to run New York City on Day 1. (Credit or criticism where it is due: We did say when he sought our endorsement for the Democratic nominee for president that we hoped he would get involved with New York politics.)

Mr. Yang offers the sharpest focus in the race on the important role the mayor will play in luring people back to the city as the pandemic ends; other candidates have focused on those who never left. Today’s New York, however, requires leadership that will prioritize both.

The city’s recovery and its longer-term future also depend on a mayor who will understand and work the levers of good government. So do its most vulnerable residents. Substance matters for the challenges that lie ahead, when federal aid money dries up, eviction moratoriums end and the final bills for the pandemic come due.

Kathryn Garcia can run a government that delivers for all New Yorkers. She would be the first woman to hold the office, but there are many other reasons to give her the job. Even the front-runner agrees: Mr. Yang has praised Ms. Garcia and repeatedly suggested he would hire her to run the city. “If Andrew Yang thinks I need to run his government, then maybe I should just run the government,” Ms. Garcia told us.

Agreed. Cut out the middleman and elect the most qualified person: Kathryn Garcia.

Opinion | Only Impeachment Can Save Republicans

If there’s one thing Republicans in Congress ought to consider as they weigh the merits of impeaching Donald Trump, it’s the story of the president’s relationship with Mike Pence. In December 2015, then-Governor Pence tweeted, “Calls to ban Muslims from entering the U.S. are offensive and unconstitutional.” In April 2016, Tim Alberta reported that Pence […]

Opinion | ‘All Things Seemed Possible for Humanity’: Why We Watch the Olympics

My 4-year-old buried his head in my hip and let out a short, gaspy shriek. It could have been thrill. It could have been fear. Maybe both? We were watching a video of Simone Biles’s qualifying floor routine at the Tokyo Olympics — the first Games my son will experience. Though he had trouble expressing […]

One Family. Three Generations. Living in Georgia. Photographed by Wulf Bradley Text by Kristin Lin Supported by Leading up to the state’s U.S. Senate runoffs, the Gamel family shared their thoughts on voting and the current political climate. By Kristin Lin Photographs by Wulf Bradley Ms. Lin is a fellow with the Opinion section. Mr. […]