The Microsoft billionaire’s wife said in 2019 her marriage was “irretrievably broken”, The Wall Street Journal reported over the weekend. It said she had been working with divorce lawyers since 2019 to finalise the break-up of a marriage that lasted more than 25 years. Bill Gates had flown with Epstein on the convicted paedophile’s jet from New Jersey to Palm Beach, Florida, as far back as 2013, which was four years after Epstein had spent time in jail for soliciting a minor under the age of 18 for sex.

The Wall Street Journal, citing a former employee of their charity, the Bill & Melinda Gates Foundation, has reported Melinda Gates had been worried about her husband’s relationship with Epstein since 2013.

These concerns came to a head several years later and she had been talking to divorce lawyer Robert Stephan Cohen as far back as October 2019, the paper said.

During that same month, the New York had reported Bill Gates had met with convicted paedophile Epstein on several occasions, and had once stayed late at his townhouse in the US city.

At the time, a spokeswoman for the Microsoft billionaire the meetings had focused on philanthropy. 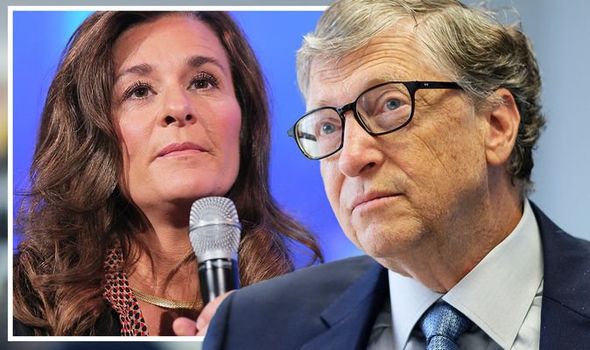 Epstein had already served 18 months in a Florida prison on sex crimes charges in a 2008 plea deal.

When the meetings first came to light, Bill told The Wall Street Journal in 2019: “I met him. I didn’t have any business relationship or friendship with him.”

Bill and Melinda Gates, who between them have an estimated fortune worth $130billion (£92.4billion), signed their divorce filing on May 3.

The couple had previously announced their three children will inherit $10million each, with the rest donated to charity, under The Giving Pledge.

Neither Bill or Melinda Gates have not revealed a specific reason for their divorce, which will end more than 25 years of marriage.

They still to work together on the Bill and Melinda Gates Foundation.

A source told PEOPLE: “They were really interested in trying to win a Nobel Prize.

“So one thing that was part of this is, if it gets worse, then it ends that.

“It seems as if that was on the agenda, and that’s for both of them.”

Bill and Melinda Gates issued a joint statement on the Twitter accounts last Monday to confirm they were divorcing.

The couple will continue their work at the foundation “but we no longer believe we can grow together as a couple in this next phase of our lives”.

The statement read: “After a great deal of thought and a lot of work, we have made the decision to end our marriage.

“Over the last 27 years, we have raised three incredible children and built a foundation that works all over the world to enable all people to lead healthy, productive lives.

“We continue to share a belief in that mission and will continue to work together at the foundation.

“But we no longer believe we can grow together as a couple in this next phase of our lives.

“We ask for space and privacy for our family as we begin to navigate this new life.”

Express.co.uk has contacted the  Bill and Melinda Gates Foundation for comment.

When you subscribe we will use the information you provide to send you these newsletters. Sometimes they’ll include recommendations for other related newsletters or services we offer. Our Privacy Notice explains more about how we use your data, and your rights. You can unsubscribe at any time. The warning was issued bt Tsunami Service Provider […]

Germany and Belgium floods: At least 44 dead and more than 70 missing after heavy rain

At least 44 people have died and more than 70 are missing after record rainfall triggered severe floods in western Germany and neighbouring Belgium. Forty-two of the fatalities were in Germany, with Chancellor Angela Merkel calling the situation a “catastrophe” as she expressed solidarity with those affected by the flooding. The dead including 18 in […]

LONDON (Reuters) – Renault <RENA.PA> will resume production at the factory it runs with Dongfeng Group <0489.HK> in Wuhan, Hubei province and the epicenter of the outbreak of a new flu-like virus, on Feb. 10, a spokeswoman for the French carmaker said on Tuesday. The reopening of the plant will be eight days after the […]

‘Get off my lawn!’ Scott Morrison told off by resident as Australia PM in awkward moment