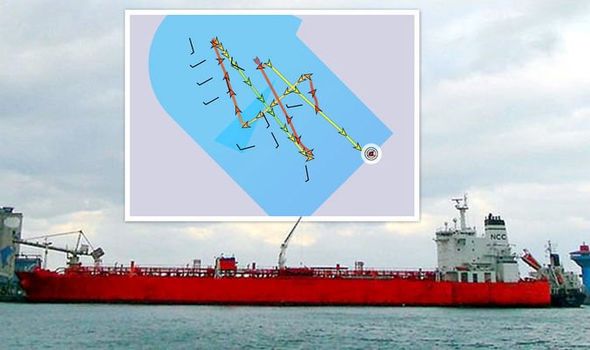 Dryad Global received “unconfirmed reports” that an oil tanker – which could be the NCC Dammam – was attacked, the maritime security group said on Twitter today. There is still no immediate confirmation from the Saudi authorities.

They tweeted: “For nearer three and a half hours the NCC DAMMAM has been showing the status of ‘Not Under Command’ on Marine Traffic.”

They confirmed the reports and said “investigations are ongoing”.

The term “vessel not under command” means a vessel that through some exceptional circumstance is unable to manoeuvre.

This means it is unable to keep out of the way of another vessel.

It is believed the vessel is owned by Saudia Arabia and was built in 2008.

One person on Twitter said the oil tanker “handles petroleum and chemical materials”.

According to Neptune P2P Group, the King Fahd Port are “transmitting a warning message” informing ships to be “vigilant”.

They wrote: “King Fahd Port control are transmitting a warning message on VHF CH 11 instructing ships to be vigilant and monitor the North and South entrance for suspicious small boat activity.

“It has been reported that an unidentified vessel may have suffered an explosion and black smoke has been spotted in the approaches to the South port entrance.

“The report of an explosion has yet to be confirmed by the port authorities but the sighting of black smoke has been verified by shipping awaiting entry to the port.”

Vessels have previously come under attack in Red Sea waters.

In December, Saudi Arabia said that a tanker anchored at Jeddah port was hit by an explosive-laden boat.

This followed a separate incident at another Saudi terminal on the Red Sea where a tanker was damaged by an explosion.

A Saudi Arabian-led military coalition engaged in Yemen has in the past foiled attempted assaults using explosive-laden boats it says are launched by Yemen’s Iran-aligned Houthi movement.

Randy Brits just won’t stop romping in a historic church graveyard. Couples have been using the 6th century church as a meeting spot to get frisky and sunbathe naked in broad daylight, locals say. Residents close to the Greek Orthodox Church of St Andrew, Torquay, claim visitors keep carrying out "lewd acts" in the graveyard […]

By Lisa Lambert WASHINGTON (Reuters) – The U.S. unemployment rate will shoot past 10% in the second quarter and the growth rate of gross domestic product will decline by more than 7% as the coronavirus crisis grips the U.S. economy, according to projections released by the Congressional Budget Office (CBO) on Thursday. Interest rates on […]

This is another News Portal > Business > Dollar gets respite from pick up in U.S. manufacturing before jobs report