Ventilators are among more than 600 pieces of life-saving medical equipment being sent from the UK to India as the country battles a surge in COVID-19 cases.

Prime Minister Boris Johnson has vowed to “stand side by side” with India as it struggles with its highest numbers of new daily coronavirus cases to date since the pandemic began.

On Sunday – for the fourth day in a row – India set a new global record for daily COVID infections.

India’s health ministry reported 349,691 cases on Sunday, bringing the total to 16.96 million, second only to the US.

The surge in cases has been accompanied by severe shortages of medical oxygen in some areas, with hospitals warning they could run out within hours.

Following discussions with Indian ministers, the UK is sending a first shipment of supplies on Sunday – due to arrive in New Delhi in the early hours of Tuesday – with further shipments to follow.

In total, nine airline container loads of supplies – including 495 oxygen concentrators, 120 non-invasive ventilators and 20 manual ventilators – will be sent to India from the UK this week.

Mr Johnson, who had been due to visit India this week but cancelled his trip amid the surge in COVID cases, said: “We stand side by side with India as a friend and partner during what is a deeply concerning time in the fight against COVID-19.

“Vital medical equipment, including hundreds of oxygen concentrators and ventilators, is now on its way from the UK to India to support efforts to prevent the tragic loss of life from this terrible virus.

“We will continue to work closely with the Indian government during this difficult time and I’m determined to make sure that the UK does everything it can to support the international community in the global fight against pandemic.” 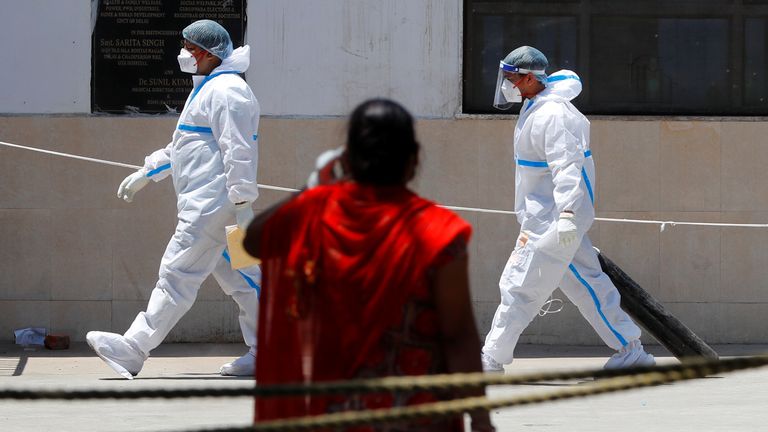 The Department of Health and Social Care worked with the NHS, as well as UK suppliers and manufacturers, to identify reserve supplies that could be sent to India.

And ministers will work closely with their Indian counterparts to decide what further aid could be sent in the coming days.

Health Secretary Matt Hancock said: “The heart-breaking scenes in India show once again how awful this terrible disease is.

“We are determined to support the people of India through this very difficult time, and I am hugely grateful to those who have worked hard to make this initial delivery happen.

“This first delivery of life saving equipment will provide much needed assistance and we stand ready to do more.” 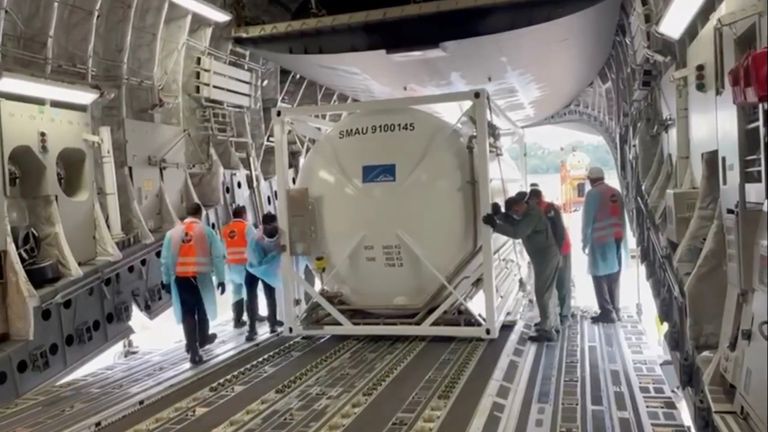 Oxygen and medical supplies are also set to be sent to India from the EU, after European Commission President Ursula von der Leyen said she was “alarmed” by the situation.

The White House has indicated that support will also be coming from Washington – and oxygen tanks have already been loaded on to aircraft in Singapore to be flown into India.

Meanwhile, tankers carrying oxygen supplies have been transported by train across India.

Footage was released of a train transporting vehicles laden with liquid oxygen from Bokaro to Lucknow on Sunday. 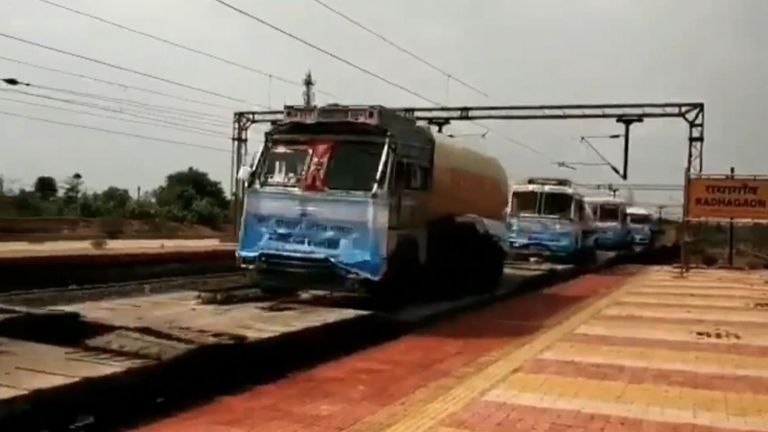 Max Healthcare, which runs a network of hospitals in northern India, said it could run out in under two hours as it posted an “SOS” message on Twitter.

Another big chain, Fortis Healthcare, said it was “running on backup”.

“Every hospital is running out. We are running out,” Dr Sudhanshu Bankata, executive director of Batra Hospital in the capital, told New Delhi Television.

‘Catastrophe for unionism’: Sinn Fein will break up the UK if they win in Northern Ireland

GB News: Sinn Fein will break up UK if they win in Northern Ireland We use your sign-up to provide content in ways you’ve consented to and to improve our understanding of you. This may include adverts from us and 3rd parties based on our understanding. You can unsubscribe at any time. More info Former […]

Boris Johnson marries Carrie Symonds 'in private ceremony' We use your sign-up to provide content in ways you’ve consented to and to improve our understanding of you. This may include adverts from us and 3rd parties based on our understanding. You can unsubscribe at any time. More info A report alleged the Prime Minister was […]

WASHINGTON — Early this year, Senator David Perdue, Republican of Georgia, sold more than $1 million worth of stock in the financial company Cardlytics, where he once served on the board. Six weeks later, its share price tumbled when the company’s founder announced he would step down as chief executive and the firm said its […]

Resiliency test: How well can Chinese firms cope financially from a virus hit?